After the worst recession since the Great Depression, unemployment in the United States remains high. Army recruiters have credited the weak economy with a rise in recruitment numbers for years. Not only did the Army meet its recruitment goals for Fiscal Year 2012, in its analysis of FY2010 accessions to the U.S. Army, National Priorities Project (NPP) finds great gains in terms of recruit quality, particularly with respect to the educational attainment of recruits.

The Army reported a goal for FY2010 of 74,500 active Army recruits and maintained that goal throughout the year. In October 2010, they said that the goal was met with 74,577 recruits.1 Why do given Army numbers differ from those analyzed by NPP? First, the Army reports numbers of “contracts” rather than “accessions;” that is, the Army provides the number of recruits who signed a contract agreeing to join, while NPP looks at the number of recruits who arrive at boot camp or “accede.” Second, the data in this report is non-prior service recruits only, which is defined as a recruit who has not served in the armed forces for more than 180 days previously. Third, the Army counts individuals who sign a contract agreeing to deploy later (known as the Delayed Entry Program or DEP) when they sign the contract, while NPP's data would capture these recruits when they report for basic training.

Of the 70,026 recruits in FY2010, 1,111 came from U.S. Possessions and Territories, including the Federated States of Micronesia, Guam, Puerto Rico, the U.S. Virgin Islands, and foreign addresses, including military postal addresses. The vast majority of recruits come from the United States, 68,915 this year. For some parts of our analysis, we use zip-code level data from the U.S. Census Bureau to give us a better idea of recruits’ backgrounds. About 1 percent of recruits report zip codes that are inconsistent with their reported hometowns. When we use Census data, we therefore restrict our analysis to the 68,129 recruits for whom we have consistent data.

This year's recruit pool was slightly more male, younger, and more racially diverse than last year. Note that Hispanic is considered an ethnicity and not a race by both the U.S. Army and the Census Bureau. An individual may belong to both an ethnic and a racial group, which leads to overlap among those who identify as Hispanic and black, Asian, white, or Native.

For the first year since NPP began tracking military recruitment statistics in 2004, the Army not only met this goal but surpassed it. 96.8 percent of accessions in FY2010 had a high school diploma or better.

However, recent research indicates that modern high school education is failing to prepare graduates for the military. According to a report released in December 2010 by The Education Trust entitled “Shut Out of the Military: Today's High School Education Doesn't Mean You're Ready for Today's Army,” 1 in 5 high school students failed to qualify for enlistment in the Army based on their Armed Forces Qualification Test score.3 Students of color were more likely to fail the test. For future recruit pools, DoD may need to reconsider the value placed on a high school diploma if educational standards do not produce enough recruits able to pass the Armed Forces Qualification Test.

Each recruit is scored on a scale of 0-99 when they take the Armed Forces Qualification Test (AFQT) before beginning duty. This score is a percentile instead of an absolute and indicates where the recruit scored compared to 18-23 year old civilians who took the test in 1997 as part of a norming study.

In previous years, the Department of Defense supplied NPP with the actual score of each recruit. For FY2010, they created three categories of scores and assigned one to each recruit (scores of 99-50, 49-31, and 30 or less). For the last category, NPP assumes this is solely Category IV recruits (with scores of 10-30) due to both the low incidence of these scores and the policy of barring those with AFQT percentiles of less than 10 from joining.

Until 2006, DoD's goal was a minimum of 67 percent of recruits testing at least in the 50th percentile of the AFQT, with scores falling into TSCs I – IIIA (99-50) and indicating average to above average trainability. That goal has since been lowered to 60 percent of recruits in these categories. The Army met their current standard with 63.9 percent of recruits scoring in TSC I-IIIA in FY2010, although this represents a decrease from the FY2009 rate of 66.4 percent.

At the other end of the scoring spectrum, DoD set the goal of 4 percent or less of recruits scoring in categories IV (10-30). FY2010 not only continued the trend of meeting this goal, but low-scoring recruits were almost non-existent. A mere 273 recruits out of 70,026 (or 0.38 percent) scored in this range.

The Department of Defense defines a “high quality” recruit based on a combination of educational attainment and AFQT score. A “high quality” recruit is one who scores at or above the 50th percentile on the AFQT (Categories I – IIIA) and who is Tier 1 (has a regular high school diploma or better). DoD strives to have all recruits be “high quality” as these recruits will be more likely to complete contracted enlistment terms and perform better during training and in the service.

The number of recruits from a given location is useful information, but it does not give a complete picture of recruitment. For example, in FY2010, Maine and Nebraska contributed almost the same number of recruits (411 and 437 respectively). However, Maine's much smaller population means they contributed a larger percentage of their youth to the military, and this is reflected in the recruitment rate of each state. Maine's rate, which is calculated as number of recruits per 1,000 youth aged 18-24, is 3.6, while Nebraska's is 2.4. In order to better illustrate the targeted demographic for enlistment, rates from NPP's previous years of analysis have been adjusted to reflect a candidate pool of 18-24 year old youths instead of the 15-24 standard used previously.

Unfortunately, the military offers no data on recruits' household incomes. However, we do know the median household income of each recruit’s zip code. Using this data we can explore whether recruits tend to come from poor, middle-class, or wealthy zip codes. 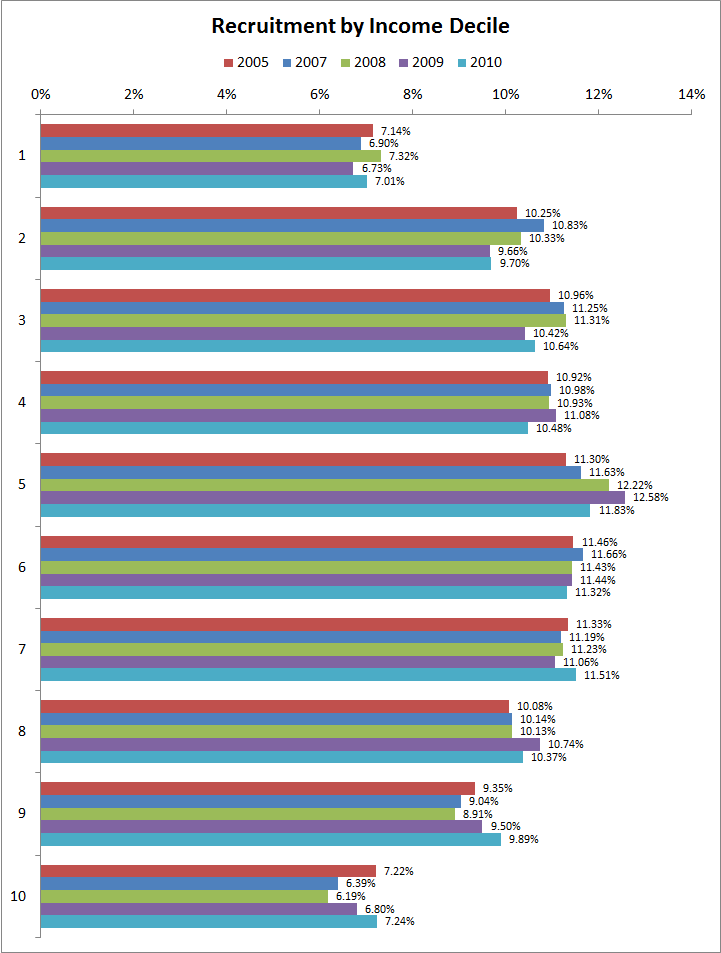 Last year, NPP analyzed the correlation between unemployment rates and recruitment rates across counties and found very little; this pattern repeated again in FY2010. Although the data does not suggest a strong statistical connection between unemployment rates and recruitment rates, other factors lend support to recruiters' assertions that the poor economy is driving candidates to seek out the armed forces as a career choice.

In terms of sheer numbers, the 7,000 recruit jump in active Army accessions between FY2009 and FY2010 speaks to an increased desire to join the Army, but this information is more powerful in context. The Delayed Entry Program (DEP) is a program which allows recruits to sign a contract which guarantees them a specific military occupation specialty and requires them to arrive at basic training by a certain date. When FY2011 recruitment began in October of 2010, the Army had already fulfilled 50 percent of its recruiting goals for the entire year with recruits in the DEP.4 When the Army is able to fulfill not only the current fiscal year's demands but half of the next, it becomes more difficult for individuals to enlist and overall recruit quality rises as the services take their pick of the best qualified.

Another impact of the influx of candidates, and the ability of recruiters to choose from among them, is the rising education requirements. With the achievement of its Tier 1 goal of 90 percent or better, the Army decided in August of 2010 to discontinue its program to help enlistees earn their GED high school equivalency certificates as part of their training.5

In April 2011 the Army announced that it was lowering the maximum enlistment age from 42 back to 35 (it raised it to 42 in 2006).6 While this did not impact recruiting in FY2010, it is another reflection of the increase in numbers of better qualified recruits.

Not every recruit joined because they were unable to find a job in the civilian sector. What is known, however, is that in FY2010 there was an increase in the number of applications, and the applicants were better qualified than in the past.