President Obama today released his fiscal 2014 budget proposal and emphasized his deficit reduction plans. Paired with deficit reduction already enacted, the president would reduce deficits by more than $4 trillion over 10 years with a 2.25-to-1 ratio of spending cuts to new tax revenue. Notably, he became the first democratic president ever to propose reductions in Social Security benefits by endorsing an alternate measure of inflation – known as chained CPI – to shrink cost-of-living adjustments for retirees. Nearly 90 percent of Americans oppose cuts to Social Security.

The president also set a record for lateness, delivering his budget two months after the legal deadline of the first Monday in February. Here are highlights of what the new budget contains:

President Obama proposed a total of $3.8 trillion in new spending in fiscal 2014, an inflation-adjusted reduction of around 1 percent relative to 2013. The budget includes $166 billion over 10 years for infrastructure repairs and other job creation measures. It also proposes universal access to prekindergarten education, which would be funded by new taxes on tobacco products. Boosting job growth and expanding education funding are initiatives that enjoy strong support among the American public, according to opinion polls.

The president proposes repealing the automatic cuts of sequestration and instead pursuing other deficit-reduction measures, meaning that discretionary spending – both military and domestic – would receive fewer cuts than if sequestration remained in place in 2014. The budget would reduce agriculture subsidies and prevent individuals from receiving unemployment and disability payments simultaneously, among other cuts. The use of chained CPI in Social Security and elsewhere in the budget would reduce deficits by $230 billion over a decade. And the budget includes $392 billion in savings from Medicare and other health programs, in part by raising Medicare premiums for wealthy retirees and negotiating for lower prescription drug prices. The budget maintains the expansion of Medicaid under Obamacare, a move supported by 52 percent of Americans, according to opinion polling. 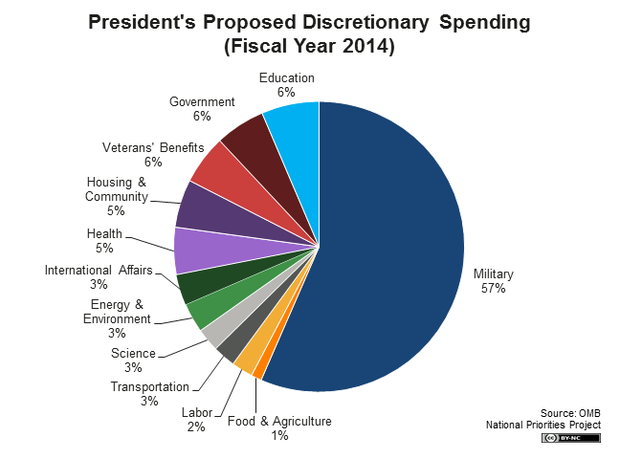 And here's the president's proposed allocation of $3.8 trillion in total new spending in fiscal 2014: 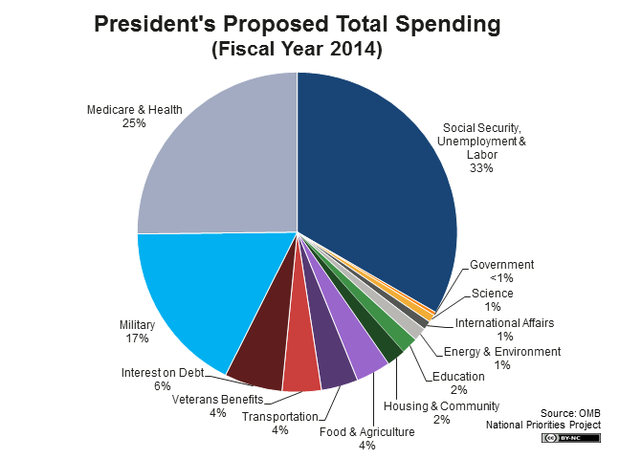 The president projects $3 trillion in tax revenue in fiscal 2014, an increase of 12 percent relative to 2013. This is in part the result of a stronger economy and in part a result of changes to the tax code. The budget proposes limiting tax deductions and loopholes for the top 2 percent of income earners and includes a “Buffett rule” to require that millionaires pay a tax rate of at least 30 percent; together these tax increases would raise $580 billion over 10 years. Around two-thirds of Americans support higher taxes on the wealthiest earners. The budget also would make permanent tax credits targeted to low-income and middle-class families, including the American Opportunity Tax Credit, the Earned Income Tax Credit, and the Child Tax Credit.

The president does not propose raising new tax revenue from corporations, though such a move would be supported by around 64 percent of Americans. The president’s budget proposes closing some corporate tax loopholes and simultaneously lowering corporate tax rates, a move that would not result in any new taxes on corporations.

Here's where $3 trillion in federal tax revenue would come from in fiscal 2014: 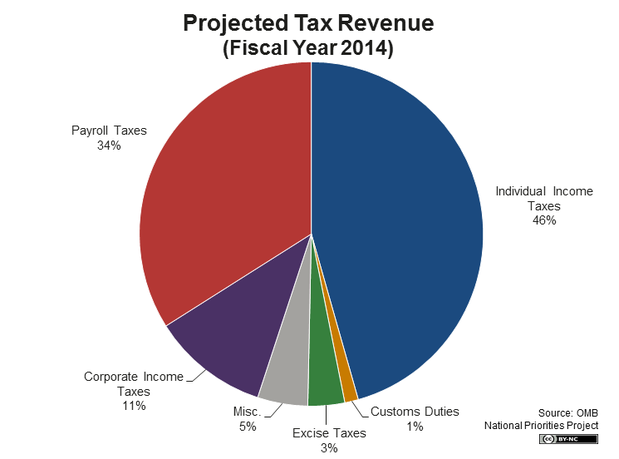 The budget includes $526.6 billion for the Department of Defense base budget, a figure that does not include war costs or nuclear weapon activities at the Department of Energy. That represents a 1.6 percent cut relative to current levels, and includes $8.4 billion for the purchase of 29 F-35 Joint Strike Fighters. The new budget does not specify funding levels for operations in Afghanistan in 2014. Fifty-eight percent of Americans would support substantial reductions in military spending, according to polls.