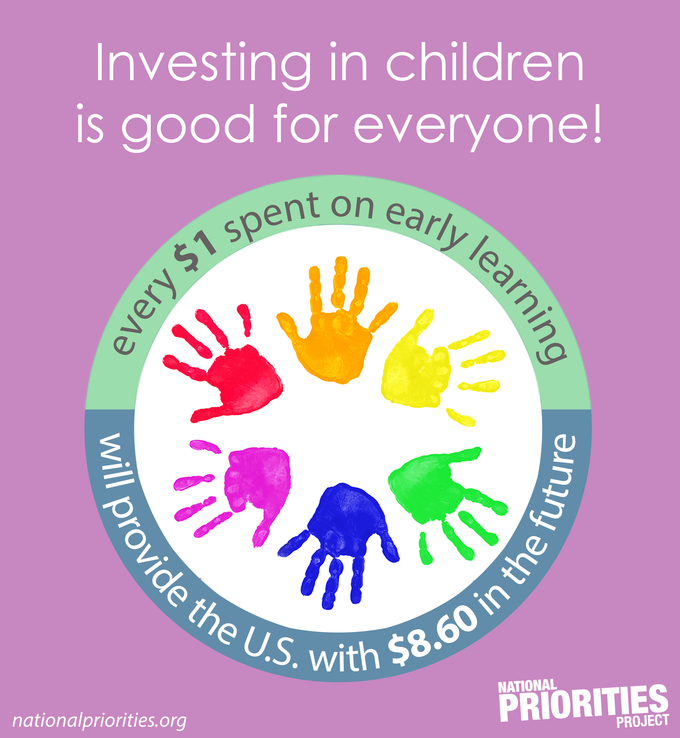 Child care costs for a 4-year-old range from $344 per month in rural South Carolina to $1,472 per month in Washington, D.C.[1] The current lack of affordable child care means fewer options for families to get ahead.

Preschool provides benefits for all children, but is especially important for kids in low-income families. Being poor takes a real toll on kids, but those who attend a quality preschool are more likely to graduate from high school, earn more as adults, and are less likely to become teen parents, serve jail or prison time, or need government assistance like welfare or food stamps.[2] Every kid deserves a good start in life.

Getting these results requires high quality preschool programs. That means well-educated, well-paid teachers and thoughtful, comprehensive programs that support the whole child. It’s not cheap. But it’s worth it, and we can afford it. It’s time to get serious about what families need in the 21st century: it’s time for us to recognize that preschool is essential for our kids, our families, and our economy.

How does the federal government support early childhood education?

How much does the federal government invest in early education?

To put that in context, in 2014, our federal government spent $628 billion on the Pentagon and related costs, including $19 billion for nuclear weapons and related costs: more than twice as much as we invested in Head Start. 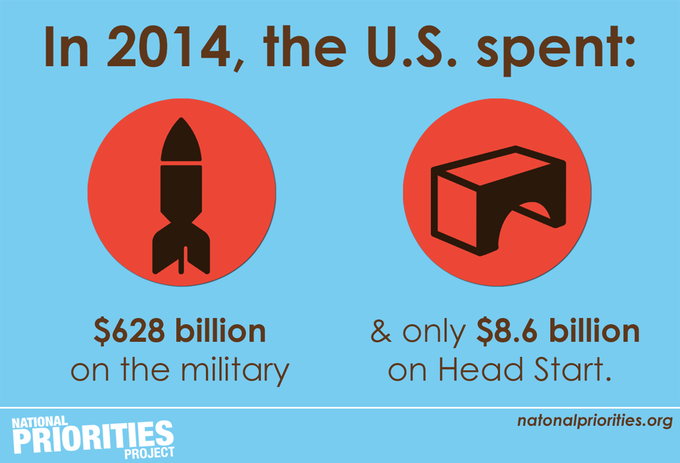 Focus on Head Start: Who benefits?

Head Start is the biggest federal early childhood education program. Compared to the whole population, children in Head Start are more likely to be Latino or African American, to speak Spanish at home, to have a disability, or to experience homelessness.

What are the economic benefits of early education?

Early learning provides society with a return on investment of $8.60 for every $1 spent.  About half of that benefit comes from kids who attend preschool earning higher incomes as adults.[8]

Are there proposals to invest more in early childhood education?

Can we afford it?

The president’s proposal would pay for expanded public preschool by increasing taxes on tobacco. There are other possibilities, too: cutting unnecessary Pentagon spending by 2% could more than double Head Start funding. Or, if taxpayers with incomes of more than $500,000 paid between 0.1% and 1.4% more in income tax (with the highest increases for incomes above $10 million), we could cover the cost of the president’s Preschool for All proposal.[10]

[7] U.S. Department of Education. A Matter of Equity: Preschool in America.