The Souls of Poor Folk: A Preliminary Report 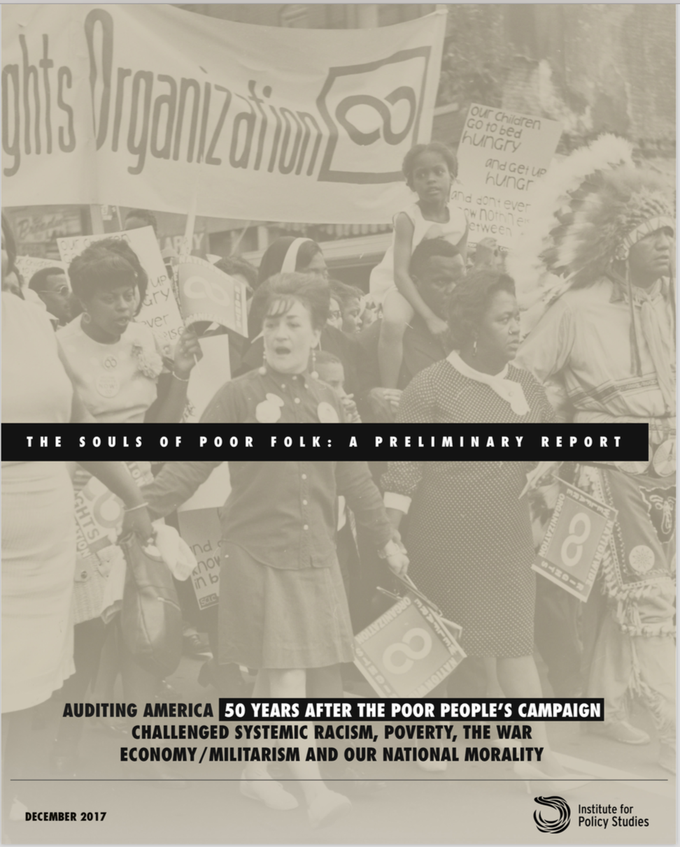 In 1968, the Rev. Dr. Martin Luther King Jr. and other civil rights leaders launched a Poor People’s Campaign to organize towards transformative actions to end poverty, racism, and militarism in America.

While this effort was undercut by King’s assassination, two prominent faith leaders — the Rev. Liz Theoharis and the Rev. Dr. William J. Barber II — are launching a new multi-issue, multi-racial Poor People’s Campaign to recapture the spirit of that 1968 campaign.

To support this modern-day Poor People’s Campaign, the Institute for Policy Studies has produced an analysis of the campaign’s four core issues: racism, poverty, the war economy/militarism, and ecological destruction. The report finds that by many measures, these problems are worse today than they were five decades ago.

For example, the report documents the increased number of Americans below the poverty line; the acceleration of economic inequality; the emergence of new forms of voter suppression laws and mass incarceration that further entrench systemic racism in America; the growing imbalance in federal discretionary spending on the military relative to social programs; and the intensification of racial and income disparities in access to clean air and water and exposure to environmental hazards.

This report is a preliminary analysis for release at the launch of the new Poor People’s Campaign on December 4, 2017. A more in-depth “audit” of these issues, including testimonials from many of the leading activists and thinkers of the past 50 years, will be released in 2018.