National Priorities Project at the Institute for Policy Studies with Kairos Center for Religions, Rights and Social Justice; The Poor People's Campaign; and Repairers of the Breach.

How have the 140 million poor and low-income people in the U.S. fared during the global coronavirus pandemic? 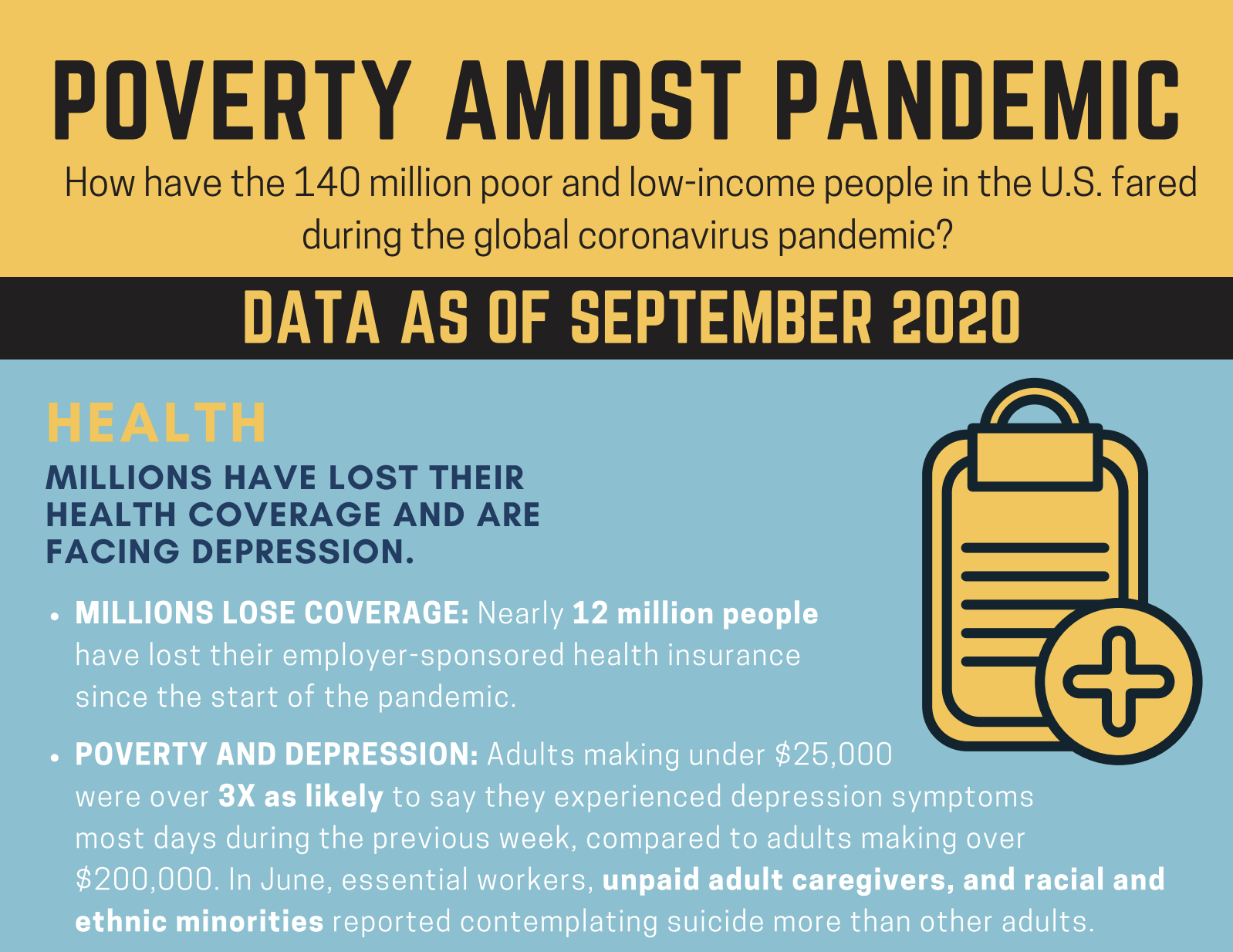 Recently, the Census Bureau released its official measure of poverty for 2019, which was covered in various news outlets. Yet there is very little hard data on the experience of poverty during the historic economic upheaval of the last six months.

Prior to the pandemic, the United States was a country where some had vast wealth, while more than 40 percent of people struggled or failed to make ends meet. Since its beginning, the Poor People’s Campaign has concerned itself not just with those who meet the official federal poverty standard, but with those who are either living in poverty or just one disaster away from falling into it, according to the Census Bureau’s Supplemental Poverty Measure (SPM). In 2017, 140 million people in the United States were living in poverty or on the verge of poverty using this measure.

Unlike the Official Poverty Measure (OPM), the SPM accounts for costs of living including housing, utilities, and clothing; it accounts for sources of non-cash government aid such as food stamps; and it varies by geography to account for variations in costs of living around the country. These differences make it a more realistic measure of peoples’ lived experiences. The measure put the poverty income for a two-adult, two-child family of renters at $27,005 in 2017. An income below $54,010 (twice the poverty level) would have been considered low-income for the same family.

With everything changed since 2019, and official poverty measures for 2020 still far in the future, we asked: what has become of the 140 million during the pandemic?

Our analysis draws from multiple sources, but two of the central sources are among the few to provide up-to-date information during the pandemic: the Current Population Survey, which is conducted monthly by the Census Bureau and Bureau of Labor Statistics, and the Household Pulse Survey, a joint project by the Census Bureau and multiple federal agencies that specifically asks about experiences during the pandemic. We looked at people with family incomes below $50,000, the cut-off closest to the four-person family income threshold for poor and low-income people according to the SPM.

From Josh Bivens and Ben Zipperer of the Economic Policy Institute, “Health insurance and the Covid-19 shock,” August 26, 2020. The estimate reflects the number of people likely to have lost employer-provided health insurance as a result of employment losses.

From the Centers for Disease Control, “Mental Health, Substance Use, and Suicidal Ideation During the COVID-19 Pandemic,” August 14, 2020.

According to the Bureau of Labor Statistics, “[t]he total number of people claiming benefits in all programs for the week ending August 22 was 29,605,064, an increase of 380,379 from the previous week. There were 1,591,456 persons claiming benefits in all programs in the comparable week in 2019.” This means that in the week ending August 22, there were more than 18 times as many people receiving unemployment benefits compared to the comparable week in 2019. This only includes those who qualified for unemployment benefits, and excludes undocumented people, people who worked for cash, and many people who have lost some but not all of their work hours or income.

According to the Bureau of Labor Statistics as of the September 9, 2020 job openings release. Chart accessed September 23, 2020 from https://www.bls.gov/charts/job-openings-and-labor-turnover/unemp-per-job-opening.htm.

According to the author’s analysis of data from the August 2020 and August 2019 Current Population Survey, the main source of timely employment data for the country and the source of the official unemployment rate.[1] Incomes are for the prior 12 months, which means they may be affected by the pandemic. But, at least through August, it does not appear likely that people are appearing in lower income groups as a result of higher unemployment during the pandemic. An analysis of the same data showed fewer people in lower-income groups in August of 2020 than prior to the pandemic, suggesting that incomes for some increased even while unemployment soared, likely thanks to federal stimulus and unemployment aid. This suggests that people in the low-income groups in August of 2020 were likely to have had low incomes before the pandemic, as well. These people were likely to have been among the original 140 million identified by the Poor People’s Campaign in 2017. 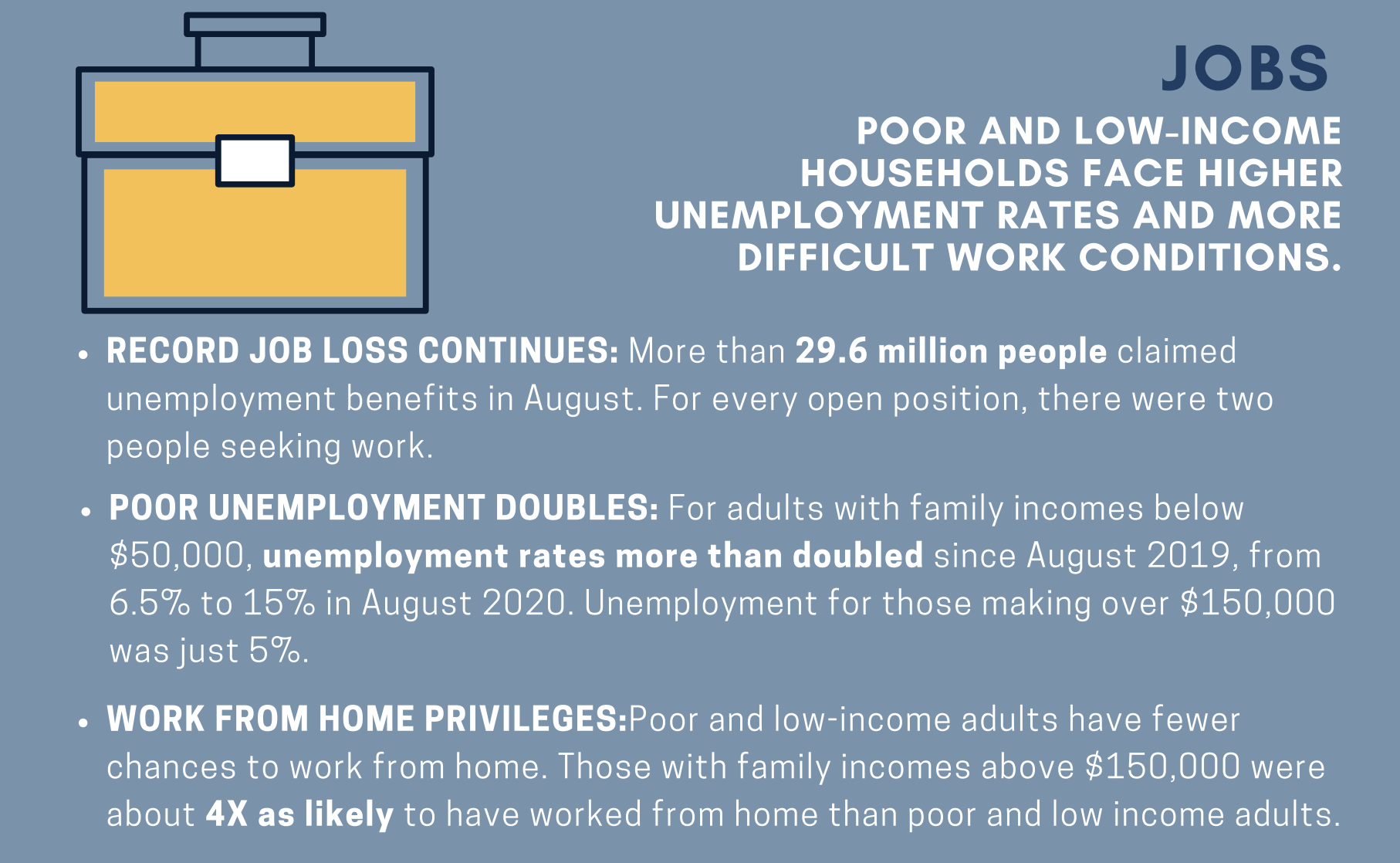 According to the most recent data from the U.S. Department of Agriculture. 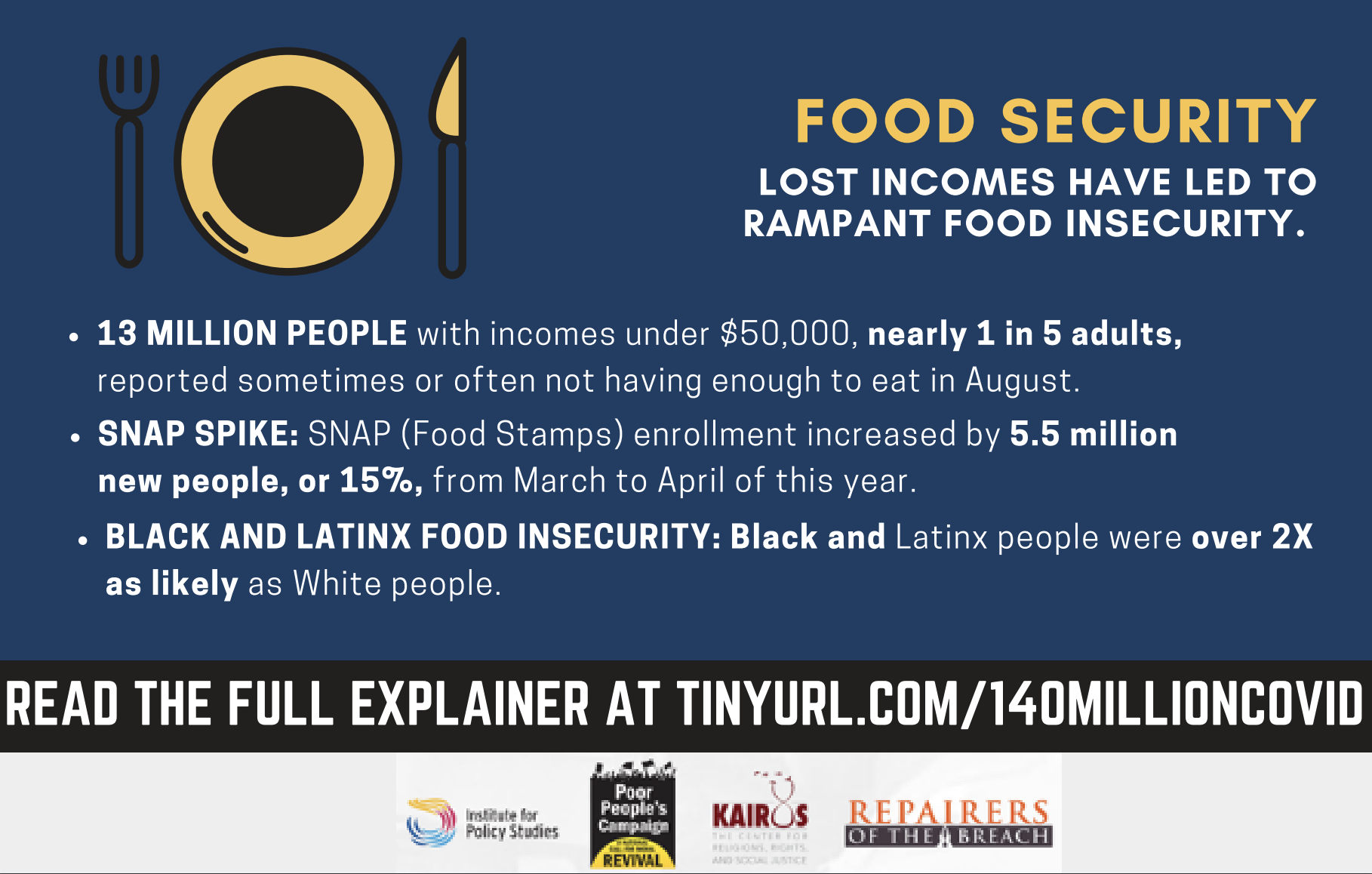 These data points reveal the multiple crises that the 140 million are currently facing: higher rates of unemployment and job insecurity, lack of adequate health care, housing and food insecurity, and greater emotional and mental distress. These crises are impacting poor and low-income Black, Latinx and Native / Indigenous people and women at higher rates, reflecting the devastating impact of systemic racism in jobs and health, housing and food policy.

The Poor People’s Jubilee Platform offers systemic and structural policy prescriptions that can address the injustices of systemic racism, poverty, ecological devastation and militarism that have made the poor and low-income more vulnerable to the pandemic and ensuing economic impacts. Moving the abundant resources of this country to secure health care, guaranteed incomes, living wages, housing and more for the 140 million will not only provide the health and economic security we need now, it will heal this country from decades and generations of violence against the poor.

Everybody has a right to live - and thrive - in this country.