30 Years of Taking Back the Federal Budget 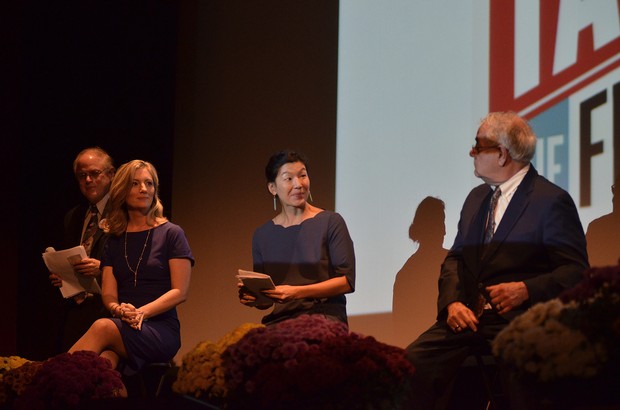 National Priorities Project turned 30 this year and on Friday, October 18 we kicked up our heels in celebration.

Allies from across the nation joined NPP’s New England neighbors at the historic Academy of Music located in the heart of our hometown, Northampton, MA, for an event titled Be the Change: Take Back the Federal Budget!

There are so many wonderful moments from the evening, it is hard to select just a few to highlight here. Our incredible speakers, Ai-Jen Poo (National Domestic Workers Alliance) and Kristin Rowe-Finkbeiner (MomsRising), joined Barney Frank and Congressman Jim McGovern in a spirited discussion focused on the most pressing federal budget issues on our horizon. Soulful musical performers lifted our spirits and 140 young musicians rocked the house!

We had had the privilege of celebrating 30 Democracy Champions – bold and tenacious leaders working in sectors such as voter engagement, environmental justice, labor, student mobilization and beyond.

Another esteemed guest in the audience was 18 year old Alia Holness, a democracy champion in her own right. NPP’s team first met Alia three years ago in Washington, DC. She was among the first young filmmakers in the nation to enter and win the If I Had a Trillion Dollars National Youth Film Festival. As such, she traveled to the Capitol to screen her film in the House and Senate and meet with lawmakers and Hill staff. Alia tells her story in a short video. You can view it here.

As we honor our organization’s legacy and look ahead to another 30 years, National Priorities Project’s staff and board are inspired by Alia, the tireless efforts of our 2013 Democracy Champions, and all the community members who joined us in celebration last Friday. Together, we are fulfilling the promise of our great nation.

Can Worries for Head Start Stop? »