What is the Budget Deficit? 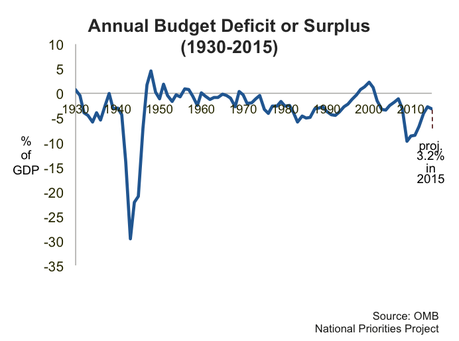 The federal debt, or national debt, is the sum of all past years' deficits. Every year that the federal government runs a deficit, that amount is added to the federal debt. In the event of a surplus, the extra money is used to pay down the existing debt. As of February 11, 2015, federal debt stood at $18.1 trillion. [3]

Most budget proposals, including the president's and those from various groups in Congress, feature deficit reduction through either decreased spending or increased revenues, or both. For instance, the president's proposed fiscal year 2016 budget would run a deficit of $474 billion in fiscal 2016, [4] with plans to achieve $1.8 trillion in total deficit reduction over 10 years. Budget resolutions passed by the House and Senate for fiscal year 2016 would reduce deficits to zero through extensive spending cuts and no planned revenue increases.

The debt ceiling is the legal limit set by Congress on the total amount that the U.S. Treasury can borrow. If the level of federal debt hits the debt ceiling, the government cannot borrow additional funds, which could lead to sudden interruptions in government services. Congress has the legal authority to raise the debt ceiling as needed. From 1940 through spring of 2015, Congress has raised, suspended, or otherwise changed the debt limit 114 times.[5] Raising the debt limit does not authorize new spending, but allows the Treasury to pay the bills for spending that has already been authorized by Congress.

A recent Pew Research poll found that deficits have fallen somewhat as a priority among Americans. In January 2013, 72 percent of poll respondents said deficit reduction was a top priority; two years later, that had fallen to 64 percent.[6] As for how to reduce budget deficits, a solid majority of Americans support  raising taxes on both the wealthy and corporations.[7]

More on Debt and Deficit