Social insurance is made up of programs that help workers and their families replace income lost due to unemployment, disability, retirement, or death, as well as ensure access to adequate health care. Every year, millions of Americans rely on programs like Social Security, unemployment insurance and Medicare. These programs will touch nearly all Americans during their lifetimes, as most people draw Social Security when they retire or rely on government-funded medical care in old age. In 2015, the U.S. will spend $900.5 billion on Social Security and $38.8 billion on unemployment insurance.[1]

Social insurance and earned benefits are funded through mandatory spending. Unlike discretionary spending that is determined with the annual approval of Congress, mandatory spending is controlled through eligibility requirements and benefit levels specified in existing authorizing legislation. This makes benefits much more reliable (and expenditures more predictable) than if they were subject to annual appropriations decisions by Congress.

Social Security Is Not Going Broke 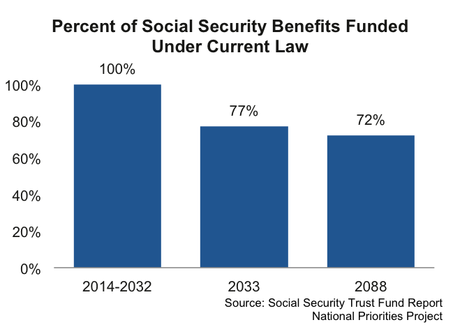 The president’s budget proposal supports a transfer of funds from Social Security’s retirement program to its disability insurance program to ensure the continued viability of the disability benefits program until further changes can be made in Congress. This contradicts a rule proposed by House lawmakers in January that would prevent such transfers. Reallocating funds from one trust fund to another, which Congress has done 11 times in the past, has historically been a non-controversial measure that prevents cuts to Social Security benefits. The President’s proposal would also close loopholes that allow some high-income individuals to avoid Medicare and Social Security payroll taxes, which could provide the program with as much as $10 billion more per year by the end of the decade.

Americans think Social Security and the economy should be top priorities for the federal government in the next year.[6] More than 8 in 10 Americans don’t mind paying Social Security taxes, and many would be willing to raise payroll taxes and make income over the earnings cap taxable in order to ensure the program is on sound financial footing.[7] Currently, Social Security tax applies only to an individual’s first $118,500 in wage income.