Americans have a right to know how their federal tax dollars are being spent. In every state, a complex network of federal employees and federal contractors and grantees provide vital services that ensure clean drinking water, education, security, and more. By understanding spending for each of these, Americans can better understand the priorities in the federal budget – but we can only understand what we can clearly see.

In 1983, the U.S. government began publishing a complete report of federal spending in every state, county, and congressional district. In 2012, it stopped.

Shortly after President Obama took office, he issued a memo promising an “unprecedented level of openness in Government.” Since then, federal agencies have been busy publishing data. USASpending.gov is now the website designed to show the public how their federal tax dollars are spent each year. But USASpending data has been fraught with omissions and inconsistencies. In addition, the site excludes entire categories of spending entirely, notably federal salaries and benefits.

Historically, agencies that publish government data have pre-packaged it to answer specific questions for a specific audience, which can limit its usefulness to others. Open data differs from the pre-packaged variety because it’s granular – it has a lot of detail – and machine-readable so it’s easily used by computers, making it useful to a wider range of people. For example, instead of our knowledge being limited to the total federal contract dollars received by all businesses in a county, we can now download a record of each individual business and contract. And we can get the information faster, without waiting until the end of a fiscal year.

The trade-off is that more granular, more timely information without all the pre-packaging can be more difficult to understand, because it often doesn’t come with much documentation or the phone number of someone who can explain it. Thus, the role of intermediaries like NPP, who can make meaning of the data, is increasingly important.

Sometimes the numbers we need are available, but only in a format that’s not easily read by computers, making them hard to analyze. Another part of our work is to unlock these data and contribute them back to the community. An example is historic tax break estimates from the Office of Management and Budget. We turned 40 years of PDFs into an open source, machine-readable dataset that allows us to track the cost of tax breaks over time.

Despite the tremendous amount of federal data that’s been released in the last few years, there’s much work to be done. Citizens have a right to know what the government has chosen not to publish, and they have a right to assume that government-published data are accurate.

Existing data is so piecemeal that it can be impossible to assemble the big picture of federal spending. For example, it’s usually impossible to match spending records back to specific government programs and the legislation that authorized them.

In 2014, President Obama signed the Digital Accountability and Transparency Act (DATA Act) into law. This legislation requires that agencies and recipients of federal money follow standardized reporting procedures. It also stipulates that budget appropriations and detailed information about Treasury accounts be added to USASpending.

The goal is that the public will have greater insight into how the federal budget translates to spending on specific federal programs.

One of the biggest concerns about USASpending is the accuracy of the data it holds. Unfortunately, the DATA Act does not mandate improvements for the grant and contract data already in USASpending, and it doesn’t require that any of the new data be localized. In other words, it doesn’t replace the federal spending data by state, county, and congressional district that the government used to provide in the CFFR. 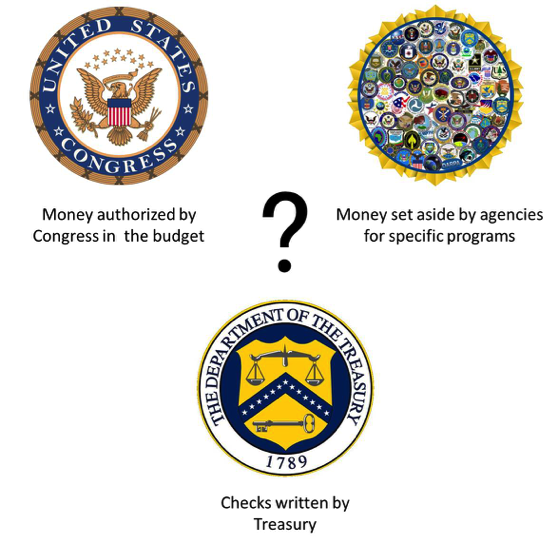 Regardless, the DATA Act is an important step toward transparency, but its successful implementation will be challenging. With many of the milestones years away, we’ll need leadership from the agencies and commitment from the next administration to ensure its success.

More about Transparency and Data