The Democrats’ Cautious Return to the War on Poverty 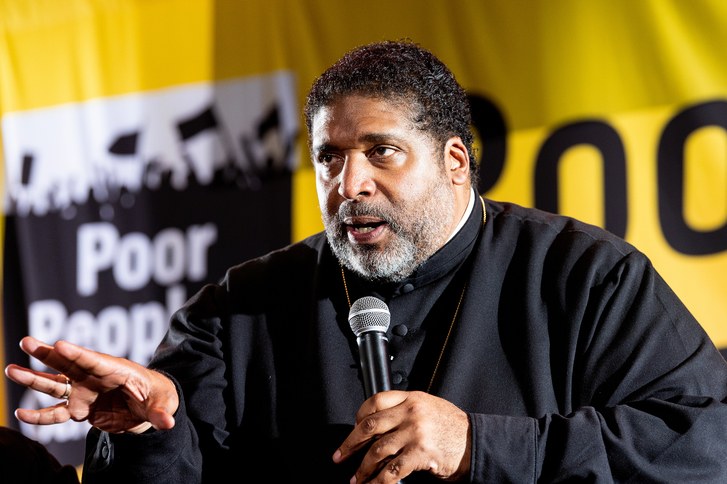 The Reverend Dr. William Barber, who from 2005 to 2017 was the president of the North Carolina N.A.A.C.P., is perhaps the most high-profile civil-rights activist in America today. He came to prominence in 2013, as the leader of the Moral Monday campaign, a series of protests mounted against voter-suppression efforts and other conservative legislation in North Carolina. He is now one of the leaders of the Poor People’s Campaign: A National Call for Moral Revival, a decentralized protest and organizing movement. Barber conceived of the effort as a resurrection of Martin Luther King, Jr.,’s Poor People’s Campaign, of 1968, which occupied King in the last months of his life—an effort to take Johnson’s War on Poverty even further. Jelani Cobb described the two campaigns in a profile of Barber for this magazine, last year. “The Poor People’s Campaign demanded full employment, a guaranteed basic income, and access to capital for small and minority businesses,” he wrote. “This time, the demands include federal and state living-wage laws, equity in education, an end to mass incarceration, a single-payer health-care system, and the protection of the right to vote.”

The original Poor People’s Campaign culminated with the erection of a tent camp on the National Mall, called Resurrection City, that housed several thousand activists and poor Americans hoping that their presence would bring attention to the campaign. With some internal turmoil, the camp persisted for six weeks that wet and muddy spring, before being forced off the Mall by police in late June. On June 17th of this year, Barber’s Poor People’s Campaign also found its way to Washington, where about a thousand activists convened not in a tent camp but in a packed gymnasium at Trinity Washington University, for a forum featuring many of the Democratic Presidential candidates, each eager to impress the progressive activist community and Barber.

Joe Biden, who has drawn fire for his opposition to federally mandated integration by busing during the nineteen-seventies and his support for welfare reform in the nineteen-nineties, was foisted with the unenviable task of speaking first. He was politely received but struggled a bit with the event’s tight time-keeping. At one point, he rushed through a list of policy proposals, some seemingly announced there onstage for the first time. “I think everyone’s entitled to have total health care,” he said. “I propose every single person in the United States has access to Medicaid. Right off the bat. I would triple the amount of money we spend on Title I for underprivileged schools, from fifteen to forty-five billion dollars a year. And I would make sure we have preschool for every three- and four- and five-year-old—every single state in the Union.”

Elizabeth Warren and Bernie Sanders spoke in familiar broad strokes about inequality and touted signature agenda items like universal childcare and Medicare for All, while Kamala Harris sketched out American precarity in detailed figures. “In America today, almost half of American families could not afford a four-hundred-dollar unexpected expense,” she said. “That could be the car breaks down. That could be health bills coming—a four-hundred-dollar unexpected expense will topple the stability of that family. In America today, in ninety-nine per cent of the counties, minimum-wage workers can’t afford a one-bedroom apartment. In America last year, twelve million people took out a loan of, on average, four hundred dollars from a payday lender, with an interest rate often in excess of three hundred per cent. These are the realities of America today.”

Two days later, at a House Budget Committee hearing on poverty featuring Barber and the Poor People’s Campaign co-chair, the Reverend Dr. Liz Theoharis, House Speaker Nancy Pelosi offered a statistic that may have been surprising to those familiar with recent official poverty figures. “America is still a land of stunning injustice,” she said. “Our work is far from done. A hundred and forty million Americans are poor in our country.”

The Census Bureau estimated that there were 39.7 million Americans living below the official poverty line in 2017. But, according to the Poor People’s Campaign and the Institute for Policy Studies, a progressive think tank, when the definition of poverty or deep precarity is expanded to include those whom the Census Bureau counts as “low-income”—those living at below twice the poverty line—and the Supplemental Poverty Measure, which accounts for both the value of government benefits and certain cost of living expenses, the number rises to around a hundred and forty million. By this count, the poor or near poor comprise not the twelve per cent of the population suggested by the official line but nearly forty per cent.

The 2020 Democratic-primary candidates already seem to be thinking bigger about poverty in America, not only appearing at Barber’s forum but also releasing ambitious proposals aimed at addressing poverty more directly than the Democratic Party has in many years. Kamala Harris’s lift Act would bring more than nine million Americans out of poverty through a generous work-tax credit worth six thousand a year for middle- and lower-class married couples. Cory Booker’s homeAct would bring about the same number out of poverty through a tax credit for overburdened renters. Michael Bennet’s American Families Act, co-sponsored by the Ohio Democrat Sherrod Brown, would lift about four million out of poverty via a child allowance worth thousands of dollars per low- or middle-income child. Despite the large potential effects of these ideas, they still reflect the caution that Democrats have taken on anti-poverty policy since the nineteen-eighties, offering credits tied to work or specific expenses like the care of children or housing. Harris’s lift Act features a sleight of sorts in language—its full name is the lift the Middle Class Act, although many of its benefits would go to those struggling to get into the middle class.

The case that the Poor People’s Campaign is making—that policymakers should speak both more specifically and more unapologetically about the plight of the poor—has large implications not just for policy but also for how Americans conceptualize their own status. The campaign’s numbers suggest that many of the seventy per cent of Americans who consider themselves working class should instead consider themselves among the working poor, and that our politicians have an obligation to move from the safety of rhetoric about middle-class uplift to the broader class politics outlined by Barber. “We are here to challenge the greatest myth of our times,” he told activists at the conference. “And that is that extreme policies only hurt a small subset of people. We are here—we will stay here, because, like they used to say in the civil-rights movement, “How much freedom do we want? We want all of it, and we want it now.”