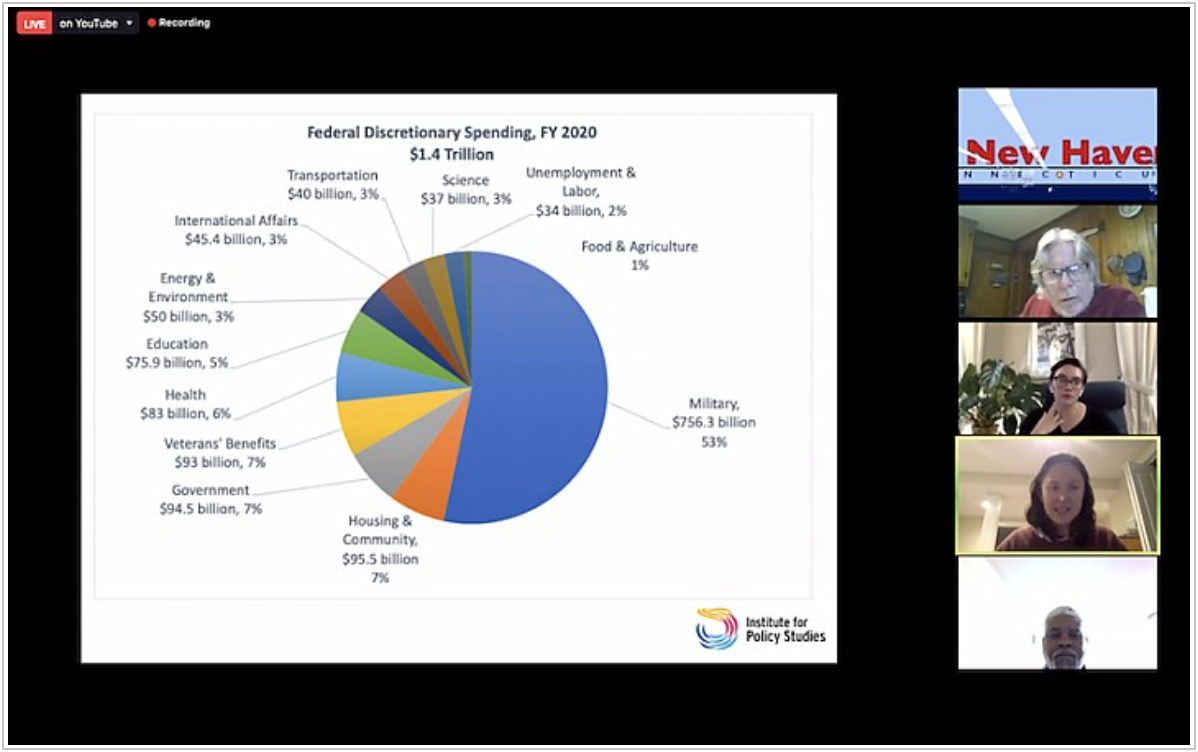 Dozens of New Haveners turned out to a virtual public hearing, invoking two new crises to press lawmakers for support for an older cause.

The Health and Human Services Committee of the New Haven Board of Alders held the hearing Tuesday night. After hearing the testimony, the alders unanimously voted in support of holding a referendum on federal spending priorities. Proposed by from the Peace Commission, the nonbinding referendum calls upon U.S. Congress to reallocate military funding to address city-level priorities, including education, employment, and sustainability.

The two-hour-long hearing, hosted on Zoom and live streamed on YouTube, featured over 30 concerned residents giving testimony in support of the referendum. Their testimonies denounced federal military spending and highlighted important local needs.

In support of cutting military funding, many testimonies drew connections between the referendum and the recent death of George Floyd in Minneapolis police custody, as a reflection of national military and policing funding priorities. Eleazor Lanzot, a representative of New Haven Rising, pointed to Floyd’s murder as an example of a broken system. Floyd’s death was not “a bug in the system,” said Lanzot. “It’s what the system has been built to do.”

Lindsay Koshgarian of the National Priorities Project at the Institute for Policy Studies delivered a presentation analying federal military spending by the “bloated Pentagon.” Koshgarian cited the 53 percent of the federal budget devoted to military spending, and highlighted the lower budgets allocated to health and education as an example of “misplaced priorities.”

Speakers argued that funds now committed to the military could be better spent on local human needs — like dealing with the Covid-19 pandemic. Many described the pandemic as highlighting the importance of investing in public health. Others cited the economic fallout from the virus to argue for increased investment in infrastructure and jobs. Koshgarian cited statistics that military counter-terrorism funding outstripped coronavirus relief funding by a factor of three.

Marcey Jones, from the New Haven People’s Center, tearfully shared that her uncle recently passed away from the virus. She highlighted the impact of the virus on minority communities and advocated for increased funding to address local inequalities and elevate minority voices.

“Adding our voices is a must,” said Jones.

Joelle Fishman, acting chair of the New Haven Peace Commission that authored the referendum, explicitly connected the referendum to systemic inequality caused by the ongoing crises of police brutality and the coronavirus. On a local level, she pointed out economic inequalities between different neighborhoods of New Haven. “We need a new normal that lifts everyone up,” she said.

Several representatives from the New Haven Public Schools decried lack of funding for education in the city, mentioning instances of school teachers buying supplies for students out of pocket.

Representatives from several climate activism groups, including Sunrise New Haven and New Haven Climate Movement, criticized the military as a major source of pollution, and pushed for increased funding for sustainability efforts. They called climate change as an existential threat the military could not address.

Rev. Kelcy G. L. Steele raised concerns about climate change as a “health crisis” requiring increased attention and funding. “It’s dangerous for us to walk into our collective future unprepared,” he said.

Chaz Carmon, who works in the New Haven schools system, characterized the referendum as a step towards “investing in life,” and away from the military, which invests “in safety, but also in death.”

The proposed referendum, which received unanimous support from the committee, will now go to the New Haven Board of Alders for approval. If two thirds of the alders vote yes, the referendum will appear on the Nov. 3 ballot.

See the full article at the New Haven Independent.