The High Price of Police Militarization 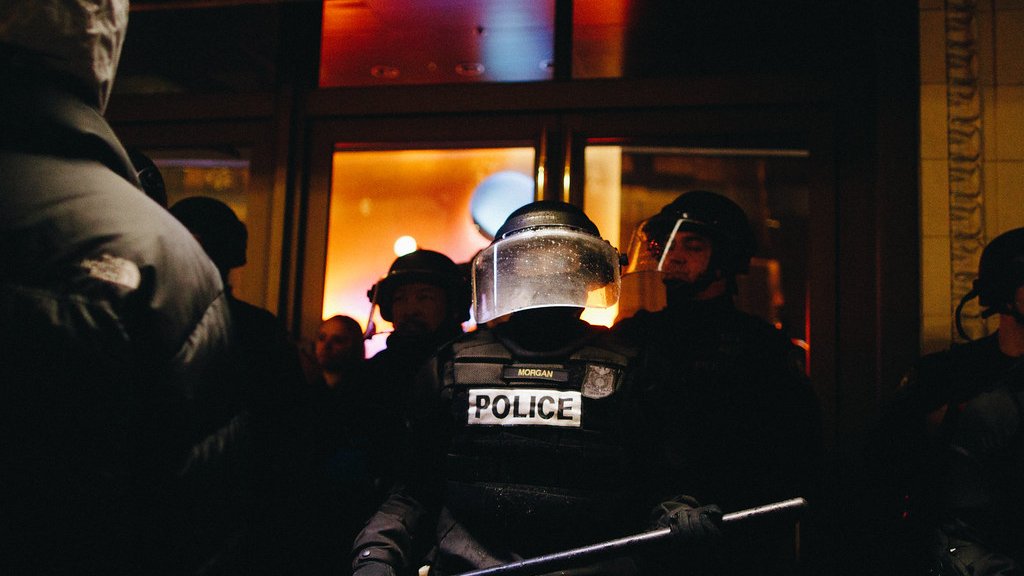 The new study, “The Wars Are Here: How the United States’ Post-9/11 Wars Helped Militarize U.S. Police,” by the Costs of War project, argues that “today’s high level of police militarization is one of the cruel, domestic costs of recent American wars abroad.”

“Police militarization is in a sense as old as U.S. policing itself,” the report’s introduction reads, “yet it has exploded since September 11, 2001, and its intensification must be counted as among the costs of this country’s post-9/11 Wars.”

The study’s author, Jessica Katzenstein, is a Ph.D. candidate in anthropology at Brown University. As she tells The Progressive in an email, this report “frames intensified U.S. police militarization as a cost of the U.S.-led post-9/11 wars, without losing sight of the deep lineage of ‘militarized’ policing in this country.”

“Charting this longer history is key to understanding why the post-9/11 surge of police militarization has mobilized especially against Black, brown, Indigenous, and poor people, and to understanding what ‘demilitarizing’ the police could mean,” Katzenstein says. “By tracing the continuity of anti-Black and colonial violence, and by taking a broad view of ‘militarization,’ the report argues that militarization is inseparable from U.S. policing writ large.”

The Costs of War is a project of the Watson Institute International and Public Affairs at Brown University. Comprising multiple scholars, legal experts, physicians, and human rights practitioners, the project has been documenting the “unacknowledged costs of the post-9/11 wars in Afghanistan, Iraq, and elsewhere” since launching in 2010.

It has been nineteen years since the attacks of September 11, 2001, and the declaration of the “War on Terror” by President George W. Bush, which paved the way for domestic policing to become inseparable from “homeland security” and “counterterrorism efforts.” This resulted in an upsurge in resources from the federal government to local law enforcement, as well as strengthened alliances between the police, the military, and federal agencies such as The Department of Homeland Security.

“Since the launch of the U.S. post-9/11 wars with the invasion of Afghanistan in October 2001, we have seen successive administrations use counterterrorism as one of the latest justifications for police militarization and dramatic increases in the U.S. military budget,” Costs of War Co-Director Stephanie Savell says in an email.

According to Savell, this escalation of police militarization is not just a byproduct but a cost of the post-9/11 wars, “a result of intentional policy and budgetary choices oriented around fighting potential incidents of terrorism domestically, within the United States.”

Since 2016, the U.S. military budget has increased by 10 percent, from roughly $657 billion in 2016 to more than $740 billion allocated for 2021, National Priorities Project research analyst Ashik Siddique tells The Progressive in an email.

“Forces within and around the Pentagon have been pushing for years for record-high levels of military spending,” Siddique says.

The ties between the military and police long precede 9/11, with the two forces sharing tactics even before subsequent federal programs formalized such exchanges.

In the late 1960s, a time of nationwide protests fighting for civil rights and against U.S. militarism in Southeast Asia, the Law Enforcement Assistance Administration was created as an agency of the U.S. Justice Department. Granting billions of dollars to law enforcement for equipment and weaponry to local and state police, LEAA (1968-1982) was succeeded by the Office of Justice Assistance (1982-1984) and the Office of Justice Programs, which still exists.

The Department of Defense and the Department of Homeland Security have facilitated the militarization of law enforcement through various programs by providing them with funding and military-grade equipment, the most notable being the Law Enforcement Support Office’s 1033 program. Managed by the Defense Logistics Agency Disposition Services (DLA), the program was made possible by the National Defense Authorizations Act of 1990 and 1991.

The 1033 program is named after a provision in the section of the National Defense Authorization Act of 1997, which grants permanent authority to the Secretary of Defense to transfer military surplus equipment and weaponry to federal, state and local law enforcement agencies (bayonets, grenade launchers, tactical vehicles, night-vision goggles, etc.). The DOD has transferred over $7 billion worth of equipment and weaponry to 8,600 law enforcement agencies since 1990. By June 2020, the program had over 8,200 participants in federal, state and local enforcement agencies in forty-nine states and four U.S. territories.

“We support reuse by warfighters first,” DLA Disposition Services director Michael Cannon says. “After that our global inventory is open for review by eligible law enforcement agencies.” This statement raises serious concerns as to why law enforcement would ever need equipment designated for “warfighters.”

As witnessed this year by the mass protests in the wake of George Floyd’s murder in Minneapolis, law enforcement has treated American cities like war zones and protesters and bystanders as enemy combatants. Mine-resistant vehicles rolled across the streets, LRAD Sound Cannons blared, and surveillance aircraft flew over several cities. Protesters, journalists, and bystanders have been arrested and assaulted by police with flash-bang grenades, pepper spray, tear gas, rubber bullets, batons, and other weapons.

The Physicians for Human Rights identified at least 115 protesters across the country who were shot in the head or neck with kinetic impact projectiles (KIPs) from May 26 to July 27, 2020, according to their report “Shot in the Head” published on September 14.

“KIPs include various bullets and baton rounds, as well as tear gas canisters, that are fired into crowds from a gun, rifle, or other launcher,” the PHR report notes.

As emphasized in “The Wars Are Here,” militarized policing has always been a “reality for Black Americans, particularly poor Black people and Black liberation activists,” citing (among numerous others) the MOVE bombing in 1985 , when police dropped a satchel bomb on the compound of a Black liberation group in Philadelphia, Pennsylvania, killing five children, six adults, and wiping out the homes of 250 people.

“I hope to connect the dots between the post-9/11 wars and the history of U.S. policing in a way that helps reframe common tropes in debates about police militarization,” Katzenstein says. “My goal here is to demonstrate how the military equipment on which we often focus is not an issue that can be addressed in isolation from other aspects of post-9/11 militarization, including U.S. state violence against racialized communities overseas.”

“The Wars Are Here” is part of “a series of papers that look comprehensively at the many costs—financial, human, social, political, environmental—of the post-9/11 wars,” Savell says. As part of the series, Costs of War also published the reports “The Growth of the ‘Camo Economy’ and the Commercialization of the Post-9/11 Wars” and “Creating Refugees: Displacement Caused by the United States’ Post-9/11 Wars” this year.

“Decades of over-investment in the military and militarized law enforcement has made our whole society more brittle and less safe, and less prepared for the real threats to our collective well-being,” Siddique says. “If we’re going to deal effectively with the unprecedented combination of crises our society is facing today—pandemic, climate disasters, mass unemployment, and police brutality—we have to massively reallocate resources away from militarism, and toward investing in real security and well-being for all communities.”

Read the full article at The Progressive.