Is The Pentagon's Budget Too Big? 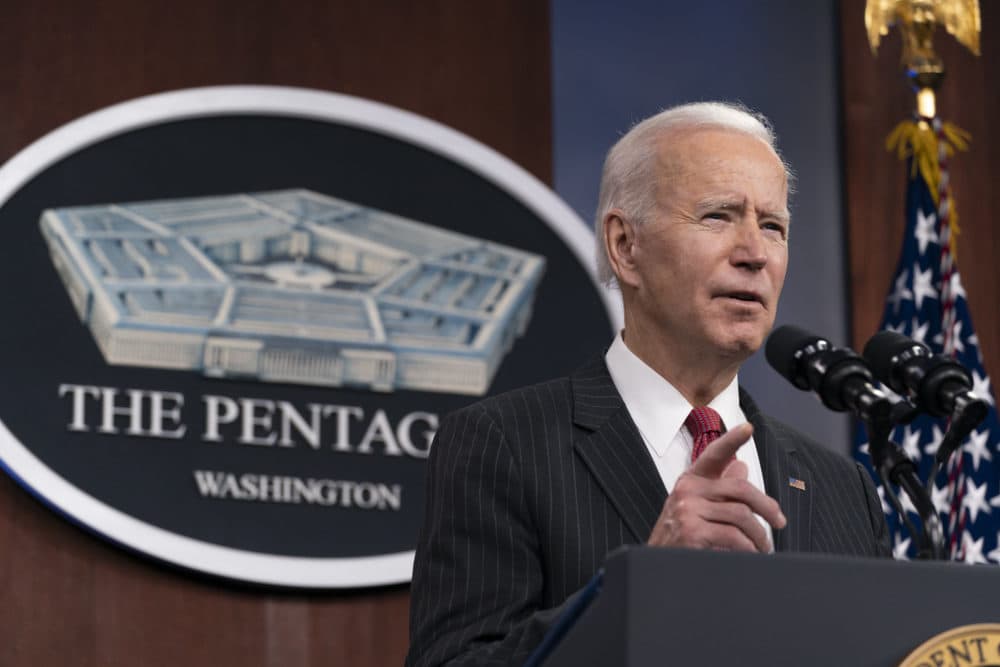 The U.S. defense budget is more than $700 billion dollars. How efficiently are those dollars being spent?

Congress keeps appropriating more to the Pentagon. But some lawmakers say it's time for a different approach.

"The dollars that go to the Pentagon should address our security, not just private defense contractors," Rep. Mark Pocan says. "Things like pandemics, for addressing climate change, cybersecurity.”

Today, On Point: Is the Pentagon's budget too big?

Lindsay Koshgarian, program director of the National Priorities Project at the Institute for Policy Studies. (@lindsaykosh)

Is the Pentagon's budget too big?

Lindsay Koshgarian: "It's far too big. ... I think one of the best comparison points we have at this time is the fact that, as you pointed out in your introduction, the Pentagon budget currently at its current size over the next 10 years, it would be twice the amount, more than twice the amount of the Biden Build Back Better plan, which is priced at $3.5 trillion over 10 years. And which is a matter of tremendous disagreement in Congress.

"And you have Senator Joe Manchin saying it costs too much, and it's very questionable whether it'll get through. But this $750 billion in one year military budget, on the other hand, is going to have no problem, most likely getting through Congress this year."

How much bigger is the Pentagon's budget now than it was before 2001?

Lindsay Koshgarian: “The Pentagon budget today is almost twice as high as it was in the late 90s. So it's a huge difference. You could cut about $350 billion and get back to where we were previous to 9/11. But it's also huge if you look even back further than that.

A lawmaker's perspective on shrinking the Pentagon budget

Rep. Mark Pocan: "We don't need that much to secure this nation. That many more nuclear weapons doesn't provide additional security. That many more private contractors, that many more weapons. We don't even have a real audit of the Defense Department and how they spend their money. And if you look at just the F-35 is one example. There's over 800 deficiencies marked by defense on the F-35. And in the last year, in the last calendar year, they addressed two of those deficiencies. But we keep pouring money into that system.

"And this is the problem. Is they have no accountability, they have no audits, and they're spending money in ways that I don't think actually lead to our security. ... What we need to do is have the right amount of dollars invested in things like the traditional definition of defense. But then let's look at other things that really would provide a better posture for this country.

"And let's put more efforts into diplomacy. At the end of the day, I think America does its best when we do our diplomatic efforts. Look, we're coming out of 20 years later in Afghanistan. I think it's hard to call that a success. But I think certainly we do have successes when you share things like vaccines with the rest of the planet."

On why there are no audits of the Pentagon

Rep. Mark Pocan: "Everything in government — and I've been in local, state and federal government — we audit and look at very carefully to make sure that taxpayer dollars are spent effectively. We don't do this with the Pentagon. In fact, Barbara Lee for years, was trying to get a real audit. And all we ever get are excuses from the White House, the Department of Defense, why they can't do it. Well, that's absolutely B.S. I mean, you can.

"Like any other area you can have accounting for what happens. But they don't. So billions and billions of dollars get spent on things. And yet we don't have that ability. Also there all kinds of cost overruns with defense contractors. There are actual violations we've seen by defense contractors that we continue to give money to. There really is a modernization that has to happen when we deal with defense."

Reflections on the future of the Pentagon's budget

Ret. Col. Lawrence Wilkerson: "We have one ghastly threat, I call it, which we confront, and that's pandemics. We've had more people die in this country from COVID-19 than we had in all our wars in the 20th and 21st centuries. And then we have other things. We have the cyber business, what I call systems warfare. We have economic aggrandizement that the base road initiative of China, for example, could represent. We don't know yet, but it could be that.

"And then we have terrorists with a global capability. All the money we're spending, with very little exception these days, is on legacy systems, systems like the Ford-class aircraft carrier, systems like the F-35. No matter how modern it is supposed to be, we're spending on threats of the past and we're neglecting spending on threats that either face us right now at this moment, or are looming in the future."

Ret. Col. Lawrence Wilkerson: "I've been involved in studies that show clearly — and I'm a military professional — clearly that we could cut $100 billion a year or $1 trillion over a decade, but I don't see it happening. Here's what I see happening. I see one of these crises, possibly the climate crisis, becoming so profound that more people die in New York basements, more people die in Louisiana. More people are needed to fight fires, more people are needed to fight floods. And this crisis deepens to the point where the military is brought in. And then and only then will we change, reshape and make it pertinent to our future."