Budget by Crisis? We Must Demand Better

Sequestration, a looming government shutdown, no President's budget proposal for 2014, the debt ceiling... these crises are failures of Congress to fulfill its responsibility to our nation. We must demand a better federal budget.

We're threatened with the expiration of a debt ceiling suspension in May.

And at the same time, we may be embarking on a broken FY 2014 budget process.

Join us in demanding more from our elected officials in Washington D.C.! Take Action Now .

What we're asking for is not a lot. In fact, all it requires is lawmakers to do their jobs.
1. Repeal Sequestration: Slash and burn budgeting fails our democracy
This widely unpopular legislation was never meant to happen - and for good reason. Approximately $85 billion in automatic, across-the-board federal spending cuts in fiscal year 2013 will affect nearly every American over the next months and years.
2. Pass a 2013 Budget: Governing without a budget is irresponsible
Our federal government has been operating without a formal budget since Oct. 1, 2012. The continuing resolution only serves as a stop-gap measure to continue funding at 2012 levels. This means our nation is in a time warp.
3. Give us an accountable 2014 budget process: Our democracy and people deserve it
Our federal budgeting process is broken. Americans deserve a transparent and accountable budget process - the level of dysfunction we've seen in recent years flies in the face of government by and for the people. See our analysis of 2014 budget proposals from the House, Senate, and Congressional Progressive Caucus.
4. Avoid expiration of the debt ceiling: We don't need another crisis
Failure to raise the debt ceiling would cost the government many billions of dollars in higher borrowing costs and would trigger a government shutdown. We need to raise the debt ceiling limit beyond the May 18 expiration to ensure continued operation of our government.

Since Oct. 1 the government has been running on a stop-gap spending measure called a continuing resolution (CR), which basically maintains status quo funding levels from 2012. The current CR expires on March 27, which means that the federal government will shutdown on March 28 unless Congress passes new legislation to continue to fund its operations. Cogress is currently considering a new CR that will fund the government through Sept. 30, 2013.

You've likely heard news in recent days about the release of the Paul Ryan budget, plus budgets put out by the Senate Budget Committee and the Congressional Progressive Caucus. Those budgets are proposals for fiscal year 2014 – which starts Oct. 1, 2013. In other words, Congress has begun the 2014 budget process even though the fiscal 2013 budget is still up in the air.

As of March 1, nearly every American will begin to feel the impact of sequestration – approximately $85 billion in automatic, across-the-board federal spending cuts in fiscal year 2013 focused almost exclusively on discretionary spending. What does it mean for you?

Take Action with our #BetterBudget campaign!

We deserve a budget that reflects the voices of the people.

Join us to Demand a #BetterBudget from Congress and the President. We're using social media to spread awareness and action so that our legislators hear our voices and listen to our nation's priorities for the federal budget.
We must make our voices heard.  Join the Demand a Better Budget campaign ! 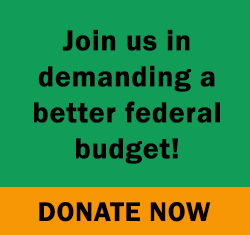 Find the Twitter handle  for people who represent you in Washington.
Use one of these tweets or write your own to Demand a #BetterBudget!