Americans rightly expect certain things of our government: clean, safe drinking water and air, an education system that works, and a system that allows anyone to succeed.

But those priorities aren’t always what we see if we look at our federal budget. Too often, we see a budget that benefits special interests at the expense of ordinary people. And more than half of discretionary spending is reserved for the Pentagon, war, and related costs. What’s more: about half of Pentagon spending has been captured by for-profit contractors. Meanwhile, proposals that would benefit Americans, like free community college, receive little or no consideration by our current Congress.

President Obama’s final budget proposal calls for increased investment in education, the fight against climate change, and family-friendly tax policies, all of which enjoy broad popular support. However, it also calls for continued windfalls for the Pentagon that will benefit for-profit contractors without adding to our security.

Here are highlights of what the new budget proposal contains:

The president’s proposal calls for $4.2 trillion in federal government spending in 2017, representing a four percent increase over 2016 total spending. Of that, $1.15 trillion is for the discretionary spending budget that Congress legislates each year, and nearly $2.8 billion would be for mandatory spending authorized by existing law.

Compared to 2016, discretionary spending would decrease in every category except veterans’ benefits and labor – including education, science and international affairs. Mandatory spending would increase by more than five percent over 2016, with the biggest increases in Social Security, transportation, and Medicare. 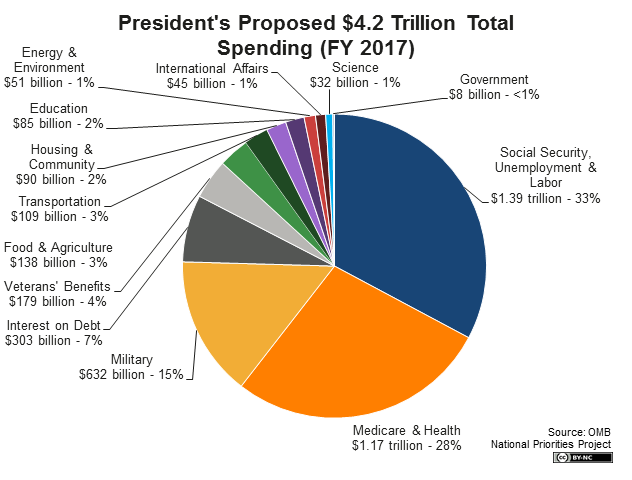 Of the discretionary spending total, $622.6 billion, or 54 percent, would be set aside for the Pentagon, nuclear weapons and related items. The next biggest category of discretionary spending would be veterans’ benefits, receiving an additional $75.4 billion. These two categories total nearly 61 percent of the total discretionary budget. The remaining 39 percent would fund education, housing and community programs, science, the environment, and more. 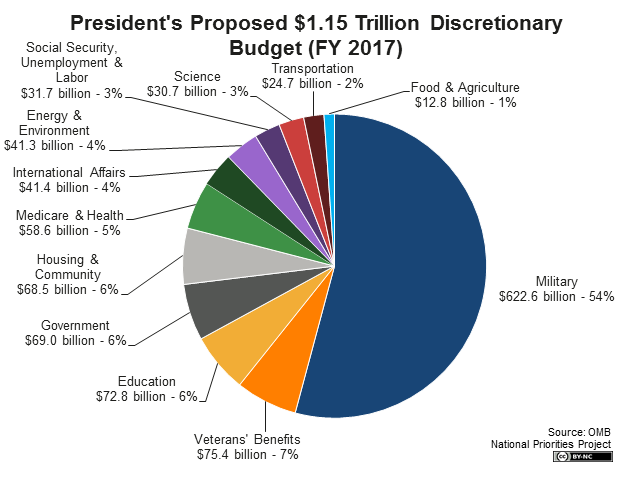 The budget includes proposals that would explicitly create economic opportunity, or help to ameliorate the effects of growing inequality, including:

A strong education system is a clear prerequisite to a fair economy with equal opportunity for all. Americans consistently say that more investment in education is among their top priorities for our government.

The president’s budget proposal includes a number of targeted proposals for increasing education funding, including:

The budget proposes to double clean energy research and development to a level of $12.8 billion by 2021.

The proposed $32 billion per year to improve our nation’s transportation systems is also intended as a climate change measure, and would include investments such as:

The budget maintains the status quo, with more than half of discretionary funding (the funding Congress allocates each year during its budget process) reserved for the Pentagon and spending on nuclear weapons and related items. Total Pentagon and related spending in the request amounts to nearly $623 billion, including the Pentagon budget, nuclear weapons and aid to foreign militaries. The budget provides $583 billion for the Pentagon alone in 2017, a $2 billion increase over 2016.

The Pentagon budget is more than ten times the budget allocated for diplomacy under the Department of State, which is $52.7 billion in 2017. There are often effective alternatives to war, but we too often do not employ them. Compared to $7.5 billion for military efforts against ISIS, the budget provides just $4 billion for dedicated diplomacy and humanitarian relief around the region.

Meanwhile, in addition to the $583 billion Pentagon budget, the president’s request includes:

The president’s budget proposes reforms to modernize the Unemployment Insurance (UI) program so that more workers are covered and for longer periods of time.

As in 2016, the president’s 2017 proposal would close loopholes that allow some high-income individuals to avoid Medicare and Social Security payroll taxes, which could provide as much as $10 billion more in revenue per year by the end of the decade.

The budget also proposes certain reforms to the Medicare program that would extend the solvency of Medicare Part A - the Hospital Insurance trust fund - by an additional 15 years. The program is currently fully funded until 2030. The president’s plan would lower prescription drug costs under Medicare Part D and introduce a co-payment for beneficiaries who receive home health care services, among other reforms.

The president’s budget proposal projects $3.6 trillion in total tax revenue in fiscal year 2017, and includes proposals that focus on raising additional revenue and increasing fairness and transparency in the tax system. Many of these would be very popular among Americans, who believe the wealthy and corporations don’t pay enough in taxes. 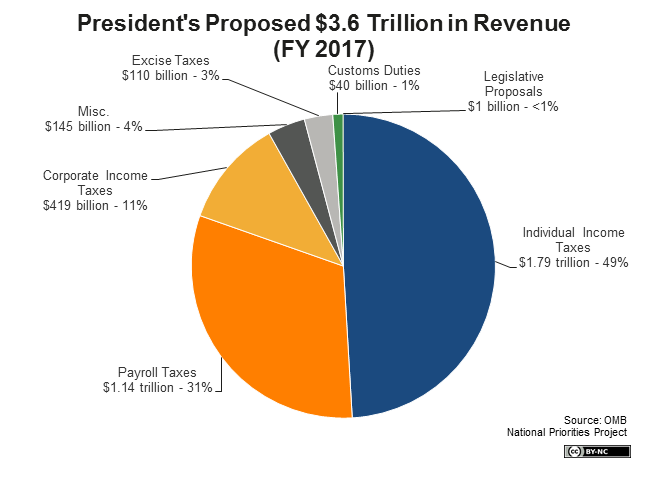 The proposal would raise $955 billion over ten years by closing certain loopholes for wealthy taxpayers. For example, it would:

These reforms would make taxation on the wealthy more in line with the taxation of income earned by lower- and middle-income Americans.

The plan wouldn’t only raise more revenue. It would also use the tax code to combat economic inequality directly, by building upon improvements made to the Earned Income Tax Credit (EITC) under the American Recovery and Reinvestment Act (ARRA) to expand EITC benefits for childless workers. It would increase the size of the credit and provide the credit to more workers based on income and age.