The United States is the single biggest military spender in the world. This report takes note of that fact, and ties U.S. military spending – which is primarily focused on current and potential conflicts abroad – to its analog here at home: spending on veterans of foreign wars, incarceration, immigration enforcement, and the war on drugs.

In 2019, the militarized budget amounted to 64.5 percent of discretionary spending.

U.S. military spending, traditionally defined, was $730 billion in 2019. Studies that seek to define a “national security” budget – which includes the military, and also veterans’ affairs, homeland security, and similar expenses – can easily arrive at estimates approaching or exceeding $1 trillion per year. That amount approaches the size of the entire U.S. discretionary budget.

This report defines a different, but related, concept: the militarized budget. In recognition that the U.S. maintains both the world’s highest military spending, and one of its highest incarceration rates, the militarized budget includes the traditional military budget, as well as spending on veterans’ affairs, homeland security, incarceration, law enforcement, immigration enforcement, and the still-ongoing war on drugs.

The United States has a military budget that is greater than the next ten countries combined: more than rivals like China and Russia, and more than allies like Saudi Arabia, the United Kingdom, and France. 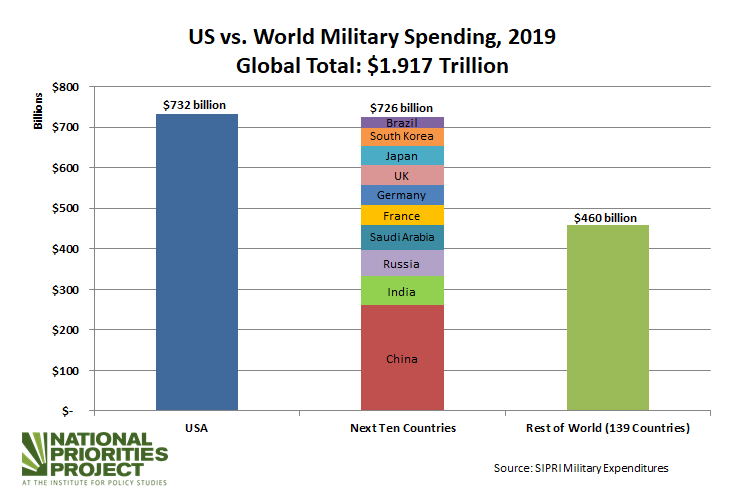 At $730 billion in 2019, military spending accounted for more than 53 percent of the federal discretionary budget – the budget that Congress sets each year during its annual appropriations process.

The biggest category of militarized spending by far was the Department of Defense, accounting for 77 percent of the total, followed by Veterans Affairs.

Nevertheless, the non-traditional segments of the militarized budget added tens of billions in spending. Together, U.S. Customs and Border Protection and U.S. Immigration and Customs Enforcement accounted for $24 billion – more than the budgets for Head Start, the Federal Emergency Management Agency (FEMA) or the Environmental Protection Agency. 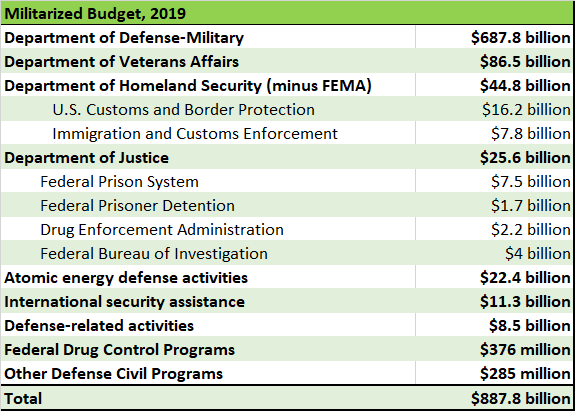 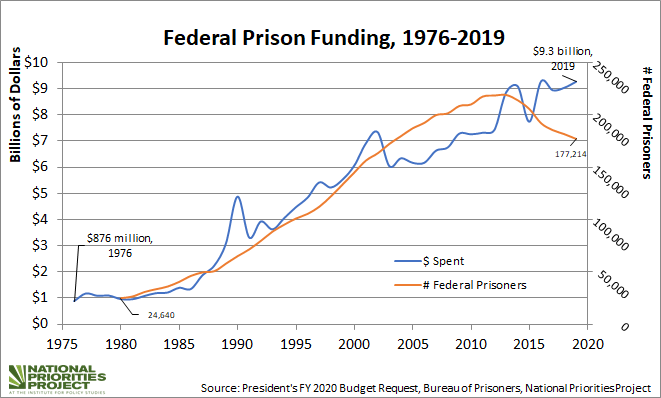 An America where more than 64 percent of our annual discretionary budget is spent on the military, incarceration, immigration and law enforcement may give some Americans pause.

The budget proposals put forth by President Trump would intensify this distribution of resources. President Trump’s proposals include increases in military spending, as well as new spending on border control (including a wall), deportation and removal of undocumented immigrants, and smaller increases for the FBI, drug enforcement, and prison activation and “modernization.”

On the non-militarized side, the president’s proposals call for severe cuts to everything from education to health care and housing.

A recent poll showed that majorities of voters support lower levels of military spending, and reallocating money away from the Pentagon and to domestic needs like health care, education and environmental protection.

At a time when Americans are publicly facing the stark realities of police brutality and normalization of state violence in communities, the United States is overdue for a conversation about the militarization of our federal budget.