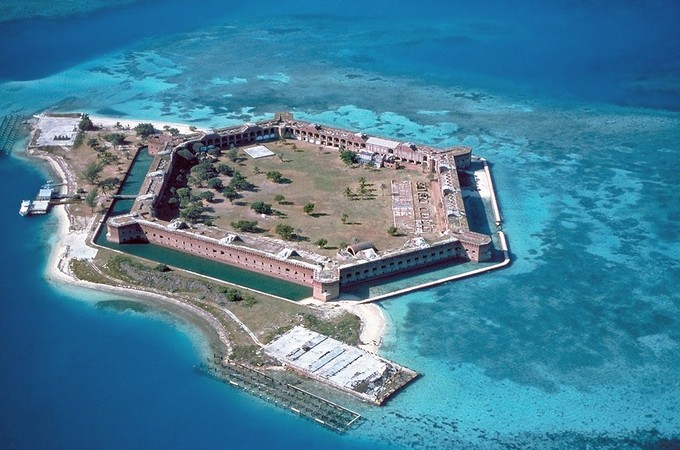 Fort Jefferson in Florida is no longer in use.

Thirty years after the Cold War came to an end, the widely anticipated “peace dividend” never fully materialized, although some military spending cuts were made in the 1990s.  The time has come for an end to the United States ill-conceived wars in Iraq and Afghanistan, and the moment is ripe for a new peace dividend. Today’s threats are mostly non-military in nature: climate change, global economic inequality, and rising nationalism all do not have military solutions.

Reimagining security in the 21st century requires a reallocation of resources. The current military budget could be cut by as much as $350 billion annually to fund progressive priorities like infrastructure investment, universal health care, a clean energy transition, universal child care and debt-free college.

The vast majority of the $350 billion in identified cuts come from three major ideas to rein in Pentagon spending while making us safer.

The endless wars in Iraq and Afghanistan have claimed an unimaginable 800,000 human lives, and displaced an estimated 21 million more. These wars have failed to achieve any of their stated purposes, and in fact have further destabilized much of the Middle East. Nevertheless, the U.S. continues to spend about $70 billion per year on these wars.

As a result of continued military intervention in Iraq and Afghanistan, the United States is on the hook for $6.4 billion and counting. That amount would have been more than enough to fully transition the U.S. electric grid to renewable sources.

The U.S. operates 800 bases in 90 countries, ten times more than the rest of the world combined.

These bases are not all necessary for our safety or that of our allies. In fact, they may even make the world more dangerous.

Far from their purported mission of guaranteeing the safety of Europe, U.S. bases in Germany have directly enabled U.S. military intervention in the Middle East and elsewhere by serving as a transit and refueling site for drones and other military aircraft, a way station for U.S. combat troops, and even the home of the relatively new U.S. Africa Command. Since 1980, U.S. bases have been used at least 23 times to launch wars of choice or military interventions in 14 countries.

The very existence of our bases harms local people and undermines democracy. Our establishment of bases in other nations has displaced at least 20 local and indigenous peoples since 1898, granted legitimacy to authoritarian regimes in at least 40 countries, poisoned the air and water, and disregarded democratic processes in host countries. All of this comes at an estimated cost of $150 billion each year.

Bringing the contracts under control will require the reduction or elimination of unnecessary weapons systems, and the curbing of widespread and costly outsourcing of services to the private sector. Eliminating outdated, excessive and ineffective weapons systems could save tens of billions of dollars, and reinvesting that money would create more good jobs while allowing our economy to transition from a war economy to a green economy. Reducing procurement of unnecessary weapons systems could save $34.7 billion each year.

Meanwhile, operations and support costs have increased from $57,400 per active duty service member in 1980 to $152,300 in 2015, adjusted for inflation. Outsourcing of services previously provided by government employees has been one of the drivers of overhead cost inflation, and reliance on fossil fuels is another. Transitioning those services back to government, and reducing fossil fuel consumption that supports the fossil fuel industry, could save an estimated $27 billion each year.

True security will never come from a strong military without adequate investment in good jobs, clean energy, accessible health care and education. Yet the United States has fallen short of its potential in many of these areas while excelling in one: the U.S. ranks first in the world for military spending, but has the fourth highest poverty rate.

Our resources must be put to better use. United States taxpayers will contribute $738 billion to the Pentagon and military in 2020. For every ten percent reduction in that budget, the United States could have created 1.3 million infrastructure jobs, health care for 20 million adults, or full scholarships for 2 million public university students.

It’s time to change our priorities and reinvest destructive and wasteful Pentagon spending in human needs here at home.