In a recent blog my colleague Mattea noted that a February poll by the Hill of likely voters found that the top priority for 45 percent of respondents was "job creation." In close second, with 40 percent, was "cutting spending." Support for cutting government spending is certainly the result of growing concerns about the federal deficit.

As the chart below shows, annual deficits – when the amount of money the government spends exceeds the amount it takes in – are nothing new.  Since 1940 the federal budget has experienced periods of both deficits and surpluses, with deficits becoming the norm in the 1970's and continuing uninterrupted except for a brief period during the Clinton Administration. The main exceptions to this are during World War II, when borrowing to fund the war lead to several years of significant deficits, and the current economic crisis which has resulted in higher demand for government assistance programs – including bailouts of the auto and financial industries – at a time of greatly reduced revenues. 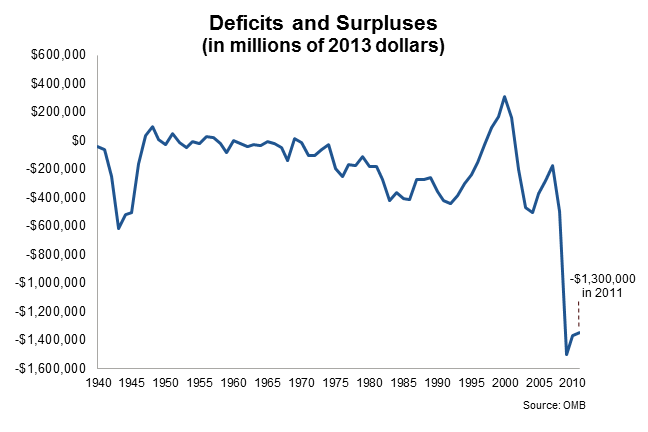 This concern about the federal deficit has been one of the dominant political themes in this election year. And like job creation, cutting the deficit is a central component of the President’s fiscal year 2013 budget request, which projects an FY2013 federal deficit of $901 billion – 32 percent less than the estimated $1.32 trillion deficit in FY2012.

Concerns about the deficit have also had an impact on the budget process itself. Last year the White House and Congress reached an agreement designed to reduce the deficit by $2.4 trillion over ten years. The impact of the Budget Control Act of 2011, which resulted from this agreement, is clearly visible in the president’s proposed FY2013 budget in the form of spending cuts to hundreds of federal programs as well as changes in the tax code and higher taxes on wealthy Americans.

Not all of the President’s proposals will survive the annual budget process in Congress. One thing is certain, however. Concerns about the deficit will be a major driver of this year’s budget debate.

Celebrating the Life and Work of Greg Speeter »