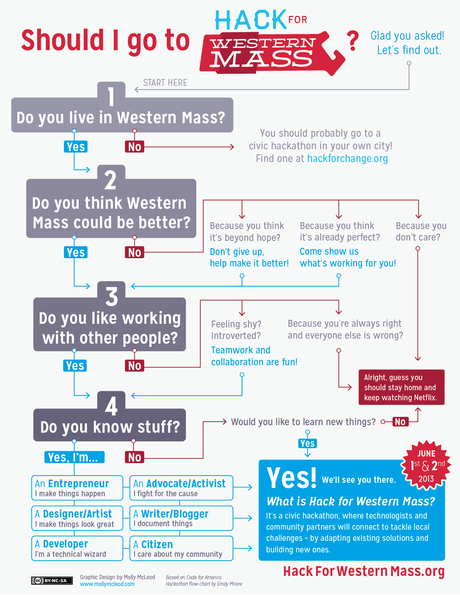 In just over a month, hackers will descend on over 80 locations across the United States, including Amherst, Massachusetts. But don’t worry—these are civic hackers: volunteer technologists, designers, and citizens coming together and using publicly-released data to solve challenges relevant to their towns and states.

In January, President Obama called for a national day of civic hacking. National Priorities Project heard the call and put Western Massachusetts on the map of national and international events taking place on June 1-2, 2013.

NPP is offering up our federal budget data and partnering with a great team of local organizers, local businesses, and the University of Massachusetts to put on Hack for Western Mass, the inaugural civic hackathon in Western Massachusetts.

Civic hackathons have gained significant momentum in cities across the country, resulting in hundreds of projects like websites to match surplus food to those who can distribute it, tools for identifying backers of political ads, and maps of city tree ecosystems.

If you’re a software developer, designer/artist, entrepreneur, advocate/activist, or concerned citizen, we want to see you at Hack for Western Mass at UMass Amherst on June 1-2.

Registration is free, but sign up soon so we can plan accordingly and keep you updated about the local challenges we’ll be working on. For more information or to get in touch with Hack for Western Mass organizers, visit the website at http://hackforwesternmass.org.