That's me with my head inside the Pentagon. Really. 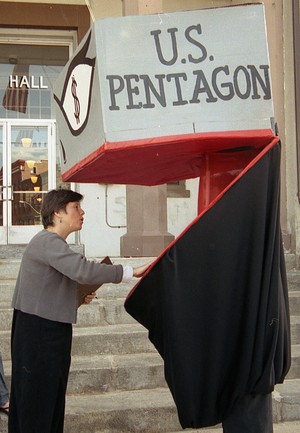 That's me in 2003 with my head inside the Pentagon. Really.

More than eleven years ago, along with dozens of community members, I organized a 24-hour action called Feed the People, Not the Pentagon. It was the first time I used National Priorities Project's numbers to illustrate the profound local impact of federal spending choices.

Crowds gathered for hours. Many participants grappled with our nation's budget choices for the first time, coming to terms with both their right and their responsibility to voice their ideas. None of it would have been possible without National Priorities Project.

NPP's numbers broke down barriers. They showed us how our government spent the tax dollars collected from each city in our region and told us what those dollars could have paid for had they been allocated in keeping with local budget priorities. These facts, combined with people's personal stories, galvanized our bold and sustained action.

That day remains for me the embodiment of the many powerful ways in which NPP transforms individual confusion or outrage into a fierce and strategic democratic movement for change.

Fast-forward to 2008, and I have the unbelievable privilege to follow NPP's visionary founder, Greg Speeter, as Executive Director.

Each day in the six years since, I have seen my own story (sans puppet) mirrored in the experiences of folks across our nation who are using NPP's engaging and timely information and tools to take hold of the federal budget and fight for their priorities.

In recent years NPP has expanded our watchdog capacity. We now have data and tools that illustrate and inspire action around federal budget choices ranging from homeland security to health care to education to taxes and beyond.

As I leave NPP, please join me for one last action together. The day after my 24-hour demonstration, I became a donor to NPP because I saw the on-the-ground power of NPP's work. Will you join me right now with your own meaningful investment to push our work forward?

A few weeks back I received an email from Garlin, a high school sophomore in California. "Hi there," he wrote, "For my history final I'm supposed to 'change the world'. Something that's really important to me has always been the class divide in our country and the prioritization of war spending over education." Garlin went on to ask if he could use NPP's data in a school report and as part of a survey he was conducting in his school. He closed with an exuberant, "Keep on fighting the good fight!"

The past six years have been filled with inspiring stories like Garlin's. I've worked alongside NPP colleagues to leverage our exceptional research and creative outreach strategies that speak to students, community activists, journalists, elected officials, and organizations like MomsRising, Jobs with Justice, NETWORK, the Coalition on Human Needs, USAction, Friends Committee on National Legislation, U.S. Student Association, Roosevelt Campus Network, and countless others. This year, we were nominated for a Nobel Peace Prize in recognition of our groundbreaking work.

Now more than ever, I feel the ground rumbling as more and more people join forces with NPP to take back the federal budget. Americans want solutions to ongoing struggles around education, climate change, health care, and jobs. The federal budget is the crossroads for solutions and NPP is the people's crossing guard.

You make this possible. People like Garlin and partners like MomsRising rely on NPP. In turn, we rely on people like you to keep our amazing and talented team going on a daily basis - churning out the data and tools you need to fight for your priorities. Please show your support now.

Although today is my last day as Executive Director, it's not the end of my partnership with and love for this beautiful organization. I leave with the absolute certainty that NPP has never been stronger. We have an outstanding staff and board, wonderful national partnerships, and a loyal base of supporters and constituents like you -- all of whom have my deepest respect and abiding gratitude.

I am thrilled to see what's next for NPP. Here's a sneak peak at what the team will roll out this summer:

Join me in celebrating the strength and promise of NPP's next chapter! Donate now with a meaningful investment in NPP's work to open the federal budget to Americans' priorities.

I'm confident that NPP's new Executive Director, Doug Hall, is just the person to take NPP to new heights. Doug is wrapping up work at the Economic Policy Institute and will join the team in early June.

I'll remain as a Senior Advisor to NPP as I embark on my own next chapter: I'm returning to my roots as an organizer, taking up a position with MoveOn.org, one of NPP's national partners. Find me any time at jo.comerford@moveon.org.

Like you, I'll continue to turn to NPP - the people's guide to the federal budget - tomorrow and for years to come.

The Ceiling is Raised, and the Real Work Can Begin »