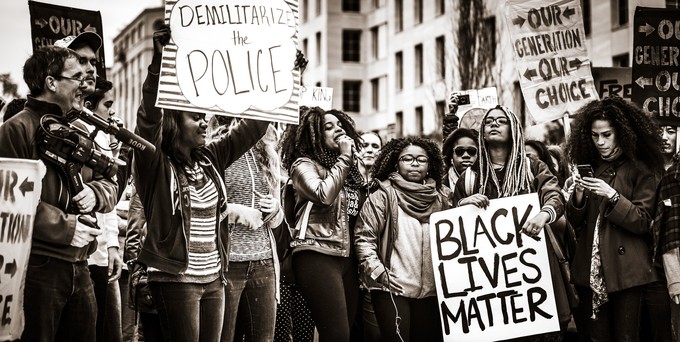 One of the few defining moments of a universally panned presidential debate was the sitting president’s call-out to a violent white supremacist network whose members see him as a hero.

As shocking as this is, it’s part and parcel of a wide-cast policy of violence that is an essential component of reinforcing structural racism and white supremacy. Reports of police killings of Black people seem to multiply by the hour, and justice remains an empty promise. Local law enforcement has access to military grade, Pentagon-provided equipment that underlines an oppressive response when protests surge. Unidentified federal agents and local police indiscriminately seized protesters, bystanders, and journalists from the streets near protest sites. The horror of ICE detention and separation of immigrant families continues, compounded by COVID and reports of forced sterilization that sound pulled from the script for a dystopian TV show – but aren’t.

This is a pattern that continues in our interactions with the rest of the world. Racist immigration policies uphold white supremacy in America. Racist fear-mongering and brash military engagement threaten any chance of collaboration on urgent threats like COVID and climate change with the world’s other emerging superpower, China (while somehow also diverting focus from possible diplomatic pressure tactics to end China’s most horrific policies, including the internment and genocide of the Uighurs.)

There is significant energy and power behind campaigns to defund the police and defund ICE, and growing calls to defund the Pentagon, as well. As awareness of unjust and ineffective violent tactics grow, the flip side can be reinvestment in constructive policies – policies like community investment, alternatives to policing, an immigration policy based on human rights and dignity, and the elevation of diplomacy over war in foreign policy. We can't dismantle white supremacy without dismantling the violent systems that keep it running.