Education spending for elementary, secondary and higher education is projected to account for 6 percent of total federal discretionary spending in fiscal year 2015, a figure that has held roughly constant for decades despite consistent polling that shows education is a top priority for most Americans. 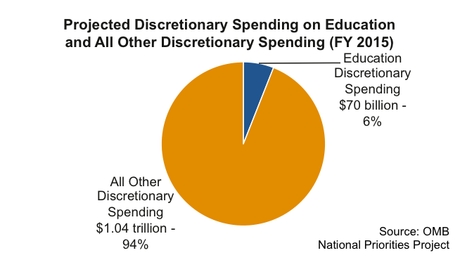 Discretionary spending on education will total $70 billion in 2015. Major education programs funded by the federal government include Title I grants to public schools, Individuals with Disabilities Education Act (IDEA) grants to states, and Pell grants for college tuition.

More than half of all public schools receive Title I funding,[1] budgeted at $14.4 billion in 2015. The 2015 budget also includes $11.5 billion for IDEA grants for students with disabilities.[2] In the 2012-2013 school year, Pell grants for college tuition totaled $35 billion, assisting nearly 10 million low income students through college.[3]

Spending on the Department of Education does not reflect spending on early education programs such as Head Start, which is administered by the Administration for Children and Families as part of the Department of Health and Human Services.[4] In 2015, Head Start will receive $8.6 billion in federal funding. In 2014, Head Start served nearly one million children from birth to age 5 and their families.[5] The Administration for Children and Families’ Child Care Development Block Grant program, which provides grants to states for early child care, will receive $2.4 billion.

The president’s budget proposal for fiscal year 2016 requests $66 billion over 10 years to expand pre-kindergarten education under his Preschool for All Initiative. This initiative would be paid for by raising the cigarette tax from $1.01 per pack to $1.95. The president’s budget proposal also includes $1.5 billion in new funds to expand the existing Head Start program, and makes some key investments in Title I, the program that provides financial assistance to schools that have a high percentage of students from low-income families.[6]

Meanwhile, the maximum federal Pell grant once covered three-quarters of tuition at the average four-year public school; today it covers less than a third. The average grant in the 2013-2014 year was $3,651,[8] and more than half of Pell grant recipients had family incomes under $20,000.[9]

According to polling, 57 percent of Americans are dissatisfied with the quality of public education in the nation[11] and 67 percent say that improving the education system should be a top priority for the president and Congress in 2016.[12]