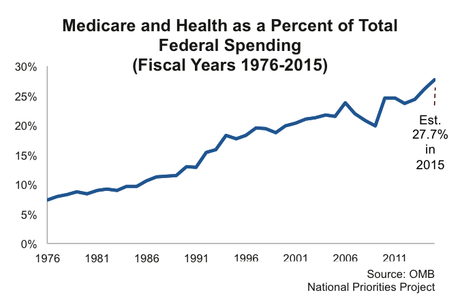 Medicare is the federal health insurance program for more than 52 million elderly and disabled Americans.[3] Medicare alone makes up more than half of all federal spending on health. Medicaid is the federal-state health insurance program that provides health coverage to about 68 million low-income Americans [4], and makes up almost one third of total spending on health. The remaining 14 percent of health spending includes spending on the Children's Health Insurance Program, (CHIP) the federal-state program that serves 8.1 million children in families who do not qualify for Medicaid, as well as spending on programs like the National Institutes of Health and Centers for Disease Control and Prevention.[5] There's also the Affordable Care Act (Obamacare), the health reform law that passed in 2010, which has so far helped more than 9 million Americans get health coverage.[6]

Controlling health care costs is a key challenge facing lawmakers. Republicans in Congress have proposed downsizing Medicaid in order to reduce health spending, while some Democrats have proposed pay-for-performance health care to drive down costs. Meanwhile, initial studies suggest the Affordable Care Act may be slowing the growth of health care costs - one of the law's intended outcomes - though it may be too early to tell.[7]

Medicare Is Not Going Bankrupt

Medicare is funded by general tax revenue as well as a trust fund that workers and employers pay into at a rate of 1.45 percent of payroll income.[8] That trust fund finances Medicare Part A, also known as Hospital Insurance. That part of the program is fully funded until 2030, and will then require some changes to put it on secure financial footing.[9] Meanwhile other components of Medicare - such as Part B, Medical Insurance, and Part D, prescription drug benefits - are funded by general tax revenue.

The president's budget asks wealthy seniors to pay more for their Medicare coverage through higher premiums and would introduce a co-payment for Medicare beneficiaries who receive home health care services. It would also allow the Department of Health and Human Services to negotiate drug prices for Medicare Part D and to secure discounts from pharmaceutical manufacturers.

A majority of Americans name controlling health care costs a top priority (64 percent), but they also strongly value making Medicare sound (61 percent)[10], while only 22 percent supported reducing health spending. [11] Meanwhile, 66 percent of Americans say that the Affordable Care Act should either be maintained as it is or modified slightly rather than repealed and replaced.[12]

For More on Health Care Spending