Our nation’s budget is composed of Federal Funds and Trust Funds. Trust Funds, generated from sources such as payroll taxes, are earmarked for specific programs such as Social Security, Unemployment Compensation and Railroad Retirement. At roughly two-thirds of federal revenues, the Federal Fund aggregates revenues from the following sources: individual federal income taxes, corporate taxes, and others such as estate and gift taxes. [For a further discussion of Trust Funds, see our “Revenues & Borrowing FAQ.”]

You need Javascript enabled to view this chart

As the pie chart above shows, the majority of actual 2010 Federal Fund revenue (as opposed to borrowing) comes from individual federal income taxes. Yet revenue from individual income taxes is down, largely as a result of the recession, dropping by more than 23% between FY2008 and FY2010 (a decrease of $279 billion).

As the line chart below shows, in recent years – even in the midst of the recession – individual federal income taxes have accounted for far more federal fund revenue than corporate taxes. 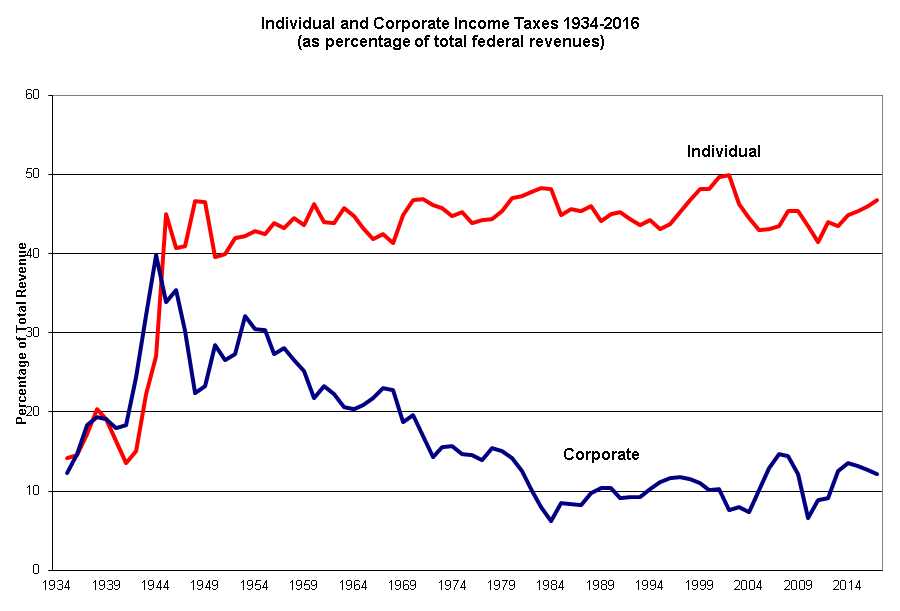 Corporations contributed just 7.5% to the Federal Fund in 2010. Why is this so?

Corporations pay less than the official corporate marginal tax rate: The marginal tax rate for corporations is 35%. However, in 2010 corporations paid, on average, just 23% of their profits in taxes, after deductions, credits and loopholes, according to the U.S. Bureau of Economic Analysis's National Income and Product Account (NIPA), Table 1.12. According to an analysis by the New York Times, of the 500 major companies listed on the Standard & Poor’s stock index, 115 paid a total corporate tax rate — both federal and other — of less than 20% over the last five years, with some paying as little as 1.1%. If all corporations actually paid 35% of their profits in taxes, the government would have brought in an additional $219 billion in 2010.

Corporate tax rates today are lower than they have been historically: As the second line chart below shows, until the 1980s, corporations paid 40% (or more) of their profits in taxes. If corporations still paid that share of profits in taxes, the government would have brought in an additional $309 billion in 2010. 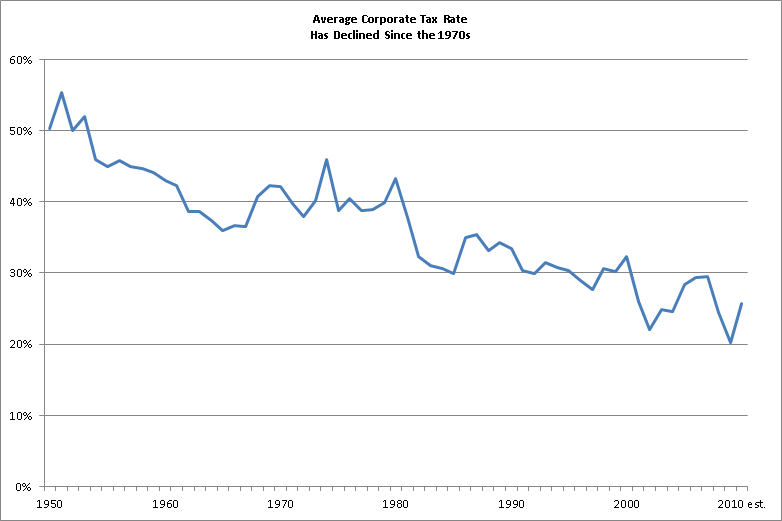 Revenues will increase as the economy recovers, but will do so more quickly if the Bush era tax credits are not extended beyond their FY2012 expiration date. According to estimates by the Congressional Research Service, retaining the Bush tax cuts for the wealthiest 2% of taxpayers (individuals making more than $200,000 or families making more than $250,000) will reduce revenues by $41 billion in FY2012 alone, and by $678 billion through FY2021.