During the 2012 presidential election, many speculated that voters receiving the most assistance from federal programs are the most likely to vote Democratic.

Last week, Alex Klein from Newsweek and The Daily Beast published Why the Republican Party’s Narrative on Income and Voting Failed, an article that uses NPP’s Federal Priorities Database to take a closer look at that claim.

For nearly every U.S. county, he compared Federal Aid to Individuals and voting records from the 2012 race, finding no correlation between the two. 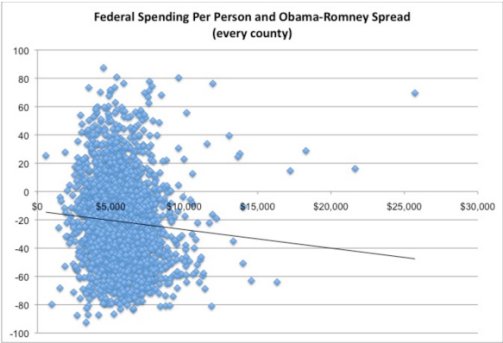 Chart courtesy of Alex Klein and The Daily Beast

So what does this mean? Our Federal Aid to Individuals data represents federal money paid directly to (or on behalf of) individuals. It includes programs like food stamps (SNAP), Social Security insurance, federal retirement and disability programs, Pell Grants, and Medicare. What Mr. Klein found is that people who participate in these programs were not more likely to vote for President Obama in the recent election.

He also found no relationship between wealthy counties and counties that voted for Mitt Romney. It’s an interesting, accessible article and a great example of putting data to work.

To see Federal Aid to Individuals in your state or county, visit the Federal Priorities Database. There are other ways that federal dollars flow to your community, too—see Chris Hellman’s pre-debate piece, Federal Dollars in Your Community. Finally, our Primary Stakes publications from earlier this year look at individual aid but also consider the effect of federal money on state budgets.

« Will There Be a Fiscal Cliff Deal?