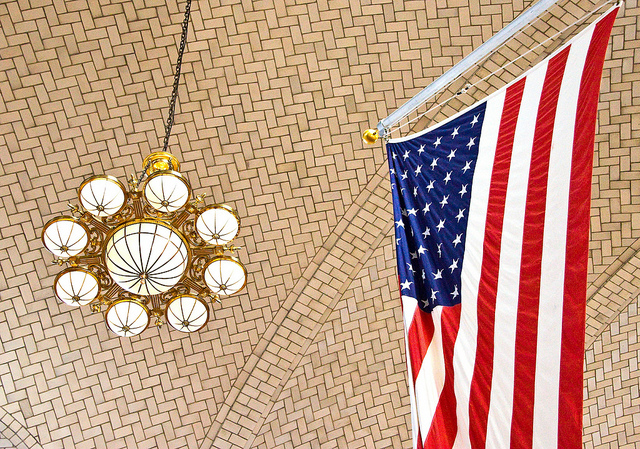 A Ceiling/ Photo by Sheila Sund

You’ve all heard by now that the U.S. will reach its borrowing limit (aka the dreaded debt ceiling) on or around October 17th. While there’s nothing we enjoy more than writing about the debt ceiling over and over again, let’s skip the backstory* and dive into some dangerous debt ceiling myths.

Myth #1: Everyone Knows The Treasury Has Plenty of Money

Treasury Secretary Jack Lew estimates that on Oct. 17, the U.S. Treasury will have about $30 billion on hand. Furthermore, the government will bring in about $222 billion between Oct. 18 and Nov. 15. Indeed, that’s a lot of money.

But here’s the thing: the government will owe about $328 billion during that same time.

Like it or not, Congress has authorized expenses that are greater than our current revenue. If you think this is a bad idea, read up on the budget process and find out how to advocate for less spending or more revenue in future budgets. However, deciding not to pay our current bills is not the solution.

Some have suggested that the U.S. prioritize payments to the people who loan us money. This strategy would keep us from defaulting on our loans and protect the country’s credit rating. After that, we could choose to pay retirees and fund other high-priority programs.

Even if this idea were legal, no one is sure if it’s technically possible. The Treasury computer systems are designed to make payments as they come due. Furthermore, if our Congress can’t even pass a budget, how do we expect them to agree on who gets paid in this scenario? Mark Hopkins, a senior economic analyst at Moody’s likens this strategy to “rearranging the deck chairs on the Titanic.”

Myth #3: The Debt Ceiling is No Big Thing

Actually, because the sequester will last 10 years, we’re a long way from understanding its full impact. And the ripple effects of the shutdown increase each day. It’s hard and not always pleasant, but it’s our responsibility to think about the long-term effects of the decisions we make today:

What's Next for the Debt Ceiling?

YOU can help dispel the myths by calling your representative and demanding that Congress raise the debt ceiling cleanly – without attaching unrelated demands and without another down-to-the-wire showdown. Let’s just say that if 243 million people called, Congress would have no choice but to listen.

*For an easy-to-understand definition of the debt ceiling and a chart of when the U.S. has raised it, see NPP’s Federal Budget 101 - The Debt Ceiling.

« 243 Million Ways to End This Shutdown

No Deal Yet? End the Shutdown and Raise the Debt Ceiling »