Today is the International Day Against Nuclear Tests 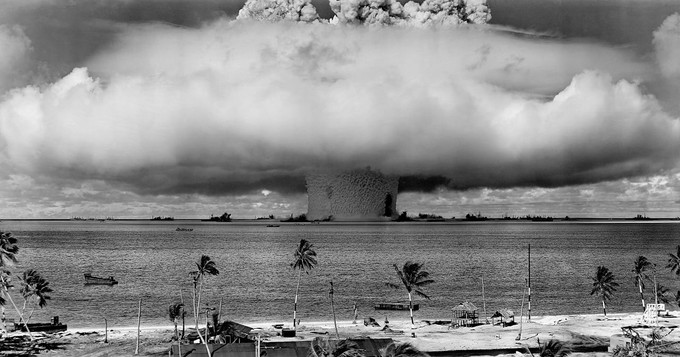 A nuclear test by the United States at Bikini Atoll, Micronesia in 1946. Ships in the vicinity were contaminated by radiation and either sent to the U.S. for decontamination, or sunk. Photo courtesy of Wikimedia.

Blink and you might miss it, especially in these dog days of summer and back to school, but today is the International Day Against Nuclear Tests. Activists around the world are uniting to call for a stop to all nuclear weapons testing. Period.

The day was established by as mainstream an organization as you could think of - the United Nations. But as countries including North Korea continue to develop and test nuclear weapons, the day's goal is ambitious.

The use of nuclear weapons is clearly horrific, and the United States remains the only country to have used nuclear weopons against human targets in war. But the testing of nuclear weapons is dangerous, too. The International Campaign to Abolish Nuclear Weapons estimates that 2.4 million people worldwide will eventually die from cancers as a result of nuclear weapons testing conducted from 1945-1980 (warning: graphic content at link).

While the U.S. apparently has no intention to begin testing live nuclear weapons again, it continues to test nuclear "duds" and develop new nuclear weapons. As long as the U.S. portrays itself as willing to use nuclear weapons in war, it sets a bad example for countries that have ongoing or planned nuclear tests.