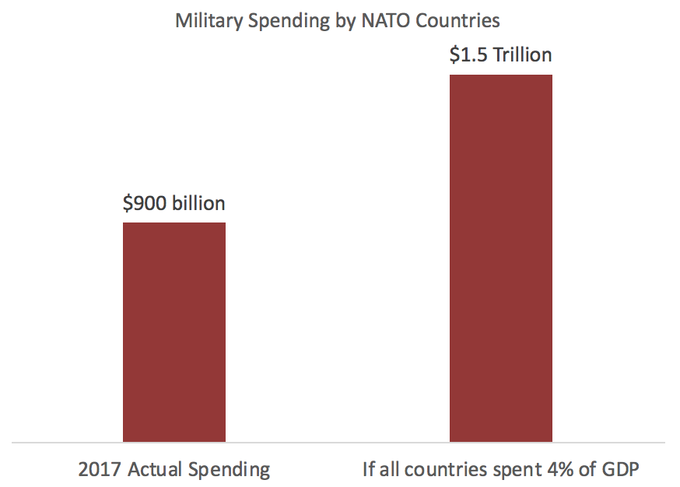 At the NATO summit, President Trump first scolded the United States' allies for not spending as much as NATO guidelines suggest on their militaries - now at two percent of each country's GDP (a measure of the size of a country's economy). Then he suggested double or nothing: every NATO allied country, he said, should in fact spend four percent of their GDP on their military.

This is an astounding suggestion. For one thing, the president proposed no justification for this level of spending. What real threat could be better addressed by spending so much more? (Hint: he may not have an answer for this one). U.S. military spending alone is less than four percent of our GDP, and amounts to more than twice the military budgets of China and Russia, combined. If spending more makes us safer, we should have achieved that many billions of dollars ago.

Second, the level of spending he suggests is leaps and bounds above what any country currently spends. The U.S. itself is spending $700 billion this year on its military - more than half of the trillion dollar budget Congress passes each year, and more than the peak spending during the Korean and Vietnam wars. All told, raising NATO military spending to four percent of each member country's GDP would raise total NATO military spending from roughly $900 billion today to $1.5 trillion - a nearly 70 percent increase, and a near equivalent to adding a new, U.S.-sized superpower to the world scene.

Trump's proposal isn't likely to become a NATO rule, but it may have the effect of driving adherence to the two percent spending rule - which also makes no sense.

Today is the International Day Against Nuclear Tests »