The COVID Deal is a Welcome Stopgap. Congressional Progressives Aim for Much More in 2021. 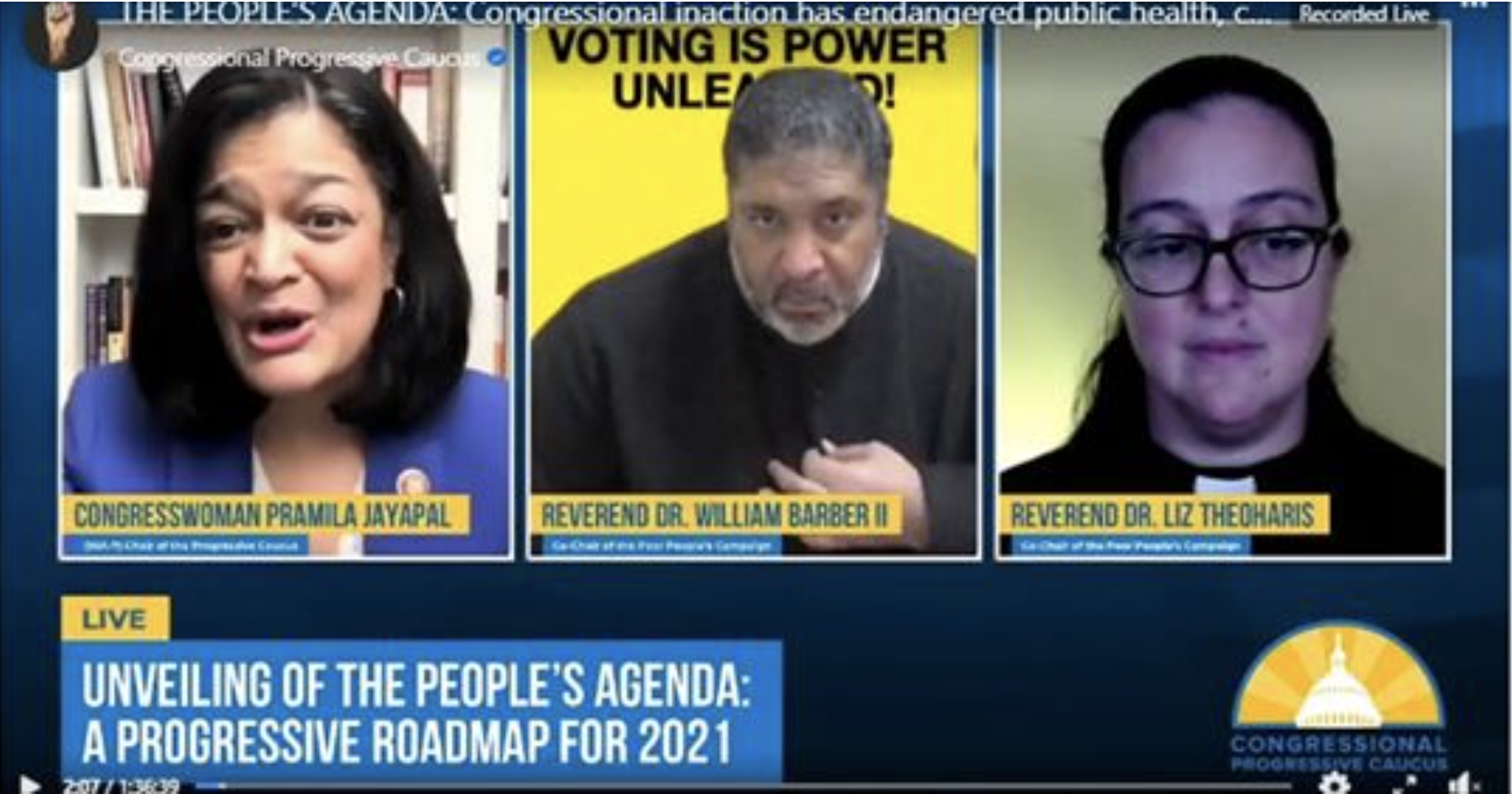 This holiday season, struggling families and businesses came close to getting a lump of coal from Congress. Only at the 11th hour, just three days before Christmas Eve and as critical relief programs were about to expire, did lawmakers manage to pass a $900 billion aid package.

The deal is a welcome stopgap. But the nearly 100-member Congressional Progressive Caucus immediately made clear that in the next session, they will be demanding much more.

As the House was preparing to vote on the modest relief package, Rep. Pramila Jayapal was leading a virtual townhall to unveil The People’s Agenda, the top legislative priorities of the Progressive Caucus for 2021. The Seattle Democrat will chair the Caucus in the 117th Congress.

The People’s Agenda begins with multiple Covid relief actions that go beyond the just-passed package to meet the immense scale of the crisis, especially for people of color and poor and low-income Americans.

The Caucus aims, for example, to provide monthly stimulus checks of $2,000, significantly more than the $600 one-time payouts the new deal offers. They also demand action on many other urgent fronts that were left out of the 11th hour deal entirely, such as hazard pay and strong workplace health and safety protections for frontline workers and debt cancellation for holders of student and medical debt.

The Institute for Policy Studies joined with Kairos, Repairers of the Breach, and the Poor People’s Campaign to analyze the potential benefits of the People’s Agenda for the country, with a particular focus on women, people of color, and poor and low-income families.

Our joint fact sheet points out, for example, that canceling up to $50,000 in student debt would erase all debt for more than three-quarters of student loan borrowers and significantly narrow racial and gender wealth divides. Black and female graduates have heavier than average debt loads — and have a harder time paying them off because of racial and gender wage gaps. The just-passed deal did not extend a moratorium on student debt payments set to expire in February.

Without debt cancellation, millions of families will face painful decisions between making loan payments or buying food and other essentials. 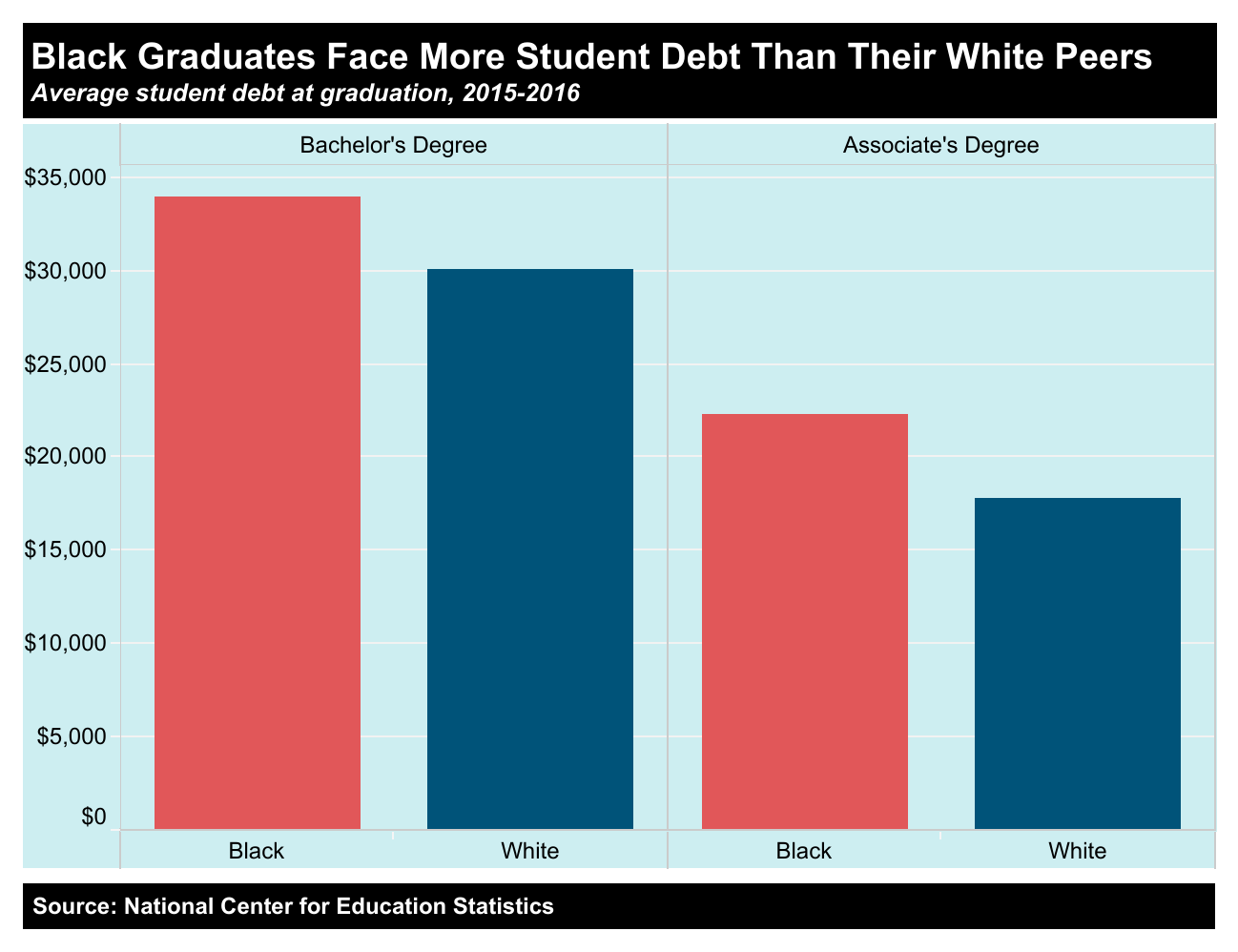 “The price of inequality is too high and the deaths from unjust policies are too many to not address,” Barber said. “The only way to heal the nation and have domestic tranquility is to first establish justice. This agenda sets us on the path towards doing just that.”

While no members of the Progressive Caucus voted against the relief package, they described the deal as “not nearly sufficient to address the enormous and growing need in our nation.”

The jobs picture has improved slightly since the initial spike in unemployment, but the pandemic recession is raging on and could worsen if Covid rates continue to surge. The official unemployed numbered 10.7 million in November 2020 — nearly five million more than in February 2020.

The vast majority of jobless Americans are low-income. In fact, the employment rate for workers earning more than $60,000 a year had returned to pre-pandemic levels by November, while the rate for those earning less than $27,000 was still down 20 percent. White Americans make up the largest number of unemployed, while the rates are significantly higher among all other racial groups.

The official unemployment rate does not include millions of Americans who’ve left the job market. Workforce withdrawal rates have been highest among women, particularly women of color, who shoulder more responsibility than men for pandemic-related challenges to family health, school closures, and other disruptions.

Providing emergency relief for the duration of the crisis is priority #1 for the Congressional Progressive Caucus. But the People’s Agenda also aims to jumpstart an equitable economic recovery that creates good jobs, gives workers more power, and accelerates the transformation to a renewable energy economy.

As our joint fact sheet points out, robust public investment in renewable energy generation capacity and energy efficiency retrofits could help the country achieve a full employment economy while reducing energy insecurity, particularly for low-income and people of color communities. The 31 percent of U.S. households who are energy insecure are disproportionately Indigenous, Black, people of color, and/or low-wealth.

A shift in transportation priorities from highways to public transit would benefit communities broadly, but most particularly people of color and low-wealth households. Only 12.5 percent of white households do not own any vehicles, compared to 22.4 percent of Latinx households and almost 33 percent of Black households. 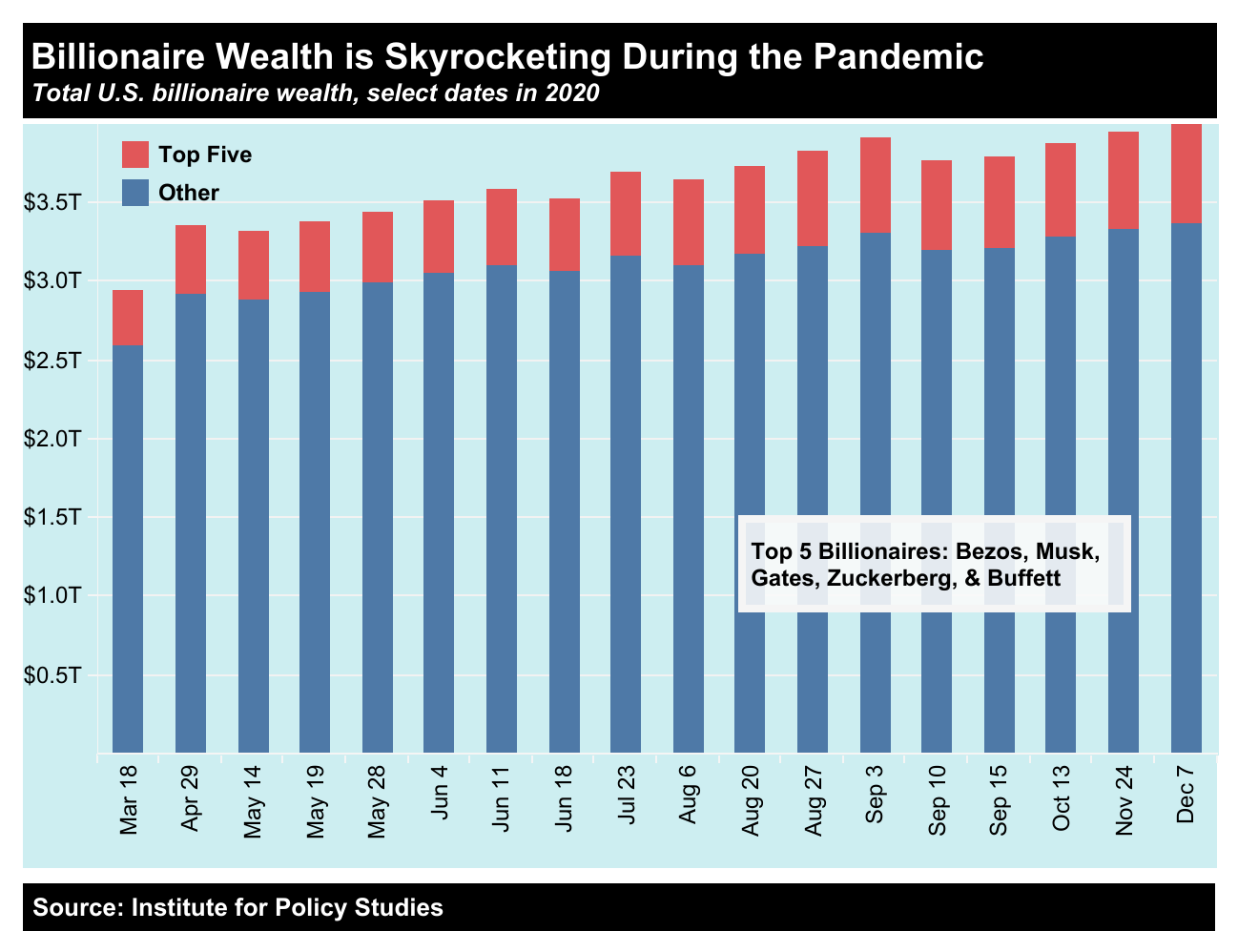 The Progressive Caucus will also be fighting to restructure our tax system to ensure that the wealthy, corporations, and Wall Street pay their fair share. Institute for Policy Studies researchers have calculated that the collective wealth of America’s 651 billionaires jumped by over $1 trillion between the beginning of the pandemic and December 7, 2020. Under the current tax code, the ultra-wealthy will pay steeply discounted tax rates on their stock market earnings, compared to the rates on income from labor.

Long before the pandemic, the nation’s wealth gap was staggering, particularly along racial lines. According to the Institute for Policy Studies, between 1983 and 2016, the median Black family saw their wealth drop by more than half after adjusting for inflation, compared to a 33 percent increase for the median white household. The Forbes 400 richest Americans own more wealth than all Black households plus a quarter of Latinx households.

The People’s Agenda also calls for cutting military spending, a move that would free up substantial resources for social programs. For example, a 10 percent cut to the Pentagon ($74 billion) could cover the cost of ending homelessness or purchasing enough N95 face masks for all of the 55 million essential workers to use one a day for more than a year, according to the National Priorities Project of the Institute for Policy Studies.

Some of proposals could be carried out without Congressional approval, including cancelling federal student loans, ending the U.S. wars in Yemen and Afghanistan, and imposing new, “high road” standards on federal contractors. By including these demands in the People’s Agenda, the Progressive Caucus is signaling that in addition to driving bold legislation, they will be a forceful advocate of an aggressive executive action strategy.

Congress and the Biden administration will need to use every tool in the toolbox to combat the challenges of our time — and make our country stronger in the face of future crises.

Sarah Anderson directs the Global Economy Project and co-edits Inequality.org at the Institute for Policy Studies. She is a co-author of Congressional Progressive Caucus Priorities: The Stakes for Women, People of Color, and Poor and Low-Income Families.

« The U.S. Needs COVID Relief and Renewable Energy, Not a Space Force