Dear U.S. Navy: Don't Dump Your Ships in Our Oceans 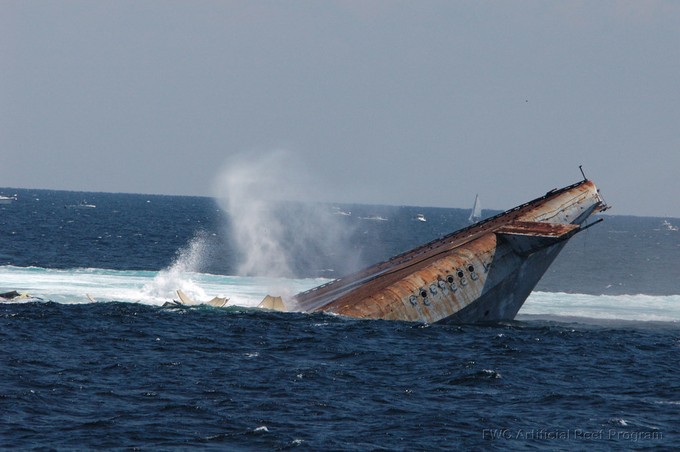 Sinking of the USS Oriskany as an artificial reef. Photo courtesy of Florida Fish and Wildlife.

For the past 40 years, the U.S. military has turned retired and decommissioned military equipment-- such as ships and tanks-- into artificial reefs, primarily as a lower-cost alternative to recycling or storing old ships. With an active force of 296 ships, and the Navy set to decommission 15 ships in 2022, the question of what to do with these behemoths is no trifle. The disposal of these ships must minimize environmental dangers. And the high costs of responsible disposal should be factored into decisions about new ship-building and weighed against other pressing societal needs.

When these large structures are sunk, they can foster algae growth and provide a habitat for fish. However, old military equipment also contains toxins, like polychlorinated biphenyls (PCB’s), and other pollutants, which pose a risk to human health and the functioning of marine environments. To mitigate these known consequences, in 2006 the EPA created guidelines for the creation of artificial reefs, requiring all substances over a certain pollutant threshold to be removed. However, these regulations are not infallible: if an object over the pollutant threshold is too difficult to remove, the EPA can approve a bypass of its removal.

The sinking of the US ex-Oriskany in 2006 is an example of the US military’s failure to critically examine the impacts of their artificial reef program. Although the military followed EPA disposal guidelines, the ship still contained around 700 pounds of PCBs when it was sunk, despite the US military spending around $20 million to clean the vessel. A study conducted partly by Florida’s Fish and Wildlife Conservation Commission confirmed the negative consequences of the ex-Oriskany sinking: elevated levels of PBCs were found in fish living within the ex Naval ship’s “reef”.

The contamination resulting from these discarded ships is just one part of a larger story of environmental destruction: the U.S. military is the world's largest institutional consumer of oil, and its carbon footprint exceeds those of many developed nations.

If the Pentagon wanted to contribute to a healthy marine ecosystem, it should slash its emissions. Reductions in carbon emissions will help to maintain earth’s marine ecosystems by curbing ocean acidification which dissolves naturally occurring coral.  Not only are artificial reefs a bandaid for the problem of coral reef destruction, they also add to the Pentagon’s atrocious record of environmental devastation,  given the high likelihood of PCB contamination.

The Navy has proposed a budget of $22 billion to build new ships in 2022 - ships that will add to the Pentagon’s fossil fuel emissions and one day require disposal of more toxic material. Instead of adding to the Pentagon’s pollution balance sheet, a better proposal is to reinvest that money into initiatives that support green infrastructure and decarbonization of the US economy. Taking that $22 billion and investing in solar power would be enough to power 35 million households, or more than one in four households in this country. Making better choices with our federal budget is essential to supporting not only the health of our marine ecosystems, but also the health of our entire planet.

Nina Merz is a Next Leader on the National Priorities Project at the Institute for Policy Studies.

To Save the Planet, We Need to Demilitarize the Police »