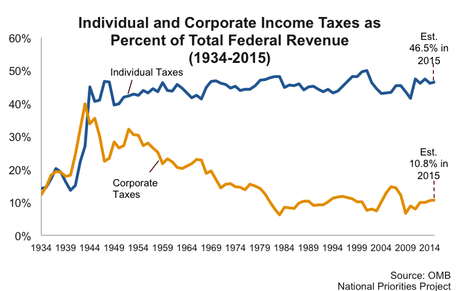 Corporate income taxes are expected to account for less than 11 percent of all federal tax revenue in fiscal 2015. Meanwhile, income taxes paid by regular Americans will account for more than 46 percent of all federal revenue.[1] These tax dollars support important programs and services such as education, clean drinking water, and public transportation. All told, federal revenues in 2015 are expected to be nearly $3.18 trillion.

Loopholes, credits, and deductions in the tax code together siphoned off $1.18 trillion in 2013, as much as the entire discretionary budget that year. And 10 of the largest tax breaks that together totaled more than $770 billion in tax savings in 2013 disproportionately benefited the top 1 percent of households. [2]

We Don’t All Pay Taxes Equally

In theory the tax code is progressive, meaning those who make more money pay higher tax rates – yet in practice that’s not always the case. As Warren Buffett made famous, billionaires sometimes pay lower rates than middle-class workers. And because the tax code is chock full of tax breaks, some corporations, like Bank of America and Citigroup, have gotten away with paying zero federal income taxes, even when they earn billions in profit—some of it from federal contracts.

The president proposes to collect $3.5 trillion in tax revenue in fiscal year 2016, an increase of nine percent relative to 2015. This increase would come from mechanisms to raise new tax revenue, through changes to taxes on capital gains and corporate profits as well as new corporate fees. This aligns well with public opinion, which shows 62 percent of Americans believes wealthy households don’t pay their fair share of taxes, while 69 percent believe corporations pay too little.[3] The president’s fiscal 2016 budget would also expand the EITC for low-income childless workers, which would benefit more than 13 million individuals and triples the current maximum child care tax credit to $3,000 per child. 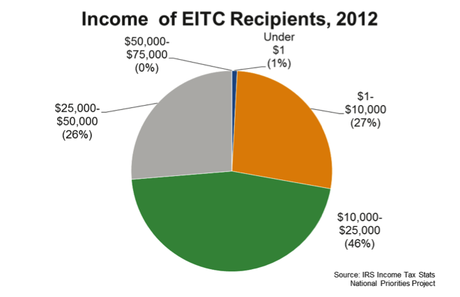 The Earned Income Tax Credit (EITC) and the Child Tax Credit are effective anti-poverty measures, lifting 9.3 million Americans, including 4.9 million children, above the federal poverty level annually, while reducing the severity of poverty for millions more.[4] These credits reduce the amount of tax that families pay and help low income families because even families that owed no income tax can get a refund. The EITC cost the federal government $66 billion in 2013, providing an average credit of $2,407 per household.[5] The EITC has support from both conservatives and liberals.

Want a personalized tax receipt for the total amount of federal income taxes you paid? Go to https://www.nationalpriorities.org/interactive-data/taxday/ – where you can also see the average tax receipt for taxpayers in your state.

More About Taxes And Revenue