Janine Jackson interviewed the National Priorities Project’s Lindsay Koshgarian about the People Over Pentagon Act for the June 24, 2022, episode of CounterSpin. This is a lightly edited transcript.

Janine Jackson: Corporate news media make little mistakes, misrepresentations that have impact. But day after day, they do something bigger and deeper that affects us all at an almost cellular level. And that is to accept and propagate the story that the United States doesn’t have enough to provide for the basic needs of its people. Some simply must suffer. But the country does have enough to sink billions of dollars into weapons of war to defend the system that, you know, demands suffering for large numbers of us.

It doesn’t make sense. And to the extent that it does, wouldn’t a humane country be challenging every penny that goes toward killing people to see if it might be used to support people?

If you ask them, the US public wants such a reprioritization. But what happens when lawmakers, people in actual positions of power, call for such a thing and attempt to outline how it might happen? 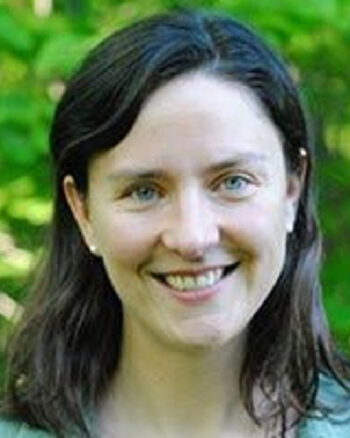 Lindsay Koshgarian: Thanks so much for having me.

JJ: I am unfortunately confident that many or most listeners don’t know anything about it. So would you please just tell us about the bill introduced by Democratic House representatives Barbara Lee of California and Mark Pocan of Wisconsin? What is that bill, and what would it do?

LK: Absolutely. It makes sense to start with our Pentagon budget and just how big it is, because, of course, the bill is about relocating some of that money. So our Pentagon budget right now, it is approaching $800 billion, and President Biden has suggested a budget that would go over $800 billion. Meanwhile, many folks in Congress are pushing for a budget that goes even above what President Biden has asked for, and what the Pentagon has said is enough.

So that’s the background. The budget as it is now is higher than it was at the height of the Vietnam War. It is higher than the next nine countries combined, some of which are our allies, and it is 12 times as much as Russia. So it’s a huge, huge amount of money.

It’s also more than half of the discretionary budget that Congress allocates every year. That means that less than half is left for things like housing assistance, homelessness programs, public education, public health, the CDC, medical research. All of these things have to fit into less than half.

So what the Lee/Pocan bill is, it’s introduced by Rep. Barbara Lee and Rep. Mark Pocan, and it suggests that we should cut $100 billion from the Pentagon budget in order to reallocate that money to other priorities. 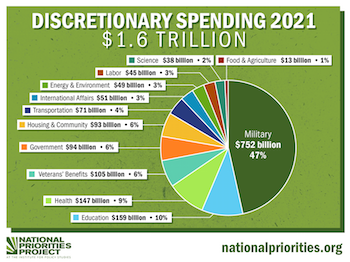 JJ: That’s an important inoculation against what you are likely to see about pulling blankets off soldiers in foxholes.

JJ: OK. Well, it’s important to say that this didn’t drop from the sky. This is not the first iteration that we’ve had. There was a Sanders/Lee/Pocan bill a couple years back. But also, it’s not just, “Hey, let’s start thinking about this.” This legislation builds on work that groups have been doing. 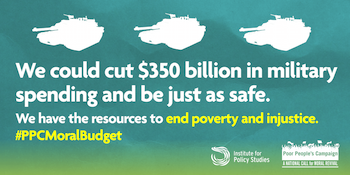 LK: That’s right. And we are one of those groups. So a couple of years back—and at that time, the Pentagon budget was smaller than it is today—we did a study where we found ways to cut up to $300 billion off of the Pentagon budget. And that was by doing things like closing some of our more than 700 overseas military installations; no other country has more than 20. It would be doing things like cutting back on some of the most expensive weapons systems, cutting back on the number of planes and ships that we have.

For example, the US military has 11 aircraft carriers. No other country has more than two with a third in the works; that’s China. So we’ve got many, many more than they have. So we can cut back some on that and still be ahead of any other country. And cutting back on things like nuclear weapons.

And then there’s also cutting back on some of the bureaucracy. One of the things that we suggested doing was shifting the military health system into a larger universal health system for all Americans.

JJ: Let me just draw you back to a point you made earlier. Some legislators want more than the Pentagon is asking? How does that make sense?

LK: Yes. This is something that actually happens year in and year out. And it comes from a couple of places. One, of course, is the military/industrial complex. Any time the military asks for fewer planes, or they ask to retire some ships, like they’re doing now, there are, of course, contractors who either build those systems or get the contracts for maintaining those systems, and the contractors don’t like that, so they always object.

Then there are the parochial political concerns. So a lot of times, if the Pentagon wants fewer of a certain ship, and that ship is made in a particular congressional district, you get opposition on the basis of that local economy, even though we know that if you took those same dollars and put them into job creation in healthcare or education or infrastructure, you could create more jobs in that local economy than by the shipbuilding or other investments in war.

So those are a couple of the big things. The contractors are immensely powerful. They take, in any given year, around half and frequently more than half of the entire Pentagon budget. It’s a huge, huge industry, and a huge problem of how much power they wield over the congressional process.

And so those are the two big reasons why you see folks in Congress pushing for more money.

JJ: Again, that reprioritization is what people, when you explain it and ask them, that’s what they want. So if it doesn’t happen, you would hope that the media story would be “Why don’t people’s desires and their basic needs translate into policy?” rather than trying to convince people that they’re too dumb to understand what needs to happen. I wonder what you would like to see more of, or less of, in terms of news media attention to these issues. 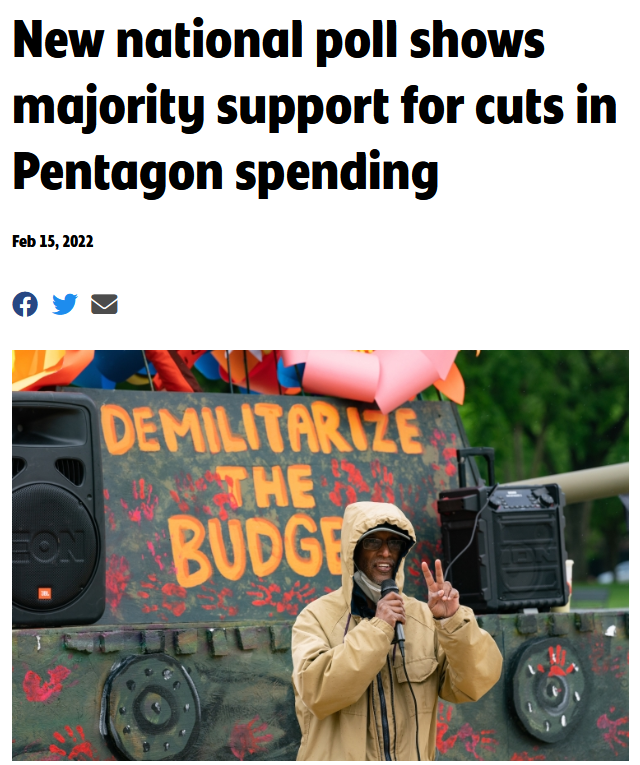 LK: Yes, it’s a great question. Cause you’re right, we have polling, recent polling, that shows that a majority of folks in this country would want to see money taken from the Pentagon and reallocated to all of the things that we know we desperately need, like healthcare, like education, like infrastructure. So we know that people are behind that, but we also know that our political system frequently doesn’t follow the will of the people.

And one of the reasons is Congress is very captured by industry. But that doesn’t mean that there aren’t things we can do about it. Being captured by industry really comes down to wanting to be reelected. And so if folks vote, and if folks communicate with their member of Congress, we can put forward very effective counter pressure toward that. So we need more of that, first and foremost.

But we also do need a media that is more accountable. They’re too credulous about threats, whether it be from China or from Russia. And both of those are threats that are overblown. China is not primarily a military threat to the United States, and so we shouldn’t respond to it in a military manner.

And Russia has proven to be both less strong militarily and, also, it is something that the entire world community can deal with, through means like diplomacy and through means like building institutions that enforce international law, and ways other than the US spending more money on our military.

So those are the kinds of things that we need to see the media asking questions about, pushing back on members of Congress and asking them if what we really need is more money for the Pentagon. 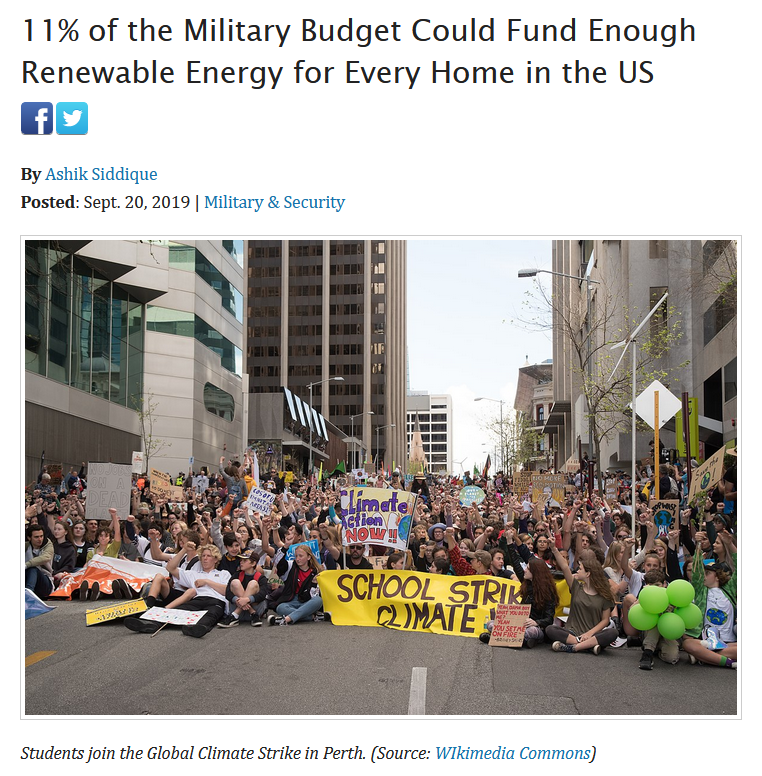 JJ: And I would just say, finally, what I would hope to see is also a building out, a talking about the other part of it, which is what it might look like to devote those resources to human needs. There’s plenty of stories there to talk about, what would various social issues and problems look like with an infusion of resources? There’s a way to tell the story that’s about what we could have.

LK: That’s absolutely right, yes. We need to see a redefining of security. The Pentagon, in theory, is supposed to be keeping us safe. But meanwhile, we still have hundreds of deaths from Covid. We are still in an opioid epidemic. We are heading into a wildfire and hurricane season that–we don’t even know how bad it will be yet, because of climate change.

Those are all things that we need for security. And we did a study as an example of the kind of things that we could be doing, if we weren’t putting so much money into the Pentagon. We found that in the 20 years since 9/11, we spent $21 trillion on supposed security. And that for just a quarter of that cost, for less than $5 trillion, we could have had an entirely renewable energy grid in this country.

And that could be done. We could have done it already. And so what we need to desperately do is make sure that in the next 20 years, we don’t make those same choices again. We need to put money where we need it to be, and solve the problems that are actually the most dire problems we have.

LK: Thanks so much for having me.