As the global economy demands increasing levels of skill, education has fallen as a share of total public spending in the United States (Figure A). In contrast, many of our international peers have expanded their investment (Figure A). Once the workforce with the greatest proportion of post-secondary degrees in the world, the US has since fallen to 12th in educational attainment.9 In 1995 the US graduated the second highest proportion of its college enrollees, but has since fallen to 13th in that regard.10 America is now on pace to produce 3 million fewer postsecondary graduates than employers demand by the end of the decade.11 In an age where the best jobs go to the best-educated workers, the next generation of Americans is starting the economic race behind international competitors. 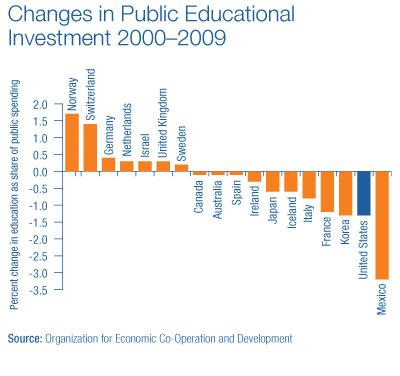 Despite the uphill climb ahead, lawmakers across the country continue to create more barriers to opportunity. States have cut higher education funding dramatically, fueling tuition spikes at community colleges and universities.12 Federal student aid has failed to make up the difference (Figure B), forcing students to bear an increasing financial burden. The maximum federal Pell grant once covered three-quarters of tuition at the average four-year public school; today it covers less than a third (Figure C). Student loans have ballooned to fill the widening gap between tuition and available aid. Americans now owe over $1 trillion in student debt,13 leaving millions of people struggling to repay loans for much of their adult lives. 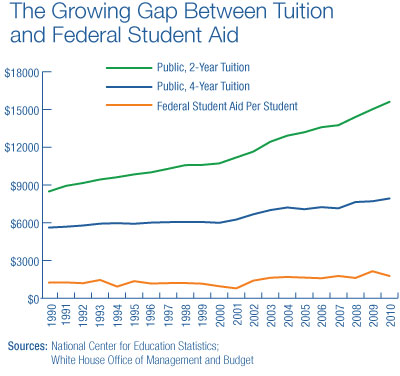 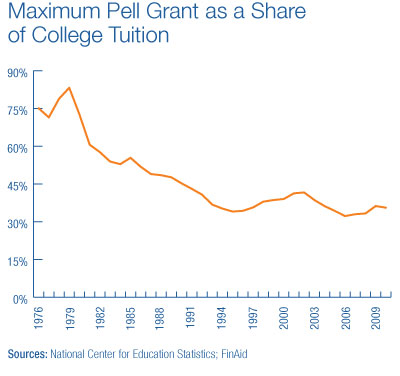 Even as education funding falls short, Congress is considering further cuts that would affect nearly every federal education program. According to the White House Office of Management and Budget, domestic discretionary programs would face an estimated 8.2 percent drop in funding if the automatic spending cuts know as sequestration are allowed to take effect.15 Though Pell grants would be exempt in the first year of sequestration, other aid for needy students would not, including Federal Work Study and Federal Supplemental Educational Opportunity Grants. TRIO, a successful grant program that helps low-income, first generation applicants and disabled students access and complete college, could lose $66 million, eliminating services to as many as 61,000 participants.16 Moreover, limited resources could hinder key functions like federal loan servicing or origination, delaying aid delivery when students make decisions about college.17 And without action by Congress, all federal financial aid including Pell grants will face cuts after 2013. Sequestration will place yet another barrier between young Americans and a quality education.

Given the scale of the challenges before us, it would be deeply counterproductive to cut education funding and make it that much harder for young Americans to achieve economic prosperity.

STEM education funding totaled $3.4 billion in 2010, which is about 12 days of Bush tax cuts for the top 5 percent of Americans.

The fields of Science, Technology, Engineering, and Mathematics (STEM) are among the highest-paying and fastest-growing sectors in the US and global economies. Yet here, too, America has fallen behind. American students underperform their counterparts in Canada and China — among other nations — in math and science,18 and too few young Americans finish college with marketable skills in these fields. Demand for STEM workers in the United States outstrips supply,19 driving up wages in STEM fields to more than 50 percent greater than the median wage overall (Figure D).

Federal investment in STEM education totaled $2.84 billion in Fiscal Year (FY) 2012.20 Total STEM funding looks feeble compared to total educational spending; we underinvest in these fields even as they offer some of the greatest opportunity for young people to earn a healthy salary and contribute to the 21st-century economy (Figure E). Moreover, looming budget cuts threaten to shave more than $200 million from STEM programs in 2013. Such a reduction would set back young people already struggling to acquire skills in these important fields and would further reduce our international economic competitiveness. 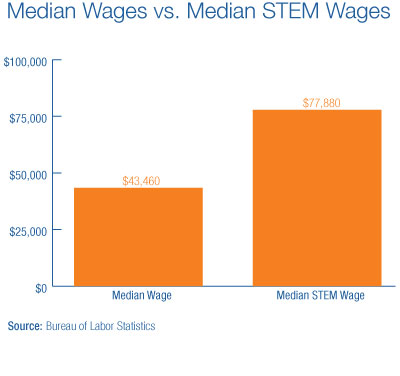 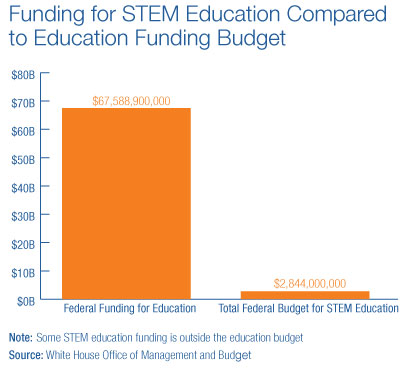 10 OECD, "Indicator A3: How Many Students are Expected to Finish Tertiary Education," (OECD Publishing, 2012lishing, 2012), Table A3.2, http://www.oecd.org/edu/educationataglanceindicatorsrawdata.htm.

14 Federal Student Aid per student includes all student aid accounts in subfunction 502 (higher education) as reported in OMB’s Public Budget Database. Omits negative subsidies and downward re-estimates of subsidies. Totals for 2005 and 2006 have been adjusted to exclude aggregate consolidation of loans that occurred during those Fiscal Years in advance of loan terms that changed on July 1, 2006, as those consolidations did not constitute additional aid to students.