National Priorities Project updates trillions in tax breaks, who benefits, and why it matters for you.

The federal tax code includes hundreds of tax breaks (called tax expenditures within the federal government) meant to encourage activities that lawmakers deem beneficial to society. From the perspective of the government, tax breaks are no different from any other kind of government spending. In both cases, the U.S. Treasury has less money, and a government activity – whether subsidies for home buying, repairs to an interstate highway, or tuition support to college students – receives funding.

In 2013, the cost of tax breaks was equal to the entire U.S. discretionary budget [1]. However, the discretionary budget is subject to an annual appropriations process, where Congress debates the proposed spending. Tax breaks, on the other hand, remain on the books until lawmakers modify them. As a result, over a trillion dollars a year in lost revenue – more than 1.6 times the 2013 budget deficit – goes largely unnoticed. 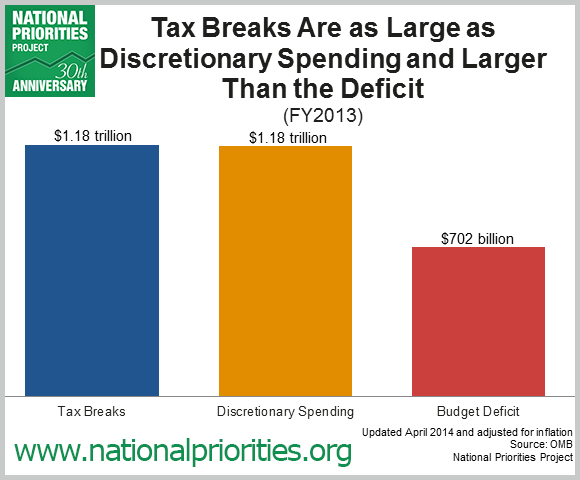 Tax breaks deserve just as much oversight and public attention as the rest of the federal budget. Every dollar the government spends on a tax break is a dollar it can’t spend elsewhere – whether on early-childhood education, environmental protection, or infrastructure improvements. Yet few Americans are aware of how much spending occurs through the tax code or who benefits.

The cost of corporate tax breaks has trended upward in recent decades, totaling nearly $176 billion in fiscal 2013. In other words, the overall U.S. corporate tax bill was $176 billion lower than it would have been without the special deductions, credits, and exclusions written into our tax code. To put that in perspective, that’s about $1,328 per U.S. household. [2]

The largest corporate tax break allows multinational corporations to defer paying taxes on offshore profits, costing the government $65 billion in 2013 alone. That comes out to $494 per household. [2]

Tax breaks for individual taxpayers exceeded $1 trillion in fiscal 2013, but all individuals do not benefit equally. Major tax breaks that totaled more than $770 billion in tax savings in 2013 are tilted heavily in favor of the top income earners. According to the Congressional Budget Office, 17 percent of the benefits from major tax breaks go to the top 1 percent of households. [3]

In fact, the Tax Policy Center estimated that 4,000 taxpayers in the top 1 percent owed no income tax at all in 2013, thanks in large part to tax breaks that helped them reduce their tax liability down to zero. [4]

Washington Contemplates Reform – And You Can Have a Say

However, in this election year, it’s unlikely that Congress will pass comprehensive tax reform. Instead we may see less sweeping changes, perhaps enacted as part of the budget. Sixty-seven percent of Americans want a budget that closes corporate tax loopholes and limits tax breaks for the wealthy. [7] Here’s how the current budget proposals stack up: [8]