Tax Day 2016: Seven Surprising Things You Should Know About Taxes 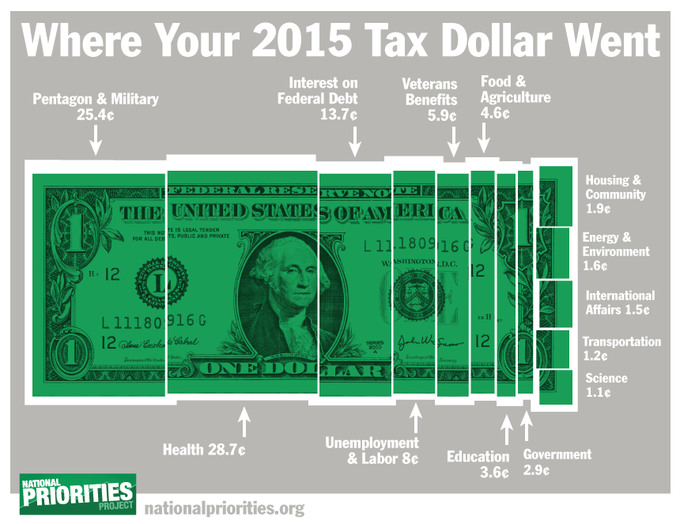 1. Look around. Those are your tax dollars at work.

The federal budget is roughly $4.2 trillion, and the vast majority of that comes back to our states, cities and towns. Our taxes support health care, clean drinking water, education, the national weather service, highways and bridges, and national parks, and so much more. Across the nation, about 30 percent of state revenues come from the federal government, paying for health care, transportation, schools and more.[1] To see how federal money impacts your state, visit State Smart.

Meanwhile, corporate income taxes make up less than 11 percent of federal revenue, down from a high of almost 40 percent in 1943.

Whatever you pay, the federal budget belongs to you and all Americans.

Want a personalized tax receipt based on taxes you paid for 2015, including how much you paid for programs like SNAP (food stamps), nuclear weapons or renewable energy? Visit our tax receipt. You can also see the average tax receipt for taxpayers in your own state.

4. You might pay a higher tax rate than billionaire Warren Buffett.

It’s true. In theory the tax code is progressive, meaning those who make more money pay higher tax rates – yet in practice that’s not always the case. In some cases, billionaires can pay lower rates than middle-class workers.[3] And some corporations, like Bank of America and Citigroup, have gotten away with paying zero federal income taxes, even when they make billions in profit.[4] And that’s because the tax code is chock-full of tax breaks.

5. Our government gives away as much in tax breaks as the entire discretionary budget.

Wealthy taxpayers are way more likely to benefit from tax breaks than average or lower income individuals or families. Ten of the largest tax breaks that together totaled more than $750 billion in tax savings in 2013 overwhelmingly benefited the top 1 percent of households, with 17 percent of the benefits going to those top earners.[5] Here's one reason why: to take advantage of tax breaks, you need to itemize your deductions on your tax return. Only 16 percent of households making between $25,000 and $30,000 itemize tax deductions, while nearly 100 percent of those making over $200,000 do[6] To learn more about tax breaks, check out our interactive tax break analysis.

6. But, some tax breaks go straight to working families.

Most tax credits are “nonrefundable”, meaning it is possible for them to reduce your taxes down to zero, but they can’t also result in the Treasury sending you a check on top of that.

But a couple of tax credits are “refundable,” meaning after your taxes have been reduced to zero, you still may get a check. The Earned Income Tax Credit (EITC) and the Child Tax Credit (CTC) are refundable, and are widely seen as effective anti-poverty measures, helping to combat inequality.[7] While such measures alone won’t eradicate inequality, they’re important – and widely supported – tools in the fight against inequality.[8]

7. Tax rates change all the time, and they can change again.

Today’s highest tax rate for the wealthiest Americans is 35 percent, but there’s nothing magic about this number. It’s only been the top tax rate since 2003. If you go back to just the 1960s, 70s or 80s, the top tax rate was much higher – between 50 and 91 percent. Only in 1987 did it come down below fifty percent.

Restoring the top rate even to modest 1990s levels – somewhere around 39 percent – would make a big difference to how much we could afford to invest in things like health care, education, transportation and infrastructure – all the reasons we have taxes to begin with.[9]