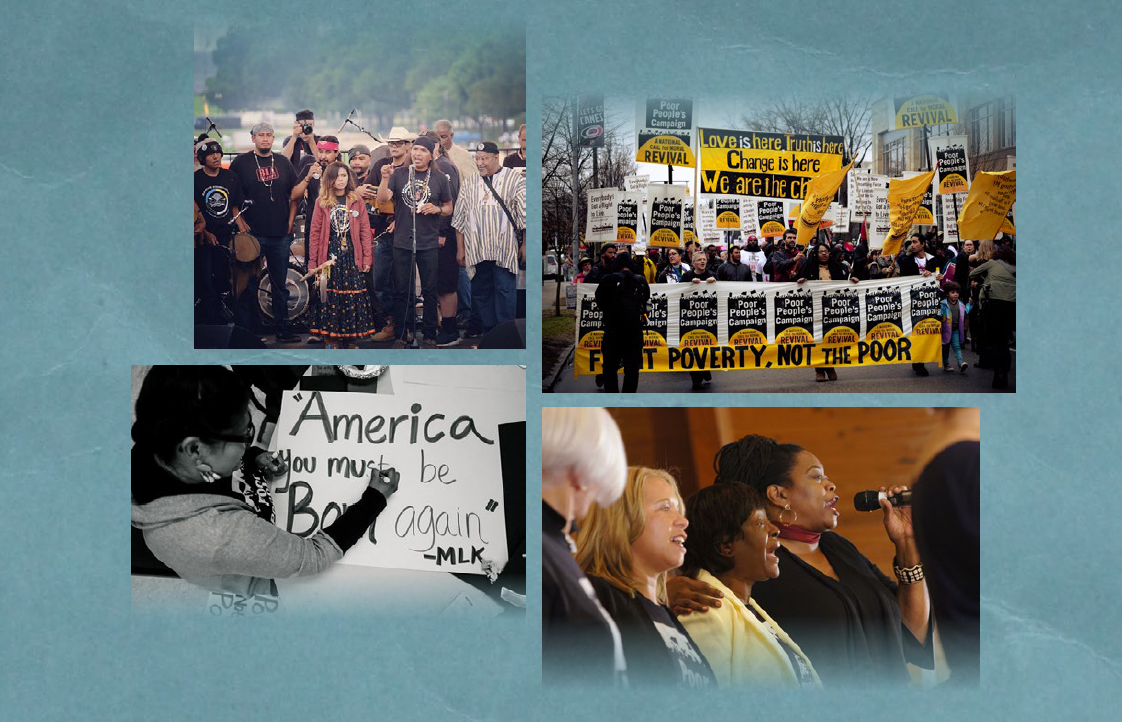 In April 2018, the Poor People’s Campaign: A National Call for Moral Revival released a Moral Agenda and Declaration of Fundamental Rights. The demands contained within that document present a comprehensive response to the systemic racism, poverty, ecological devastation, militarism, and war economy plaguing our country today. For the 140 million people who are poor, or one emergency away from being poor, we know these demands are necessary.

In the Poor People’s Moral Budget, National Priorities Project and our colleagues at the Institute for Policy Studies, together with the Poor People’s Campaign, the Kairos Center, and Repairers of the Breach ask, given the resources of our society, whether these demands are also possible. Our answer is a resounding yes.

In the seven sections of the Moral Budget, we look at policies and investments for seven critical areas of the Poor People’s Moral Agenda: 1) democracy and equal protection under the law; 2) domestic tranquility; 3) peace and the common defense; 4) life and health; 5) the planet; 6) our future; and 7) an equitable economy. In each case, we’ve found that our nation has abundant resources to meet the demands of the poor, and to address the widespread and systemic injustices we face. In contrast, the current realities of voter suppression, low and inconsistent wages, insecure access to health care and other basic needs, wealth inequality, war, and climate change are far costlier than we have been led to believe.

This Budget shows that it is possible to invest our resources in the ways demanded by this Campaign and our moral and Constitutional values: to establish justice, domestic tranquility, security, and the general welfare for all. It shows, too, just how wasteful systemic injustice is. The abundance of our society will grow even greater when we stop investing in maintaining injustice to benefit the few, and turn instead to policies based on the needs of the many.

The United States has abundant resources for an economic revival that will move towards establishing a moral economy. This report identifies:

The below comparisons demonstrate that policymakers have always found resources for their true priorities. It is critical that policymakers redirect these resources to establish justice and to prioritize the general welfare instead. The abundant wealth of this nation is produced by millions of people, workers, and families in this country and around the world. The fruits of their labor should be devoted to securing their basic needs and creating the conditions for them to thrive.

At the same time, policymakers should not tie their hands with “pay-as-you-go” restrictions that require every dime of new spending to be offset with expenditure cuts or new revenue, especially given the enormous long-term benefits of most of our proposals. The cost of inaction is simply too great.

1. Investments in Democracy and Equal Protection under the Law. Enfranchising voters, protecting our elections, and reforming our immigration system are moral necessities, and would yield huge economic benefits.

2. Investments in Domestic Tranquility. True domestic tranquility is only possible when our nation meets the needs of its people and ensures access to good jobs and adequate incomes for people who aren’t working. Lifting poverty wages, restoring the safety net, and guaranteed employment rebuilding our infrastructure would put trillions of dollars every year into the pockets of those who need and deserve it most.

3. Investments in an Equitable Economy. Fair taxes on the wealthy, corporations, and Wall Street could pay for a substantial share of the proposals in this report.

4. Investments in Life and Health. In a country with as much wealth as ours, no person should suffer or die for lack of adequate health care. And a system that covers everyone would actually save money.

5. Investments in Our Future. Simply restoring pre-2018 corporate tax rates, along with a tiny tax on Wall Street trades, would easily cover childcare support, free college, and other investments we’ve failed to make in our children.

6. Investments in our Planet. Investing in a clean energy transition — and in basic resource rights like clean water — would create jobs, save trillions, and address the needs of the poor and people of color who are already feeling the worst effects of climate change.

7. Investments in Peace and the Common Defense. Shifting our foreign policy toward peace and diplomacy, and away from military-first responses, would make our world safer – and put hundreds of billions back on the table for security at home.

These comparisons illustrate that we don’t lack for resources at all. The problem is that we invest our resources in priorities that fail to meet the needs of millions of people whose potential is being thwarted, whose lives are being minimized, and who are dying unnecessarily through violence and neglect. These misplaced priorities are not only damaging our social fabric, they are moving us towards a fundamentally unstable economy.

The policies presented in the Moral Budget begin to move us towards a different reality, where we can realize the full potential of our most valuable resource — the strength, genius, and creativity of our fellow human beings. Investing in these demands will fundamentally reorient our economy to be on track with our deepest moral values, and build a new foundation for prosperity for all.

There is a far better way forward, and it is within our reach.