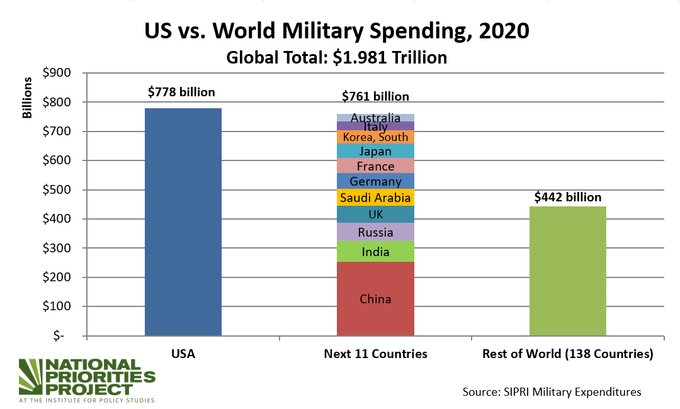 May 28, 2021 - The Biden administration today released their final budget proposal for fiscal year 2022. Today’s budget proposal rightly calls for major increases in domestic investment. But at the same time, its continued funding increases for the Pentagon undermine the prioritization of real security and human needs over corporate profit and greed.

“It has been more than a year since COVID plunged the United States into a catastrophe unlike any in living memory, killing hundreds of thousands and leaving millions more in poverty, at risk of hunger and homelessness. It is unconscionable at such a time to send billions of dollars more to profit-seeking Pentagon contractors. And it is beyond short-sighted, as the pandemic rages on around the world, to believe that our security can be guaranteed by spending billions on expensive weapons systems,” said Lindsay Koshgarian, Program Director of the National Priorities Project at the Institute for Policy Studies.

The president’s budget request takes what should be a “peace dividend” from the withdrawal of troops from Afghanistan and squanders it on costly weapons and military bloat, by perpetuating the nuclear weapons threat into a new century with the new ICBM and throwing good money after bad for the F-35 jet fighter, a money pit that has gone billions of dollars over budget and has yet to meet expectations.

At the same time, the world is at the precipice on climate change, where each year of delay can have catastrophic consequences and global cooperation is more important than ever before. And yet this budget spends mere millions reducing the carbon footprint of the U.S. military, which is responsible for more fossil fuel emissions than many countries, and billions more on aid to foreign militaries than on global climate aid.

The National Priorities Project at the Institute for Policy Studies fights for a federal budget that prioritizes peace, economic opportunity, and shared prosperity for all.

The National Priorities Project helps Americans understand where their tax dollars are going, and explore how Pentagon spending could be put to better use for domestic priorities.