President Biden is set to release an initial view of his budget request, which will include setting a new target for Pentagon spending. Before the number is revealed, it's worth a look at Pentagon spending trends in recent years. 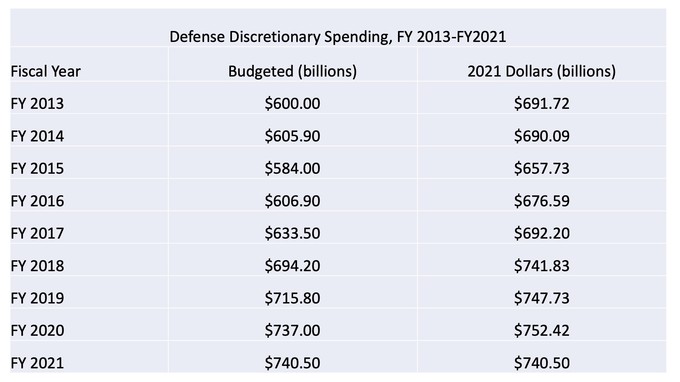 The first thing to notice is that all of these numbers are astronomically high. For comparison, during every single year from 2013 to 2021, Pentagon spending was higher than at the height of the Vietnam War or the 1980's military buildup. And it is a lot higher: the 1980s peak was about $630 billion in today's dollars, and the Vietnam War peak was shy of $500 billion. Spending during peacetimes was, of course, even lower.

The second thing to notice is the slight downward trend from FY 2013 to FY 2015, mostly due to the constraints of spending caps under the Budget Control Act. But then, even with the Budget Control Act still in effect, the money budgeted for the Pentagon started on a steady climb, reaching a whopping $740 billion in FY 2021.

Progressives have called for an immediate ten percent Pentagon spending reduction, to be followed by greater reductions. That would take real spending closer to where it was under President Obama for FY 2022. We'll soon find out whether President Biden will stick with the Trump increases, build on them, or begin to tear them down.

« If Impoverished Countries Can Host Millions of Refugees, the US Can Welcome a Few Thousand