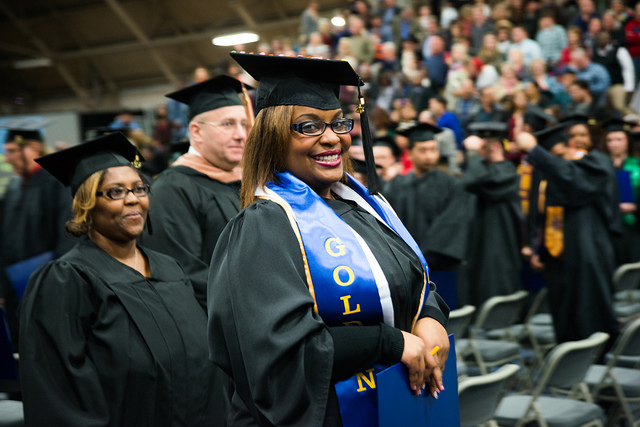 Earlier this week, President Obama signed an executive order that will allow more student borrowers to become eligible for a program that caps monthly payments based on their income. This would especially help out recent grads who are in low-paying jobs, working in unpaid internships or other positions, and those who live in cities with high costs of living.

Senator Warren (D-Mass.) also introduced a bill this week that would allow students to refinance their student loans as one would refinance a car or a home. The bill would help students take advantage of lower interest rates, though it is currently stalled after being shot down by Senate Republicans on Wednesday.

Why Are Students Facing More Debt?

One reason is that government support for public education has been declining in the face of widespread budget cuts at the federal level. Out of $3.97 trillion in federal spending proposed for 2015, only two percent -- $80.9 billion -- is allocated to education, with support for higher education just a fraction of that total.

Strapped for cash, state governments force their public universities to compensate for limited resources by charging more from students. Concurrently, the federal government has reduced the proportional value of Pell Grants, which provide scholarships to undergraduates from low-income families. In 1979, Pell Grants provided nearly 90% of the value of a college tuition; in 2009, they amounted to less than 30% of tuition costs.

These spending cuts combined with increases in higher tuition means that more than 7 in 10 college seniors are graduating with student loan debt. Our nation now owes a staggering $1.2 trillion in outstanding student loan debt, compared to just $300 billion a decade ago.

To put it into perspective, if the United States had an extra $1 million every year that we could dedicate to helping students pay off their loans, it would still take us more than one million years to eliminate that collective debt.

What’s more, studies old and new show that students who are saddled with student loan debt after graduating college are less likely to own a home, pursue graduate school or start their own business, and are more likely to delay marriage and families of their own. This year, student loan debt will average nearly $30,000 per student, all of which typically needs to be paid off over ten years. If recent graduates continue to delay homeownership and entrepreneurship for years to come, we would see economy-wide effects.

Bottom line, even if you don’t know anyone of college age, the manner in which our nation approaches support for higher education affects you. As the next generation of citizens, innovators, entrepreneurs, and leaders, today’s students are the future of our nation. Many people believe that investing in young people today is the most important thing we can do to ensure the productivity and strength of our nation in the coming years.

The Hidden Story: It’s All About Trade-Offs

What would it take to increase investment in educating the next generation? Well, let’s put it in perspective: In 2014, the federal government will allocate $8.45 billion of Americans’ tax dollars to fund the F-35 Joint Strike Fighter Aircraft, the most costly weapons system in history – and one that many in the Pentagon don’t even want.

If that $8.45 billion were instead used to provide Pell Grants, we could give one million students an annual grant of $5,500 towards their college tuition, and still have a couple billion dollars left over.

Alternatively, based on the estimated cost of American public universities, we could provide one million full scholarships for just one-third of what we will spend on Foreign Aid in 2014 ($23.03 billion).

Another way to illustrate these choices is tracking how much we spend per hour on competing priorities. Every hour, taxpayers pay $60.71 million for the Department of Defense, compared to just $8.16 million per hour toward Education.

What it all comes down to is trade-offs. We must choose wisely between the competing budget priorities of education, military, foreign aid, health care, and many other social, economic, and security needs. No less than the future of our nation is at stake.

« Hack for Western Mass 2014: Introducing a Culture of Civic Engagement