Wielding the Power of the Purse 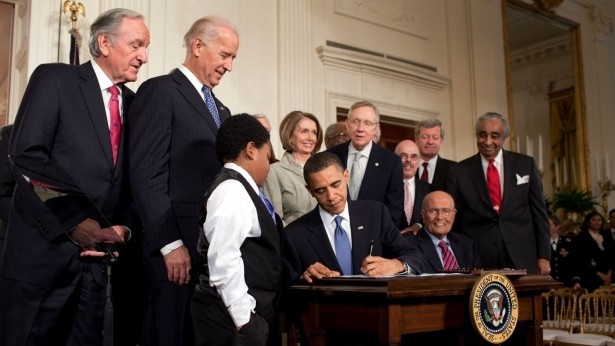 If you’ve been following the immigration debate, or if you caught the news that the House of Representatives filed its Affordable Care Act lawsuit against the President on the Friday before Thanksgiving, you may have noticed that strategies in both fights hinge on the so-called “power of the purse.”

The power of the purse is based right in the Constitution, which says that “No Money shall be drawn from Treasury, but in Consequence of Appropriations made by Law….”

Aside from displaying the founders’ penchant for capitalizing, this translates as: the government can’t spend its money unless Congress passes a law saying so. We outline the process in its full glory here.

So are these two battles really about who controls the purse strings?

Executive action on immigration and the Affordable Care Act (ACA) have two things in common: they both require an expenditure of federal money to work, and they are both highly controversial.

In the case of the ACA, the federal government provides subsidies to insurers to offset decreases in fees for lower income people. According to the lawsuit, Congress never appropriated those funds.

In the case of immigration, some Republicans are looking for ways to stop the executive order allowing temporary legal status by cutting off funding to the agency that would process applications. But that agency is funded by application fees, and it’s not clear that Congress’ power of the purse can extend to something that’s not funded by tax dollars.

In both cases, wielding the power of the purse has become a convenient way to get at policy positions that some lawmakers don’t agree with.

And what do Americans want? On immigration, even though President Obama’s executive action was controversial, the underlying issue is not: 88 percent of Americans want to provide a responsible path to citizenship for aspiring citizens who are here illegally.

On the Affordable Care Act, 63 percent of Americans want to see the law improved, not repealed.

Our Constitution and budget process deserve respect. And so do the opinions of ordinary Americans. Congress should wield its power of the purse to see the will of Americans done.

« NPP Gives Thanks for the Federal Budget