Money in Politics and Climate Change: Your Top Issues for the Republican Debate 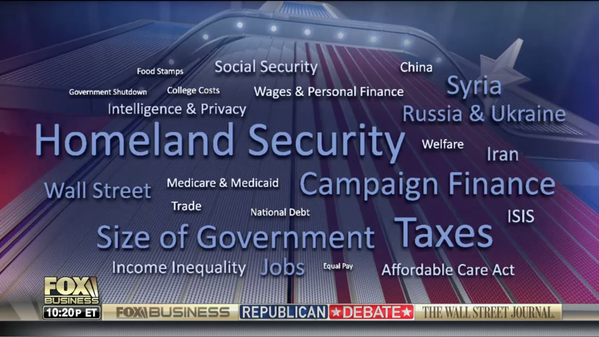 If you took our poll about what topics you wanted to see covered in Tuesday's presidential debate, you probably said that you wanted to hear about climate change, and money in politics.

So, did you get your wish?

Money in Politics in the GOP Debate

In two hours, the moderators posed not a single question about money in politics, or campaign finance. This is despite the fact that Fox news (which hosted the debate) showed campaign finance as one of the top issues of concern (see word cloud photo above), right up there with homeland security, taxes, the size of government, and jobs.

Let alone proposing any real solutions to an issue of great concern to many Americans. At Tuesday's debate, money in politics wasn't even acknowledged as a problem.

Climate Change in the GOP Debate

What didn't appear on the Fox news word cloud, but did come up in the debate, was climate change.

A growing majority of Americans across the political spectrum believe that climate change is real, caused by humans, and that we should do something about it. But you wouldn't know that listening to the debaters:

And former Governor Jeb Bush immediately began talking about the importance of energy for the economy, but not in the way you might think, by noting the terrific potential of renewable energy to create jobs. Instead, he seemed to argue that somehow just growing the economy would fix climate change: "High growth is the path to lower carbon, and more jobs."

And that seemed to cover the span of thinking on climate change at this debate.

With a Democratic debate coming up on November 14 and another Republican debate on December 15, let's hope we get to hear more thinking about not just climate change, but some serious thinking about money in politics too.

What did you think about Tuesday's debate?

Peace for Beirut, Paris and the World »