Minimum Wage at $4.25 per hour?! This is not the help Puerto Rico needs. 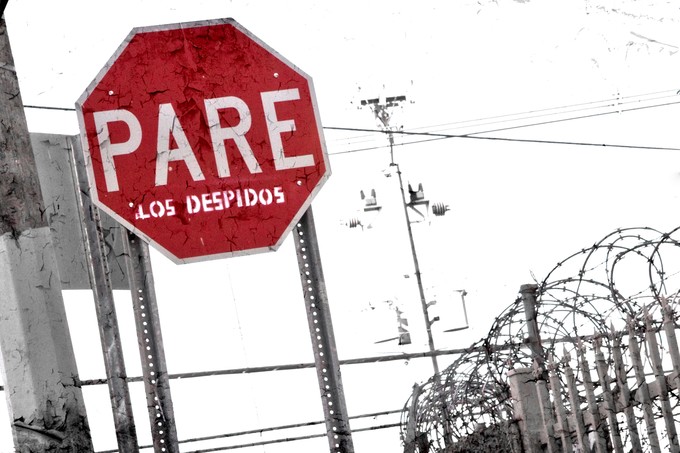 Photo courtesy of ep_jhu. “Stop the lay-offs” in reference to tens of thousands of fired government employees around 2009.

Imagine having to live on $4.25 per hour with even higher living expenses. Sounds impossible, doesn’t it? This could be the reality in Puerto Rico for thousands of young people under 25 if the bill HR 4900, known as the Puerto Rico Oversight, Management, and Economic Security Act (PROMESA), passes. This Act could force U.S. citizens, many who are already struggling with student loan bills and families into even worse poverty.

Puerto Rico is in a severe economic crisis, but this bill is not the solution. If enacted, PROMESA would establish a President-appointed financial control board with powers that surpass all the democratically elected officials in Puerto Rico. What? Congress, we need help, not to be further impoverished and treated like second-class citizens.

By the way, Congress, weren’t you involved in the making of this crisis?

Yes, Puerto Rico’s irresponsible borrowing and governmental inefficiency is the easiest to point to when asking why the debt is so great. Things like crime, corruption, the poverty cycle, the “brain drain”, and high living cost have also contributed to the creation of this humanitarian crisis.

Yet, it seems to me extremely unfair that the people who are going to suffer for these mistakes are the ones who can’t afford to, and the ones that didn’t even have the opportunity to choose these bad policies. When Puerto Ricans on the island can’t vote in U.S. elections that shape P.R.’s policies, politics, interactions with other countries, economy, way of life, culture, and future, how is it that a big part the solution to this problem is to appoint a financial control board that surpasses all political power on the island? How it is that the young and poor, those with little to no political power, are the ones that will suffer most? Ultimately, the result of this policy will be even more migration of young workers, and will worsen the situation on the island.

Gigi Litovich is working with NPP as a research and development student intern. She is a rising senior at Smith College, majoring in Government and minoring in Public Policy. Born and raised in Puerto Rico, Gigi is interested in Latin American and Caribbean studies, social justice, and intersectional feminism. This post is the first in a series about Puerto Rico. The viewpoints contained do not necessarily reflect the positions of the organization.

« 3 Alarming NDAA Provisions You Should Know About

Hiroshima and the Hope President: Ask President Obama to Lead Us Toward a Nuclear Free World »