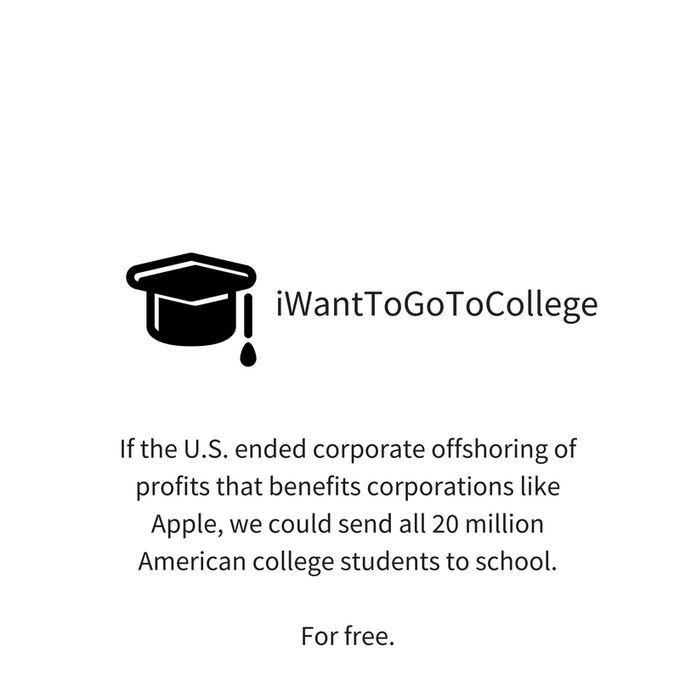 Remember when Apple’s slogan was “Think Different”? Well, the ruling is in, and it turns out Apple is just your run of the mill corporate money machine, having benefited from illegal subsidies in Ireland.

That’s the ruling of a European Union commission that said that Apple must pay the equivalent of more than $14 billion in back taxes. Apple had established a “headquarters” in Ireland that amounted to a legal trick – just a way to route profits to a country with the most loopholes to exploit.

While this was technically not what’s known as a corporate inversion, it’s part of the same broken system. In too many cases, corporations just need to make the right friends (in this case, Ireland) and learn the right complicated pattern of shuffling papers to avoid paying billions in taxes.

Apple will pay the back taxes to Ireland – unless other countries step up with legitimate claims that the profits in question should be taxable by them instead. Even the U.S. could lay claim to some of the tax dollars.

But, odds are, it won’t. The Treasury Department has complained about the EU decision, which is a shame -- and flies in the face of decisions earlier this year to try to make corporate tax avoidance harder.

If the US worked harder to close corporate tax loopholes – not even all of them, just the ones that allow US-based corporations to stash profits offshore – we could use the resulting revenues to give every current American college student a full, four-year scholarship to a public university.

Happy birthday, Estate Tax! Where would we be without you? »