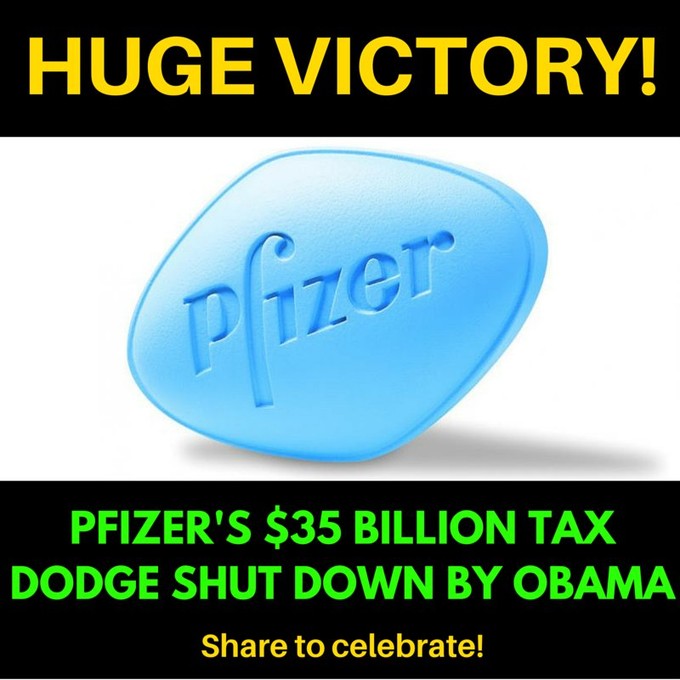 You pay your fair share in taxes. But many of our most profitable corporations don’t. As the Panama Papers scandal is making clear, tax evasion is a global problem that contributes to inequality on a grand scale. But this week, because of good old-fashioned democracy in action, the Treasury Department put a giant roadblock up for U.S. corporations trying to skip out on their tax responsibilities.

Just days after the Treasury department announced the rule change, a planned merger between U.S. drug company Pfizer and Irish drug firm Allergan was cancelled. The merger would have allowed Pfizer to legally move its headquarters overseas, without actually moving so much as a paperclip. Such a move – when a U.S. corporation sells itself to a smaller corporation in a country with a lower corporate tax rate – is known as an “inversion.” It’s good for the corporation and its shareholders, and bad for taxpayers.

The Pfizer merger with Allergan would have been the biggest corporate inversion ever.

Over the last month, we joined with other concerned citizen groups to launch a petition to the White House asking President Obama to act to stop the Pfizer merger through executive action. Our goal was 100,000 signatures – enough to ensure a White House response. Instead, we got over 200,000 signatures in one month.

And the White House responded. President Obama spoke against tax inversions. The Treasury department issued its new rules. And Pfizer cancelled its plans.

The president also called for action from Congress. The Treasury rule change makes corporate inversions less profitable, but it doesn’t stop them entirely. Only legislation from Congress can do that.

Which is just one more reason we’ll keep working to enact a budget and tax code that works for all Americans.

« Webinar: Do You Know Where Your Tax Dollar Went?