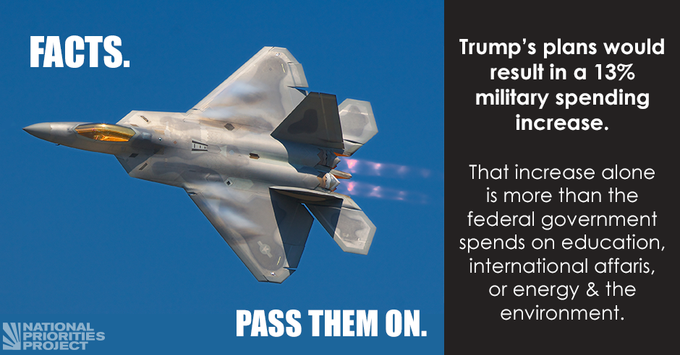 Pentagon contractors celebrated this week at the prospect of even more government dollars headed their way. From Election Day to Tuesday the 15th, stock prices for military aerospace and defense companies rose nine percent.

For all of the president-elect’s lack of policy clarity, his position on Pentagon and military spending has been pretty clear: it’s headed higher. While specifics are scarce, a reasonable rough guess of how much military spending might increase under a Trump presidency is about 13%, or $80 billion.

For context, an increase of $80 billion is more than the federal government currently spends on education ($72 billion), all of international affairs ($43 billion), or energy and the environment ($43 billion).

For further context, this proposed increase comes at a time when Pentagon and military spending is already at historically high levels. As President Obama leaves office, military spending is still at one of the highest levels in recent decades. Though it has decreased since the height of the Iraq war, it is still higher than under President Reagan’s Cold War build-up or than at any other time in the last 40 years.

As a candidate, Trump sometimes called for a more limited role for the U.S. military around the world. He even expressed uncertainty (“I’m hearing that our existing planes are better”) about the wisdom of the Pentagon’s largest weapons program, the F-35 fighter jet.

But so far, his apparent restraint (or isolationism) and skepticism of the Pentagon’s largest weapons program have not translated to calls for lower spending. Despite calling for other countries to do more, his spending plan would easily keep the United States as the top military spender in the world.

What would we get for the money? More ships, more aircraft, more questionably effective missile defense, more nuclear warheads and bombers, and a bigger Army and Marine Corps – whose purpose is seriously unclear as they would in theory not be sent to fight abroad.

None of this likely translates to more safety. And it certainly doesn’t address the economic insecurity that allegedly motivated so many voters this election.

But hey, look at those military industry stock prices. At least somebody’s happy.

Thanksgiving: He/She voted the other way. How can I face them? »