Cut off the Pentagon Funds and Stop the March to War 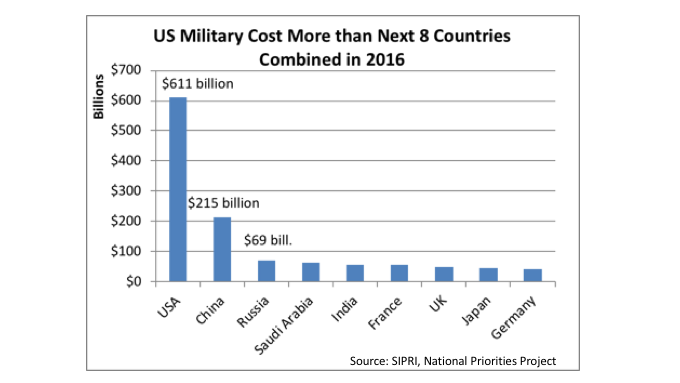 In the State of the Union address, the president listed a slew of countries and non-countries he named as threats to "our interests, our economy, and our values."

He then says that "unmatched power is the surest means of our defense," and seemingly earnestly demands that we must "fully fund our great military."

Setting aside the question of whether threats to our economy are proper justification for making military threats, direct or implied (after all, when have they not been), we must ask: if our military is not fully funded now, when will it be? We spend more than the next 8 countries combined. We spend nearly three times as much as China, nearly nine times as much as Russia, and North Korea and ISIS don't even rate on this scale. U.S. military spending is higher than the entire GDP of Sweden. Our Pentagon is a country unto itself.

President Trump will propose a $716 billion military budget for 2019. That would be an 18 percent increase  (without adjusting for inflation) over the last budget passed under President Obama.

This is a president and military ramping up for war, in a country that has had more than enough. There's no other justification for the military spending Trump wants. One way to stop his march toward war is to cut off the funds.

« This Martin Luther King Day, Militarism, Racism and Poverty are Still With Us

Congress Strikes a Deal for 54% Military Spending in Federal Budget »