This Martin Luther King Day, Militarism, Racism and Poverty are Still With Us 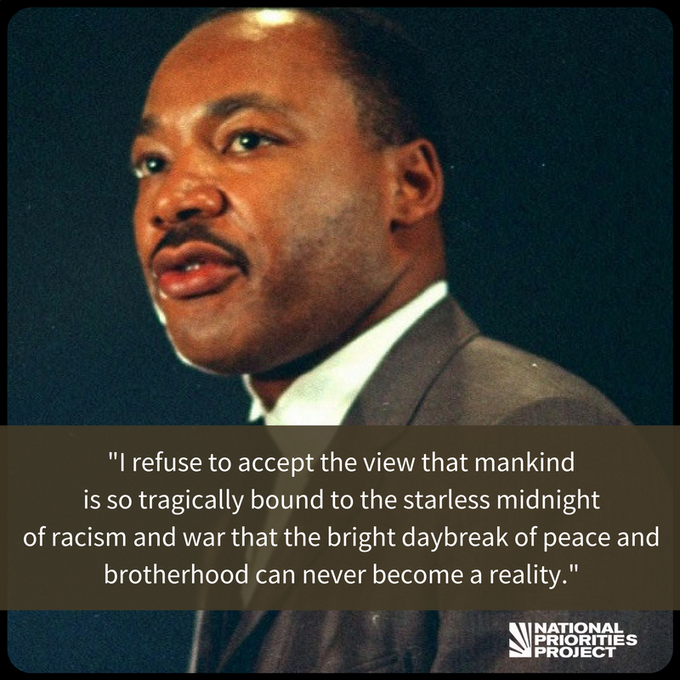 Is the United States doomed to keep making the same mistakes?

On this Martin Luther King Day, our nation faces dangerous precipices on multiple fronts: a leader who would drag us into a pointless and devastating war with North Korea; representatives who will push tax cuts for corporations with one hand while taking health care from the most vulnerable among us with the other; a growing acceptance of intolerance toward immigrants and people of color who stand (or kneel) for their rights; and an entire political movement that is proudly indifferent to the danger to humanity posed by climate change.

Fifty years ago, Martin Luther King Jr. diagnosed America's sickness: “When machines and computers, profit motives and property rights, are considered more important than people, the giant triplets of racism, extreme materialism, and militarism are incapable of being conquered.”

Our current leadership clearly places profit and property above people. The triple evils of militarism, racism, and poverty are alive and well, along with sexism, xenophobia, homophobia, transphobia, ableism, environmental destruction and many more.

Dr. King’s words seem as relevant today as they did then: “If we do not act, we shall surely be dragged down the long, dark, and shameful corridors of time reserved for those who possess power without compassion, might without morality, and strength without sight.”

We recognize that without us, the forces of militarism, racism, poverty and environmental destruction and all the others will dominate our story. But we won’t let that happen.

On this Martin Luther King Day, we celebrate the movements that strive for justice, peace, and equality: from Black Lives Matter to #MeToo, from the peace movement to Standing Rock, and so many more, we’ve seen the power of individuals who choose to stand up to the evils that are still with us today.

And this year, we will witness the launch of another movement, a new Poor People’s Campaign, modeled after Dr. King’s fledgling campaign fifty years ago: a campaign that calls out the triple evils of militarism, racism and poverty by name.

There is so much left to do. Thanks to all of you who keep us marching.

« Tax Reform This Bad Only Comes Along Once in a Generation

Cut off the Pentagon Funds and Stop the March to War »