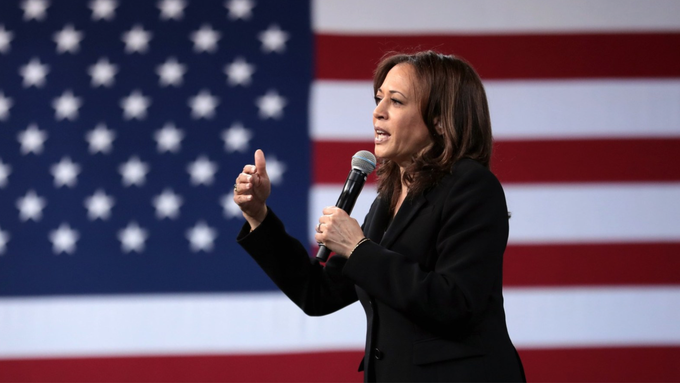 Senator Kamala Harris speaks at the Poor People's Campaign presidential forum in Washington, D.C. Senator Harris is in the line-up for the second night of the Democratic primary debates.

Ten candidates answered questions on a range of topics from five moderators at the first Democratic presidential debate last night. Here's what the candidates and moderators didn't say, but should have.

If you blinked you could have missed it: the lightning round question on the greatest “geopolitical” threat facing the United States. Each candidate answered in just a few words.

But it wasn’t the right question. What are our most urgent threats and challenges across the board? Death by poverty or lack of health care is many times more likely for Americans than any terrorist or military threat.

Our greatest threat isn’t likely to be one we can beat back with tanks and guns. How about climate change? Economic inequality? Or even fascism and growing nationalism around the world? It would have been fair game for any of the candidates to turn the question around and acknowledge outright that many of our greatest threats – poverty, inadequate health care, and racism – aren’t actually “geopolitical” in nature, and certainly can’t be met with military means.

Iran and the nuclear deal:

The Iran nuclear deal remains a success story for diplomacy over war – a bold example of what we can achieve when we decide war is not the answer. As recently as a few weeks ago, a report by the UN nuclear monitoring agency said that Iran continued to complywith the terms of the nuclear deal, a full year after the United States unilaterally pulled out of the dealand reinstituted devastating economic sanctions on Iran.

The Iran nuclear deal may have been imperfect, but guess what else is imperfect? War. American’s reliance on war over diplomacy predates the withdrawal from the Iran deal, and it’s something that needs more analysis and attention if we’re to learn from our own history.

Strangely, after the Iraq war in particular weighing heavily in the 2008 election and coming up again in 2016, ending our forever wars came up mostly as a sidebar to other questions, including one about whether the U.S. has an obligation to intervene in genocide. To be clear, the beginning of our current wars of nearly 20 years had nothing to do with genocide.

These wars have cost hundreds of thousands of lives, sent 20 million people packing from their homes, and left the U.S. on the hook for nearly $6 trillion and counting as our wars go on without end. That’s enough to have provided full health insurance for every uninsured and underinsured American since the beginning of the Iraq war.

Our forever wars warrant more than a follow-up question, even in a tight debate format. Moderators of future debates must do better.

The full Pentagon budget – at $716 billion, a budget higher than at the peak of the Vietnam War and higher than at any time under Ronald Reagan – didn’t come up at all. And despite talk of corruption and the influence of special interests in politics, nor did the Pentagon contrators who soak up half of this budget each year.

We’ve called for as much as $350 billion per year in Pentagon cuts to fund priorities like health care for all, clean energy and a Green New Deal, free college and job creation for struggling communities. We could make these cuts and be even safer by cutting things like overseas bases and our forever wars that stoke resentment and arms races around the world. At the Poor People’s Campaign Moral Congress presidential forum just last week, 7 out of the 9 candidates who agreed to take questions from poor people went on the record supporting Pentagon spending cuts.

But it won’t happen if no one talks about it.

« The Pentagon's Climate Impact Is a Threat to Our Planet