The Pentagon's Climate Impact Is a Threat to Our Planet 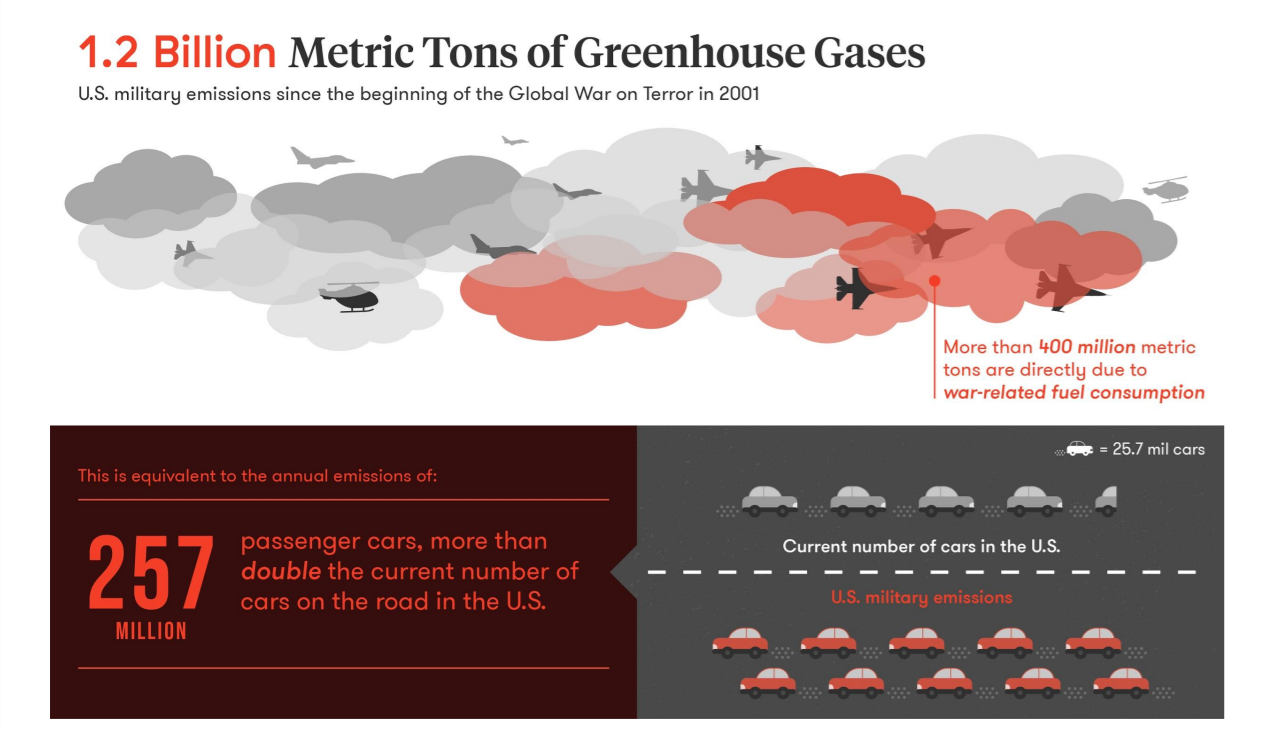 America is under attack.

By terrorists? Hardly. It surely isn’t ISIS that’s causing unprecedented floods in the Midwest, wildfires threatening 1 billion acres of land on the West coast, or the uptick of tornadoes in the South.

Actually, given newly available data on the Department of Defense’s carbon emissions, it would appear that the US military itself has been a major force behind the climate issues attacking most of the country.

In a new study published by the Watson Institute at Brown University, researcher Neta C. Crawford calculated an estimate of the total amount of greenhouse gas emissions  between 2001 to 2017 by all branches of the Department of Defense at an earth-shattering 1.2 billion metric tons. That’s equivalent to the amount of carbon emitted in one year by double the amount of cars in the US.

And it’s not just America that’s under attack, it’s the entire world. Record setting heat waves have set the tone for Summer 2019, and scientists predict that as these heat waves intensify over the next few decades, they will endanger entire ecosystems and civilization itself.

These heat waves are also predicted to kill between 110 to 2,720 people in 15 US cities annually by 2030 - depending on how high we allow temperatures to rise. Another study commissioned by 20 governments in 2012 found that climate change is already  killing 400,000 people around the world annually.

Given this, one might expect our government to respond with efforts to combat climate change, since it has already killed thousands of Americans. And sure, there are plenty of articles floating around daily about Representative Alexandria Ocasio-Cortez’s Green New Deal, showing the potential for some substantial action on the subject.

But what have the majority of our benevolent elected leaders and the gracious corporate executives they’ve appointed to various executive positions actually been doing about the climate? Well, they’ve been pumping $712.5 billion into our military last year, as opposed to the $1.7 billion they shaved off for renewable energy programs. Not to mention the paltry $8 billion we grant the Environmental Protection Agency that we’ve been working on cutting, it is very clear that they are deliberately ignoring humanity’s greatest existential threat.

The newly proposed National Defense Authorization Act adds $8 billion to the Pentagon’s budget. With that money, we could have created 110,000 clean energy jobs that would not only make progress toward combating climate change, but also progress toward a more peaceful world.

Instead of going toward our safety like funding sustainable energy would, funding for the military tends to go missing, toward bombs that blow up packed school buses, and usually ends up in the pockets of defense corporation executives earning an average of over $20 million a year off of the continuation of war.

With the amount of influence the defense lobby holds over Congress, it’s no surprise that the Department of Defense often get the largest slice of the pie when it comes to discretionary federal spending. We must vehemently demand that Congress cuts the military budget in half, reallocates that money toward creating green infrastructure and promoting peace, and disempower the defense contractors who are killing the planet.

Our lives are at stake. My life, your life, the lives of everyone you know, love, and care about. This is far, far more than a political issue. Elites within the US military are actively, knowingly destroying the world we live in, all so a few people can enjoy living like this. What are you going to do with that information?

« Introducing the Poor People's Moral Budget: Everybody Has the Right to Live