The U.S. Spends More on Its Military Than 144 Countries Combined 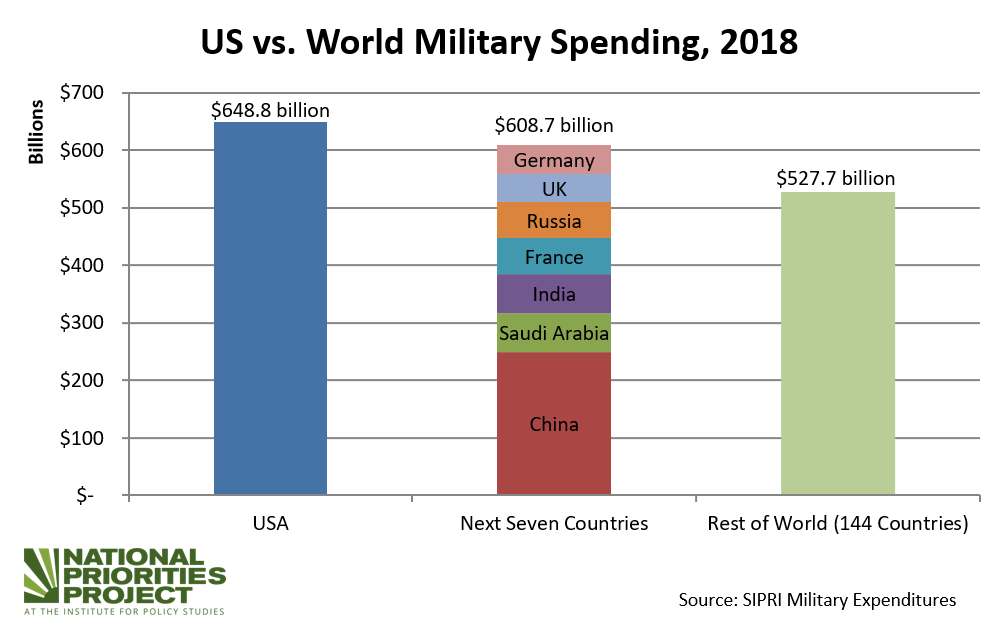 That’s how much more money the United States spends on its military than 144 other countries combined, according to the latest update to available data on military expenditures compiled by the Stockholm International Peace Research Institute (SIPRI). That’s not to mention the number by which the United States also outspends the next 7 largest military budgets combined: $40.1 billion.

Both of these numbers are stark increases from last year’s differences. Yet, there appears to be no clear threat to the US that would warrant such a dramatic increase in spending. So let’s think about how this $121.1 billion, which could have instead provided 11 million veterans with decent healthcare according to our budget trade offs tool, is being spent.

We’re running 800 military bases in 80 different countries, most of which are generally unsupervised in their carbon emissions — so not only are we making the world less safe with our enormous military presence, but we are also literally in the process of making our world uninhabitable.

As a result of our military actions overseas, at least 244,000 Afghan, Iraqi, and Pakistani civilians have been killed in horrific ways, including tens of thousands of children. These are at least 244,000 more reasons to have a conversation about what exactly we celebrate every year on Memorial Day.

Lastly, one would assume all of this military action would at least be in the interests of the American people. Not so. In fact, our reliance on military spending has damaged many sectors of the economy and prevented us from funding government functions that actually help people.

This is both a short-term consequence, in that the opportunity to invest in other industries is lost and hundreds of thousands of potential jobs squandered, and also long-term, as every dollar invested into the military instead of, say, education, or clean energy programs, is a dollar invested into the destruction of our planet and the continued drone bombing of weddings.

Well, half of the Pentagon’s budget goes to the private military contractors that provide the goods and services that the Pentagon buys. And much of that money ends up in the pockets of the corporate executives who run those companies, as opposed to the actual troops themselves, or veterans. That suggests that the elites running the Pentagon have other uses in mind for all of that money — like supporting defense CEOs who fly around with, not one, but two, private jets.

It is safe to say that most of that money does not support the troops, or operations that benefit most people in the United States. Let’s be honest about where our money is really going, and start having conversations about how we could redirect that money toward projects that protect our planet and all of its inhabitants, not just a privileged few.

This article was corrected from an earlier draft stating that the United States spends more on its military than 176 other countries combined. SIPRI data from 2018 includes military budget totals available from 152 countries, so this number has been corrected to 144.